DETROIT -- Old stars, young studs, it doesn't make a
difference. When it comes to All-Star games these days, the
American League always wins. 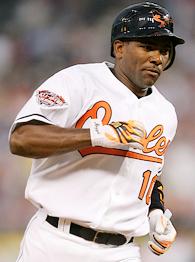 Miguel Tejada, Mark Teixeira and their AL teammates gave the
same old result to a new-look All-Star game.
Tejada, the game's MVP, homered off John Smoltz to start the
scoring, Teixeira added a two-run drive off Dontrelle Willis and
the AL overcame Kenny Rogers' bumpy inning to beat the National
League 7-5 Tuesday night for its eighth straight win.
"Tejada got us off to a great start and we were able to just go
with it from there," said AL catcher Jason Varitek, one of four
players from the World Series champion Boston Red Sox in the
starting lineup.
Mark Buehrle got the victory, striking out three during two
scoreless innings for an AL staff that mostly made Comerica Park
live up to its reputation as a pitcher's park in an era of hitter's
havens. The AL had a shutout going into the seventh, when Rogers
gave up a two-run homer to Andruw Jones, prompting more boos for
the Texas lefty, playing while appealing a 20-game suspension.
AL manager Terry Francona, who led the Red Sox to their first
title since 1918, had an odd turn in the ninth inning: He got to
bring in Mariano Rivera of the New York Yankees, who ended the game
by striking out Morgan Ensberg for his second All-Star save.
"I heard Johnny Damon say something like, `Come on Mo,"'
Francona said, referring to the Red Sox center fielder. "I looked
at him and I said, `I bet I never would have heard you say that.'
It was OK. You know what, for one night, it was pretty cool."
The AL made it 3-0 since the change in 2003 that gave the
All-Star-winning league homefield advantage in the World Series.
"We hope we make it this year," said Tejada, the Baltimore
star who was selected the game's MVP.
Rivera would prefer the Yankees, who wasted a 3-0 lead against
Boston in last year's AL championship series, host the Series
opener on Oct. 22.
"Everything's possible," he said.
Tejada, Teixeira and Buehrle were among 13 players getting their
first All-Star starts in a game nothing like the famous 1971
classic about two miles away at Tiger Stadium. Eighteen future Hall
of Famers played in that one, and six of them homered -- including
Reggie Jackson, who hit the stunning shot off the light tower on
top of the roof.
The most famous player in this one was Houston's Roger Clemens,
who a month shy of his 43rd birthday pitched a perfect fifth
inning, retiring David Ortiz, Garret Anderson and Tejada. The
Rocket entered and exited to hundreds if not thousands of flashing
camera bulbs aimed at him by the crowd of 41,617 in the wide,
cavernous ballpark, which opened in 2000.
"To see the guys here for the first time was great," said
Clemens, an 11-time All-Star first selected in 1986.
The most infamous player was the 40-year-old Rogers, who was
booed loudly when introduced and tipped his cap to the crowd as he
looked ahead stone-faced.
"I don't hold anything against anyone," he said.
Rogers was penalized by baseball commissioner Bud Selig for an
outburst last month that sent a television cameraman to the
hospital and prompted a police investigation.
"I wanted to pitch," Rogers said. "I didn't pitch last year
in the game, and I think at this stage in my career it's something
that's not expected from me."
Francona didn't hesitate to use him.
"Kenny made a mistake," Francona said. "I'm not supposed to
sit in judgment."
Exactly 50 years to the day after the funeral of Arch Ward, the
Chicago Tribune editor who invented the All-Star game, the starters
entered the field with Hollywood glitz, coming out from a red
carpet set up behind the plate.
Smoltz dropped to 1-2 in All-Star play, tying the record for
losses -- he lost in '89 and got the NL's last victory in '96.
Overall, the NL leads 40-34-2.
"This was certainly a fun one that I'll remember forever -- to
go out there in front of friends and family, in my hometown,"
Smoltz said. "I wanted to have fun -- I wasn't going to get caught
up in results."
There were an All-Star record five double plays, including three
turned by the AL. After Bobby Abreu, the record-setting winner of
Monday's Home Run Derby, opened the game with a single, Tejada made
a fancy flip to second base on Carlos Beltran's grounder to
shortstop that started the first double plays.
"They made the pitches, made the plays," said the NL's Tony La
Russa, who dropped to 3-1 as an All-Star manager. "To me, that's
the difference in the game."
NL shortstop David Eckstein threw out the swift Damon from the
outfield grass starting off the bottom half. Eckstein's father,
Whitey, was hospitalized Sunday with a kidney ailment and was taken
off a respirator a couple hours before the game.
Tejada homered off Smoltz leading off the second, a 436-foot
drive that landed in the middle of the seats beyond the left-field
bullpens.
Ortiz's RBI single to the base of the right-field wall and
Tejada's RBI grounder made it 3-0 in the third against Roy Oswalt,
and Ichiro Suzuki hit a two-run single off Livan Hernandez in the
fourth.
Teixeira's homer in the sixth boosted the lead to 7-0. While he
leads the AL in home runs with 25, they all were hit off
right-handers. The switch-hitter doesn't have any in 85 at-bats
against lefties.
"Left-handed right now I'm getting a lot more at-bats," he
said. "I feel more locked in."
Jones, tied for the major league home run lead with 27, hit his
second All-Star homer following one in 2003. Miguel Cabrera added a
run-scoring grounder off Joe Nathan in the eighth, and Luis
Gonzalez hit an RBI double in the ninth off B.J. Ryan and scored on
a grounder by Carlos Lee.

Game notes
Houston's Brad Lidge struck out Melvin Mora, Mike Sweeney
and Anderson in order in the seventh. ... The AL's winning streak
wraps around the 7-7, 11-inning tie at Milwaukee in 2002.