PITTSBURGH -- One strike away.

You aren't supposed to win games like this, when you're down to your final strike with one of the greatest closers in history holding the baseball.

You aren't supposed to win games like this when a game-tying double with two outs in the ninth has just taken a fateful hop into the stands and forced that tying run to U-turn back to third base.

You aren't supposed to win games like this just because no team has ever won an All-Star Game like this.

Not when it was one strike away from losing.

But then the great Trevor Hoffman decided it was the wrong time to throw one more changeup Tuesday night, just like the 2.7 billion he's been tossing up there for the last 14 seasons.

So Hoffman sent a fastball floating toward home plate. And Michael Young, one of baseball's buried treasures, inside-outed it into the open spaces in right-center field. And a sold-out stadium tried to make sense of what it was witnessing here.

One run would score. Two runs would score. Michael Young would pull into third with a triple he'll be running out for the rest of his lifetime. And the American League suddenly, improbably, was going to win an All-Star Game unlike any of the 76 that came before it.

One strike away one moment ...

Only once in history had a team been losing an All-Star Game with two outs in the ninth and managed to come back to win. That was in 1941, when a gentleman named Ted Williams turned defeat into triumph with one of the most fabled All-Star home runs ever hit. 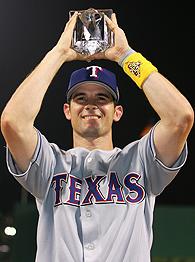 But Williams was ahead in the count that day, 2 and 1. So his team never reached the crisis point that another American League All-Star team would reach 65 years later.

Nearly an hour after he'd stood at home plate in that pressurized moment, Michael Young stood at his locker, knowing his name was being etched into an All-Star Game MVP trophy -- and knowing exactly what that meant.

Asked how many of these All-Star Games he once watched as a kid, he replied: "I watched them all -- every one I could."

So if he'd been watching one of those games in another time, in another place, and he'd just seen somebody do this, he was asked, what would he have thought?

"Well," he laughed, in deference to Hoffman, "it depends on if I was a Padres fan or not."

But he wasn't a Padres fan in this time, or this place, or this moment. So it was beginning to dawn on him what had just happened here.

Trevor Hoffman rolled into this All-Star Game with one blown save in 25 chances. He'd allowed four earned runs all season. Four.

So how did this happen?

But then you think about this some more. You think that three years ago, another southern California closer -- Eric Gagne -- had roared into an All-Star Game with no blown saves in 31 chances. Eric Gagne then gave up a game-losing home run to another infielder from Texas, a guy named Hank Blalock.

So it's almost spooky that on another All-Star Tuesday in 2006, another infielder from Texas pulled another game-winning magic trick out of a very similar bag.

Asked if he'd heard from Blalock yet, Young chuckled: "Well, I haven't checked my phone yet. But someone might have called, though."

Thanks to Blalock then, thanks to Young now, thanks to two blown saves by closers who had blown a total of one save in 56 other chances, the American League has somehow gone a full decade without losing an All-Star Game. That's the second-longest streak in history (behind an 11-year streak by the NL from 1972 through '82).

And if the NL couldn't win this game, you have to wonder if it will win another one in this century.

Before the ninth, a spectacular assemblage of AL firepower had gotten a piddly four hits all night. They'd brought precisely one hitter to the plate all game with a runner in scoring position. They'd failed to get two hits in any inning, against seven different NL pitchers.

And now the best relief pitcher in the National League, one of the most efficient closers who ever threw a baseball, was going to finish them off.

But in the AL dugout, where 20 players still stood on the top step, Derek Jeter was pulling out his Ouija Board.

"I called it," Jeter would say later. "Ask anybody around me. I called it even before we got anybody on base. I said, 'Michael Young is going to win this game.' "

Was this, he was asked, because Jeter was ready to go to work for the Psychic Hotline?

Oh. But he wasn't going to hit here unless somebody got on. Two somebodies, to be exact. Those two somebodies had to give Michael Young a shot.

The first two hitters, Jermaine Dye and Miguel Tejada, went down faster than you could say, "See ya in Queens for the seventh game of the World Series." But then it was Paul Konerko's turn.

All Konerko did was thunk a fastball on the hands toward third base. All he did was hit what felt like a routine "5-3" putout in your program. When the ball left his bat, in fact, Konerko thought: Game over.

But then he looked up to see the third baseman, Miguel Cabrera, guarding the line. And the baseball hopped on through the left side.

It would turn into one of the most important hits of Konerko's career. But all it really was, he'd say later, "was just luck."

"Hey, 20 years from now," said his locker-room neighbor, A.J. Pierzynski, "he'll be telling his kids he hit it so hard, he almost knocked Cabrera down."

"Twenty years from now?" Konerko laughed. "How about two days from now?"

Should they really have been guarding that line? Even Hoffman wouldn't second-guess his manager for a day, Phil Garner.

"You can't second-guess positioning,'' Hoffman said. "If I bore it in a little more, maybe they hit it where he is on the line. Those things are out of my control. I'm not going to point the finger at anything like that. That's for sure. They had nobody on and two outs. I have to get the job done.''

Next up was Troy Glaus, coming off a Home Run Derby embarrassment in which he'd hit precisely one home run in 11 swings the night before. Glaus had spent enough time in the NL West to know hitting off Hoffman here would be no fun.

"I can only remember one other hit I ever got off him, and that's it," said Glaus, who was in fact 1-for-3 lifetime off Hoffman. "His track record speaks for itself. We're talking 420 saves, man. The only thing I'm thinking, first and foremost, is: Don't make the last out of the All-Star Game."

And he didn't, sizzling an 0-1 changeup through the ionized night, deep into the left-field corner. It was all set to be a game-tying double until the baseball gods took over, high-hopping this ball into the left-field seats. So instead of a tie game, it was second and third, two outs.

"Obviously, [pinch-runner] Jose [Lopez] was going to score there," Glaus said. "But at least we extended the game and gave us a chance. And the guy coming up next gets 220 hits a year for a reason."

The guy coming up next isn't a household name in anyone's household east of about San Antonio. But 5½ years into his career, he has already zoomed past 1,000 career hits. And the only AL hitters with more hits than Michael Young since 2001 are guys you may have heard of -- Ichiro Suzuki, Miguel Tejada, Derek Jeter and A-Rod.

But two pitches into this at-bat, it didn't look like the defining moment of Young's career. He was down in the count, 0 and 2. And 40,000 people were on their feet. And, as Young carefully smoothed the batter's box with his spikes, Hoffman stared at him from 60 feet away, with the look of a man ready to get this over with.

He was one strike away.

This was the kind of situation that had made Trevor Hoffman the future Hall of Famer he is. No balls. Two strikes. His time. His count. He has run up 30 0-and-2 counts so far in the regular season. The guys he's run them against are 2-for-30.

But this time, his catcher, Atlanta's Brian McCann, had a feeling Young was looking changeup. So he called for an 0-2 fastball.

Young roped it toward the mighty Allegheny. And you could feel the forces of the universe shifting.

Hoffman admitted afterward he might be thinking about the changeup he didn't throw for a long, long time.

"It's something I might contemplate tonight,'' Hoffman said. "You've gotta go with your bread and butter, and my 86-mph hour heater isn't going to scare too many people sometimes.''

But then again, there isn't much of anything that scares Michael Young, a man who will never again float below anyone's radar screen.

But Michael Young also knew that Ted Williams was no author. He was the greatest hitter of his day, and maybe any day. And he was a hitter who once smoked an All-Star Game home run that turned a game, and a country, upside down -- a home run so famous that even a 29-year-old shortstop from Texas still remembers "everything" about it.

And now that's not all he's got. He's got an All-Star Game memory for the ages. He's got a highlight reel some other All-Star might find himself recalling at some other locker 20 or 40 or 65 years from now. And for now, Michael Young has a hit on his résumé that no one else who ever played in any All-Star Game can match.

Because his team was one strike away.