SAN FRANCISCO -- Let's get this straight right from the first sentence: There's nothing "wrong" with the Home Run Derby.

Check those ratings, friends. More people now watch the Home Run Derby every summer than watch your average division series game. For that matter, we'd bet more people now remember what unfolds in the Derby more vividly than they remember what happens in the All-Star Game itself. Think about it. Scary, isn't it?

So we're not here to fix the Home Run Derby. No need. It isn't really broken.

But that doesn't mean we can't make it even better, more fun and more watchable than it already is. So we're here to offer our invaluable guidance, absolutely free of charge -- via this handy-dandy list of Five Ways to Improve the Home Run Derby.

Some of these ideas are more serious than others. You'll probably have no trouble telling which are which. But in case you're not sure, here's this important announcement:

We're kicking off this piece with an idea we love, and one we've floated -- to massive acclaim -- to lots of baseball people for the past two years.

So we don't care if everybody on earth ignores the last four suggestions. We'll start with one we hope they'll think long and hard about:

1. Inject more drama into the finals

The issue: The Derby finals have become downright anticlimactic.

The solution: Inject a little ebb and flow with a back-and-forth "nine-inning" game between the two finalists.

If you think back on your favorite Derbies of yesteryear, we bet you'll notice there's one portion of the festivities you reminisce about least: 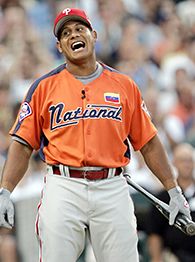 Why? Because the way the finals are structured now, the ambiance has a distinct let's-get-this-thing-over-with-already aroma. And that's easily avoided.

It can be avoided by dumping the format of the first two rounds -- when each hitter gets 10 outs uninterrupted by anything other than an occasional gasp to digest some 514-foot tale-of-the-tape estimate.

That might be an OK way to go in the prelims. But it sucks all the intrigue out of the final.

So here's a better idea:

Emulate the motif of the slam-dunk contest. Toss a little back-and-forth, mano-a-mano, you-do-your-thing-now-I'll-do-my thing competition into this mix.

Why give these guys all their swings in one burst? Let that second hitter answer before the score gets out of hand. How complicated is that? Just break the final into three "rounds" of three outs each. That'll do the trick.

Hitter No. 1 gets to bop all the homers he can hit before he makes his first three outs. Then it's Hitter No. 2's turn. Then they alternate, just like in a real game, until they've used up all nine outs. And if everything goes right, the finals might build to an actual crescendo as opposed to an excuse to sprint for the parking lot.

Everybody we've run this idea by has liked it. So if the proper HR Derby authorities feel the urge to steal it in time for use Monday night, we'll even drop our usual consulting fee.

2. Pack the field with stars

The issue: As cool and star-studded as the Derby normally is, many of the best sluggers still dodge it.

The solution: Don't take no for an answer (or at least make it worth their while).

The script for this year's Derby seemed so obvious. You have the Derby in San Francisco. You have a star from San Francisco (perhaps you've heard of him) about to break the most momentous record in sports. So you don't exactly need to be a descendant of Willie Mays to know this Derby and that star were meant for each other.

And we don't care how you feel about Barry Bonds, either. This is his park. That's his kayak fleet out there. These are his people. This is awesome baseball theater just waiting to happen.

Except it won't, of course.

The Man This Derby Was Built For blew it off with a simple: "Nope." With a dismissive, too-old-for-this-stuff excuse. With a lame, "It's-too-long  too-much-sitting-around" song and dance everybody knows is just a cover for: "I've got a party with Jay-Z I've got to get to, dudes."

America should be able to get the Home Run Derby field it deserves. And we see all kinds of ways to accomplish that, too.

First suggestion: If we can let fans vote for the All-Star starters, why not let them vote for the Derby field, too -- with this proviso: If you're elected, you must compete.

Second suggestion: Expand the Derby field to non-All-Stars. If America wants to see Adam Dunn or Gary Sheffield or Jimmy Rollins or Josh Hamilton, why the heck not? Give the people what they want. Ryan Howard was invited to defend his Derby title this year, and he's not on the All-Star team. So the precedent is already out there.

Third suggestion: One longtime baseball man we surveyed says, "Throw some money at these guys. Give them 25 grand, and they'll all do it. And have a cash prize if you win. Sweeten the pot. Have a sponsor. It's not that hard." And he's right. It's not.

Fourth suggestion: Just as there's money in it for these hitters if they say yes, there ought to be fines if they say no. And if you're not in traction, in surgery or on the disabled list, you'd better supply a notarized letter from your orthopedist.

Fifth suggestion: Barry's right about one thing. Shorten it. Which reminds us that it's time to move ahead to Suggestion Numero

You know the Home Run Derby is way too long when Bud Selig's wife thinks it's way too long. Well, she does. The commish said a couple of years ago that ever-patient Sue Selig did in fact turn to him at one point in the Derby and ask the following question: "Buddy, how long are we going to sit here?"

Heh-heh. Mrs. Selig apparently was under the impression that the commissioner had some power over stuff like this. And perhaps he does. But if so, he hasn't exerted it because the only major negative about the Derby is still its unwieldy length.

And Sue Selig isn't the only one who thinks so.

"They need to make some changes in it if they want [the big] guys to get back in it," Derby alumnus Chipper Jones says. "They need to shorten it. I think it's getting to the point where it's monotonous."

Well, we don't agree that it's monotonous. But it does need some streamlining.

Any of those proposals above would help. But if it were up to us, we'd try to attack that extraneous dead time, by which we mean: any aspect of the Derby that doesn't involve baseballs whooshing out of the park, if not the entire area code.

One way, suggests 2006 finalist David Wright, would be a rule that says: "You can only take so many pitches. That way, you can't have guys up there waiting all night for the perfect pitch."

We recently found ourselves watching the stupendous, just-released DVD, "Home Run Derby, Volume One" -- consisting of real episodes of the original "Home Run Derby," the 1959 TV classic starring eloquently understated Mark Scott. As we were watching. we were stunned to hear Scott instruct contestants Mickey Mantle and Willie Mays, "Now you don't have to swing. But if it's a strike, you'd better swing."

Why? Because they had umpires back there calling those strikes. And hey, who wouldn't want to see that idea added to the modern Derbies? Imagine Bonds getting eliminated because plate ump Joe West rang him up to end Round 2. What fun.

But we also got another idea from watching that DVD. Rather than kill time after each round by parading each hitter over to the official ESPN interview reporter, how about adapting the old Mark Scott trick: Send the last hitter over to the on-field booth to chat with the crew while the next hitter is taking his hacks. Much more efficient. And if ESPN wants to adapt that idea Monday, we'll waive our usual production fee for that one, too.

The issue: If people like Chipper Jones really do think the Derby has gotten monotonous, we're guessing he isn't the only one.

To be honest, we're open to suggestions on this. So feel free to post them in the "Comments" section at the end of this column.

The most innovative ideas we've heard came from Wright, fresh off his own first Derby experience. So here are the three he tossed out there:

Oh, and not to mention, there might be a home run some day that clanks off the orbiting space station.

The issue: Folks are getting skeptical that those Derby distance estimates bear any relationship to reality.

The solution: Hold the Derby in a site where no seats, scoreboards, "Hit It Here" signs or corporate sponsors from Omaha can possibly get in the way.

The man responsible for this brainstorm is one of baseball's most creative thinkers -- Dodgers coach/witticist Rich Donnelly, a man who has served up some of the longest Home Run Derby homers ever hit through the years.

Ah, but howwww long were they? Who the heck really knows? Some math genius might have estimated them at, like, 537 feet. But how does anyone know for sure?

"Let me ask you something," Donnelly says. "In the next Olympics, you think anybody is going to say: 'Let's have the shot put and throw it into the bleachers?' Or: 'Let's throw that javelin into the upper deck and estimate it would have gone 72 feet?' Or: 'Let's all broad-jump into the bleachers, and say, 'Well, he would have gone five extra feet if he hadn't landed on Mrs. McGillicuddy in the second row?'"

"Come on. They'd never do that. But that's how silly this is."

So all Donnelly asks is this: Move the Derby to a place where we'll know exactly how far the home runs travel -- to the mysterious Bonneville Salt Flats.

We're not sure what goes on at those salt flats when somebody isn't trying to test-drive a race car at about 312 miles an hour. But it appears to be a locale with lots and lots of open space. And that's just the kind of place Donnelly is looking for.

"I want to see a Home Run Derby with no outfield bleachers, so we don't have to estimate," Donnelly says. "You know those guys from the Olympics who go out there in their white lab coats, with their little hats, and measure the shot put? I want to have them run out and go, 'Sammy Sosa, 543 feet.' Then you'd know. You wouldn't need one of those computer nerds in the press box figuring out where it would have hit. You just measure where it lands. And after that, you could measure how far it rolls."

We should point out, in fairness, that this year's Derby is being held in a park next to a body of water. So this is one year when we will see some home runs that don't clatter off a bleacher occupant.

"But what's that mean?" Donnelly retorts. "You've got to put on a life preserver to measure it? Come on. That's no good."

Yeah, well, it's not all bad, either. We figure the scenery ought to be better than the salt flats. And the climate ought to be way better. And the food ought to be an upgrade, too, although it might not be as easy to find a salt shaker.

Now, is the sentiment behind this proposal solid? Absolutely. We're all for it. Somehow, though, we have a feeling we know the one obstacle that will keep this idea from becoming the people's choice:

That 700-mile commute to the nearest All-Star party just isn't going to work.

Jayson Stark is a senior writer for ESPN.com. His new book, "The Stark Truth: The Most Overrated and Underrated Players in Baseball History," has been published by Triumph Books and is now available in bookstores. Click here to order a copy.