SAN FRANCISCO -- It was just one flight of the baseball. Just one swoosh of Ichiro Suzuki's magic bat. Just one laser beam streaking off toward the place where batted balls live on forever.

But when everything else fades from one more All-Star Game victory for the American League -- in what is beginning to feel like a never-ending series of American League victories -- this was the moment that all the Wite-Out in California won't be able to erase.

This was the tale of the amazing Ichiro, gliding around the bases on a journey into All-Star history.

This was the tale of a suddenly defenseless outfielder by the name of Junior Griffey, watching a baseball that was determined to pinball around the funkiest right field in America until the man who hit it had orbited the bases.

This was the tale of the first inside-the-park home run ever hit in an All-Star Game -- a round-tripper that would become the defining moment Tuesday night in a 5-4 game that was won by the team that always wins the All-Star Game.

Think of all the sprint champs who have played in this game. How could Rickey Henderson never have hit an inside-the-parker in an All-Star Game? Or Maury Wills? Or Lou Brock?

How could it be possible that none of those parks had ever manufactured the one classically goofy bounce it takes to produce a moment like the one we witnessed Tuesday night at AT&T Park?

We have no idea how events can conspire like that to keep something like this from happening for more than 70 years -- and then, in one fluky collision of events, it happens right before your eyes. 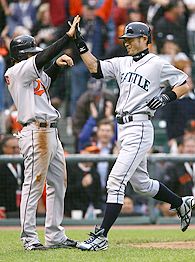 But we're grateful now, because the sight of this man legging out this inside-the-parker was one we'll never forget.

"You know, in batting practice tonight, I saw some balls take some weird hops off that fence out there," said Ichiro's fellow AL center fielder, Torii Hunter. "And I said to myself, 'If anyone ever hits one off one of those corners out there, somebody's going to get an inside-the-parker.' Well, here came Ichiro."

Yeah, here came Ichiro, all right. He wriggled into place in the batter's box in the fifth inning Tuesday night. He already had two hits on this night -- one fewer than he'd gotten in all his other All-Star at-bats (all 15 of them) combined.

But this hit -- the third hit -- would be the one that would keep on traveling for the rest of his career.

He smoked a Chris Young fastball deep into the ionized night, way way way back in distant right-center field. In a lot of parks on either side of the Pacific, it was a ball that would have come down in somebody's popcorn cup. But not this one.

Instead, it splattered off one of the All-Star Game banners stretched out across the wall in the deepest part of the yard -- a banner sneakily hiding one of the trickiest angles in the entire ballpark.

So Griffey went motoring off in the direction he thought it would carom -- only to have the baseball fake left, and go right, and hop on off into No Man's Land. OK, make that Inside The Park Land.

Imagine what was going through the heads of these two men -- two of the most gifted and charismatic players who have ever played baseball -- in that moment.

We bet you'll correctly guess exactly what one of them was thinking, anyway.

Asked what went through his mind, Griffey had to laugh.

He laughed one more time.

It didn't matter. [Ichiro] flies, man. Even a perfect throw wouldn't have gotten him.

Meanwhile, the man in the midst of circumnavigating those bases had a slightly different reaction.

"I thought it was going to go over the fence," Ichiro would say afterward. "And when it didn't, I was really bummed."

But the sight of him legging out this inside-the-parker was one that filled many of his fellow All-Stars with awe.

"One thing I noticed," said Josh Beckett, the man who would become the winning pitcher, thanks to this homer, "is, he wasn't as tired after he scored as most people are when they hit a triple."

"I think it took him like maybe 5.2 seconds (to make it around the bases)," Hunter said. "All I know is, I looked up, I saw the ball roll and he was at home plate already."