SAN FRANCISCO -- Many times closers will tell you that when they enter a game and it's not a save situation, it's hard for them to mimic the adrenaline and feel for the way they normally pitch. In Tuesday night's All-Star Game -- in which the American League won 5-4 -- the closers, for the most part, didn't have to worry about the adrenaline, though the results were unfavorable for some of the game's top relievers.

"I made one bad pitch -- it was one mistake," said Milwaukee closer Francisco Cordero, who gave up a solo home run to Carl Crawford in the sixth inning. "Their hitters are good for a reason. But my mentality always stays the same. It's just part of the game -- I made a mistake." 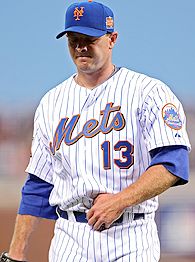 In the case of Cordero, he had given up just one homer all year, and the one given up to Crawford was the first to a left-handed hitter. An uncharacteristic stumble also afflicted J.J. Putz, the Mariners' closer, who entered the game in the bottom of the ninth inning and got two quick outs. He then, however, allowed an infield single to Dmitri Young, a two-run homer to Alfonso Soriano and a walk to J.J. Hardy. That made it three straight batters to reach base, something Putz hadn't allowed all year for Seattle.

Mets closer Billy Wagner also struggled, when he gave up a two-run shot to Indians catcher Victor Martinez in the top of the eighth. But Wagner said that each situation is different for a closer. He said sometimes in an All-Star Game a pitcher is so pumped up and the batters are so aggressive, it's a bad combination.

"What happens with closers in that situation is that sometimes you get a little too much adrenaline," he said. "And you overthrow and the same pitches suffer on location. For me tonight, I actually made the pitch I want to make and the guy hits a home run. For other guys, sometimes the emotions get in the way."

Red Sox closer Jonathan Papelbon thinks the combination of facing great hitters and unusual innings when closers are asked to pitch adds to the All-Star challenge.

"I think it's a little bit of both," said Papelbon, who pitched a scoreless eighth. "It's a situation where if you're not used to coming in that inning it's hard, but then you're facing the best hitters in the game and there's no easy outs. It's tough."

In total, seven closers were used in the game, and they gave up more than half (five) of the runs scored. Even Angels closer Francisco Rodriguez, who relieved Putz in the ninth, couldn't catch a break when he walked the Cubs' Derrek Lee and then the Diamondbacks' Orlando Hudson to load the bases. But unlike a few of his counterparts, Rodriguez was able to finish what he and all of the closers usually do so well.

"It was a fastball in," Rodriguez said of his final pitch that the Phillies' Aaron Rowand hit for a fly ball to right field. "I knew it [was an out] right away."

With the win, Rodriguez helped the AL gain homefield advantage in the World Series. And if the Angels advance to the Series, there's a good chance he'll be back on the mound, at home, with a different adrenaline pumping when trying to save a championship.

Amy K. Nelson is a staff writer for ESPN.com.