The Mitchell Report, the findings of former senator George Mitchell's 18-month long investigation of the steroids era in baseball, is an anticipated, as-of-yet unfinished document of mounting importance. There is, in some baseball quarters, the expectation that Mitchell's final analysis should resemble the 2005 report filed by the House Government Reform Committee on Rafael Palmeiro, which was investigative in nature. Those findings were damning in tone, not only regarding Palmeiro's dishonesty but also in their indictment of the widespread, questionable practices of his former teams and teammates.

One section of the House report details Baltimore shortstop Miguel Tejada providing vials of vitamin B-12 shots to Palmeiro and other teammates, while taking roughly 75 shots himself over a two-year period. B-12 is not a steroid, but it is illegal without a prescription and most teams discourage its use. 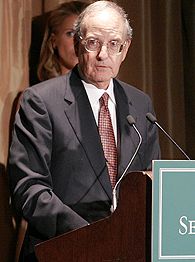 In another portion of the report, the committee dissects Palmeiro's polygraph test, which he used in his defense. During the lie detector test, he was never asked directly if he had ever used anabolic steroids.

Another section documents how the medical staff of the Texas Rangers provided B-12 shots both to Palmeiro and to his wife, Lynn, when he played there.

If Mitchell plans to provide an investigative report filled with the type of meticulous and sober detail found in the House report on Palmeiro, and if the public is unusually fortunate, the document will indict more than just the players it has connected to performance-enhancing drugs. It also will indict the front offices of the 30 major league teams. But Mitchell is also an equity shareholder of the Boston Red Sox, and the conflict of interest -- a partial owner investigating the most explosive issue in the history of the sport -- in many ways undermines even his considerable credibility.

Others expect Mitchell -- whose report reportedly has already cost baseball $15 million and is expected to be released close to Thanksgiving -- to produce a baseball version of the report by the Kerner Commission, the committee commissioned by President Lyndon Johnson to explore the root causes of the racial disturbances of the 1960s. That 1968 report issued the powerful and famous warning, "Our nation is moving toward two societies: one Black, one White -- separate and unequal." But it did little in the way of producing genuine solutions.

Like Kerner, Mitchell likely will offer much regarding the culture of steroids over the past decade and a half, discussing the root causes that made anabolic substances an attractive option for players, where mistakes were made and what vigilance the sport must maintain in the future. The report will be, in this view, a stern but nonpunitive judgment that will serve as baseball's official admission that for the large majority of commissioner Bud Selig's tenure, the sport lost control of itself, sacrificing what moral authority it once commanded.

However, what Mitchell's report must do most authoritatively -- and two seismic events last week confirm this necessity -- is conclude convincingly that the events of the 13 years following the 1994 players strike (aka the steroids era) have been far more damaging to Major League Baseball than its nearly century-old gold standard, the 1919 Black Sox scandal, Selig's alternating silence and indignation notwithstanding.

Mitchell must do what baseball and its fans have been reluctant to do. For the good of the sport, he must pull on the ball of yarn and be unafraid to watch it unravel. If he is afraid to do that and instead produces a document that concludes that mistakes were made and that baseball must look to the future -- essentially an official version of Mark McGwire's 2005 House testimony -- then Mitchell's credibility will lie dead, right next to McGwire's.

Last week, the public and press reaction to the revelations that two players, Rick Ankiel of the Cardinals and Toronto's Troy Glaus, had in 2004 received shipments of human growth hormone and anabolic steroids, respectively, was predictably naive and sentimental, focusing on another "dark cloud" for baseball. Ankiel -- who lost himself as a pitcher, appeared to lose his baseball livelihood and then made a remarkable return as an outfielder -- was today's bittersweet reminder that in the steroids era, there are no happy endings in baseball. The weeping for Ankiel, and the suggestion that his fall represents some new loss of innocence, is as nauseating as it is misguided. Even at this late date in the game, despite so much evidence to the contrary -- did Wally Joyner, Palmeiro or Matt Lawton look like users? -- people still seem to want to believe the fiction that they know the private men who wear the public uniforms. 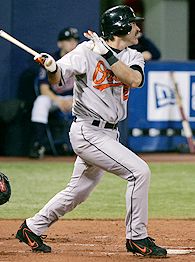 The focus on the Ankiel fairy tale by the popular press, along with the public's consistent ambivalence about drugs, again places the discussion entirely on the players and the record books, which is a libertarian debate about cheating. Mitchell, the press and the public need to take a better look at what steroids and growth hormone are doing to the current standings, the historical record that lives beyond individual numbers.

It isn't clear if Ankiel actually used the growth hormone he allegedly received in 2004, but the news last Friday raised questions about his career since then, such as whether he is using growth hormone now, either with or without a doctor's care. The day before the Ankiel story broke, he hit two home runs in a 16-4 win against the Pirates. In the National League Central, the Cubs, Cardinals and Brewers are separated by three games.

Ankiel's performance against Pittsburgh should provide bitter memories -- and underscore the importance of performance enhancers on the game's equilibrium, a discussion baseball has generally refused but Mitchell cannot avoid -- for the Boston Red Sox. Two years ago, while they were defending their 2004 World Series title, the Sox were manhandled by Palmeiro during a key series against the Orioles before the 2005 All-Star break. Baltimore won three of four games from the Red Sox and Palmeiro was the star, going 5-for-10 with three home runs and nine RBIs. Two days after the Boston series, Palmeiro notched his 3,000th hit in Seattle. It would serve to be his last great moment as a major league player. Two weeks later, he was suspended for failing a steroid test.

Palmeiro's effect on the pennant race would not be lost on the Red Sox. They finished the season with a record identical to the Yankees, but the division title went to New York, which won the head-to-head series. Management knew better than to argue too angrily, for to keep pulling on that string would be to say that the season's results were illegitimate. It would be to acknowledge the true cost of baseball's runaway steroid culture.

And thus the unraveling begins. Mitchell needs to address the sentiment of the Red Sox front office at the time: that Palmeiro -- who was being investigated by baseball for his positive test while he was whipping up on Boston -- affected something far more valuable and important than his own home run total. A dirty player helped cost the Red Sox a division title.

Ankiel might have much to answer for in a similar fashion. His situation could affect the pennant race much like Guillermo Mota's did last season. Mota, as a reliever for Cleveland, was nothing short of a disaster for much of last season. Although he didn't give up an earned run during the first three weeks of the season, his ERA ballooned from 3.72 on April 25 to 5.89 on May 23 to 6.99 by June 25. He was traded to the Mets a month later with an ERA of 6.21, but with New York, he suddenly became a different pitcher, going 3-0 with a 1.00 ERA for the Mets with fewer hits and more strikeouts than innings pitched.

Mota pitched two key innings in the Mets' National League Division Series clincher against the Dodgers. Following New York's seven-game loss to St. Louis in the NLCS, Mota was hit with a 50-game suspension for failing a steroid test.

Before he came to the Mets, Mota was a mediocre pitcher with mediocre numbers. And now, following his suspension, he has returned to his old pre-steroid level, drowning under a 5.82 ERA. 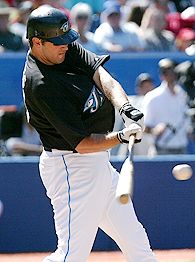 Glaus, meanwhile, asked reporters to respect his privacy and has not otherwise commented on the Sports Illustrated report last week that he received steroids through the mail in 2003 and 2004. A year earlier, against San Francisco in the 2002 World Series, Glaus changed baseball history by starting a game-tying rally for the Angels in Game 6 with a single and later winning the game with a double against the Giants' closer, Robb Nen. Anaheim won the World Series the next night, and Glaus was named World Series MVP.

Of course, on the other side of the field were Barry Bonds, who reportedly told a grand jury he used steroids but did not know he was taking them, and catcher Benito Santiago, another BALCO client.

In 1920, when news about the World Series fix the previous fall grew more prominent, baseball had an opportunity. The game in the first two decades of the 20th century was marred by gambling and alcohol. The 1919 fix, which was likely not the first time the World Series was tampered with, gave owners a launching point to clean up their sport, to tranquilize the elephant in the room.

But the steroids era isn't like the Black Sox scandal. The owners, because they have been as culpable as the players for the proliferation of drugs in their game, have no moral cudgel regarding steroids, as they did concerning gambling back in 1919. Instead, today's owners and management are swallowed up by each devastating revelation. Ankiel's manager, Tony La Russa, for example, is a symbol of such denial. Few in baseball look worse than La Russa today, whose ferocious denials of the steroids era have grown silent. La Russa, who has managed Jose and Ozzie Canseco, McGwire, Jason Giambi and now Ankiel, is the biggest ostrich in baseball.

Worse is baseball's slow reaction time to the drug problem. The Black Sox scandal lasted but two years, from exposure to the installation of Kenesaw Mountain Landis as commissioner to banishment of the eight White Sox players -- proof that the sport understood its unique position and its responsibility.

The steroids era is now reaching its 14th year. It has been 10 full seasons since the McGwire-Sosa flash point gave baseball its first opportunity, and 14 years since baseball, under Selig, inserted a short-lived steroid-testing clause into the 1994 strike negotiations (a clear repudiation of the commissioner's position that he knew "nothing" about steroids before 1998). The Selig strategy -- to move slowly and rely on the short memory of the public -- might be appropriate for this modern age of unaccountability, but it is a horrible model for crisis management.

Yet the games go on, each heightening in importance as the pennant races develop.

The Mitchell Report should provide insight on how baseball dealt with and ignored the drug problem in the sport, and whether it is Mitchell's belief that the record book should contain an asterisk. But a more important question for Mitchell is what his report will say about the effects men such as Mota and Palmeiro -- and now, it appears, Glaus and Ankiel -- have had on history. For if the standings don't matter, the game has lost its legitimacy.

What Mitchell says about these pennant races affected by the clean and, more obviously than ever, the dirty, will say just as much about him.

Howard Bryant is a senior writer for ESPN.com and ESPN the Magazine. He is the author of "Shut Out: A Story of Race and Baseball in Boston" and "Juicing the Game: Drugs, Power and the Fight for the Soul of Major League Baseball." He can be reached at Howard.Bryant@espn3.com.