Editor's Note: Jim Caple covered the Twins as a beat writer for the St. Paul Pioneer Press from 1989-93 and then as the national baseball writer from 1994-99.

I don't know where the funeral is going to be because there isn't a church big enough to hold everyone. 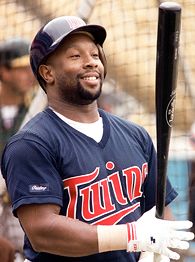 I have never covered any athlete who was more universally liked and admired than Kirby Puckett. What Michael Jordan was to basketball and Chicago, Puck was to baseball and Minnesota. Indeed, the Twins used to wear T-shirts that read "I wanna be like Puck." (Do you think there are "I wanna be like Barry" T-shirts in San Francisco's clubhouse?) Puck's locker was the one every player surrounded at the All-Star Game. And why not? A clubhouse with Puck in it was always a happier place than one without him.

Puck was always among the first to arrive at the stadium, and when he wasn't in the cage taking batting practice (and he took hours of BP), you could find him chattering away in the clubhouse or in the dugout, busting on his teammates, making everyone smile, making everyone laugh, making everyone -- players, coaches, reporters -- feel better. Not many players make a real difference to a team beyond what they do on the field. Puck did, though. He personally took Shane Mack under his wing and transformed him from a nervous wreck into a confident, solid player simply with his upbeat personality. He was like that with everyone. His infectious, positive presence helped teammates play to their potential.

And the fans? Oh my, did he make them feel good. Puck was so popular the Twins used to separate their fan mail into two piles: One for Puck and one for everyone else. There would be 60 to 70 a day in the Puck pile, more than 11,000 over the course of a season (not counting spring training). If the writer included a stamped self-addressed envelope with the autograph request, Puck signed. Baseball cards not autographed by Puck are probably worth more than those signed by him.

I remember talking to Puck one day while he autographed 10 boxes of baseballs. I asked him whether he ever tired of it.

"Look," he said while signing a ball. "See how little time it takes to autograph a ball? If it takes me 30 seconds to make someone happy, why not do it?"

A clubhouse kid handed him another ball while we talked. "Puck? Could you sign this?" the attendant asked. "It's for a friend of mine who has a little boy at the Mayo Clinic. He has leukemia."

Puck signed that baseball and then finished up the rest of the balls. And then someone handed him a bat and he signed that one, too. "To Ken Griffey Jr. -- all my best, Kirby Puckett."

A millionaire player, a child with leukemia, a reporter -- he treated everyone with the same respect and good humor.

Unfortunately, a man who was always so happy did not end his life that way. Puck's stature fell considerably in recent years when he was charged with sexual assault for allegedly groping a woman in a restaurant bathroom. He wound up on the cover of Sports Illustrated along with a story filled with ugly tales about extramarital affairs. He was cleared of all charges from the alleged assault, but the damage to his image was done.

I don't think he ever recovered from that fall from grace -- or from his replacement in popularity by a new generation of successful Twins. For nearly two decades, he had been the face of the Twins. The team had so many nights to honor him after his retirement that we joked they would retire his pants along with his jersey. And then almost overnight he found himself permanently on the bench. The glaucoma was one thing, but that was too much, I think. Puck stopped working for the Twins and started drinking heavily. Never a thin man, he grew fatter and fatter. Someone who had always been so happy and spread so much joy became increasingly bitter. Friends openly worried about him.

That's not how I want to think about Puck, however. I prefer to remember the player who made so many of us so happy. The Twins used to show a highlight video of Puck with John Fogerty's "Centerfield" playing in the background. And that's how I'll always remember him -- reaching way over the fence to rob home runs, slamming hits into the gap, running around the bases and smiling, always smiling. Just happy to be alive and playing baseball.

"Well, beat the drum, and hold the phone -- the sun came out today!
We're born again, there's new grass on the field.
A-roundin' third and headed for home, it's a brown-eyed handsome man.
Anyone can understand the way I feel."