OAKLAND, Calif. -- Well, at least "Bonds on Bonds" should be a little more interesting this week.

After a wait so long it's hard to believe it didn't involve government workers at the DMV, Barry Bonds finally matched Babe Ruth's career home run total Saturday with a second-inning line drive off Brad Halsey into the right-field bleachers. But what are we to make of this? After all, Ruth may still be a cultural icon half a century after his death, but his 714 total hasn't been the record since 1974, when moon rocks and pantsuits were all the rage and Barry's hat size was 4¾.

It's hard to get very excited because Bonds is still 41 home runs behind Hank Aaron's 755 and the real record, and unless he picks up his recent pace, he's never going to get there. So what happened Saturday isn't exactly history unless you're one of those stat freaks who cares about left-handed records.

It also is hard to get excited because it took so damn long for Bonds to catch Babe. He climbed within belching range of Ruth when he hit his 700th career home run in September 2004. It took him 20 months to hit those next 14, during which time baseball suspended its first major leaguer for steroid use, BALCO defendants pleaded guilty, and "Game of Shadows" was published. It took Ruth four innings to go from 713 home runs to 714. It took Bonds 13 days and 40 plate appearances to go from 713 to 714. That sapped a lot of the interest. Nobody likes waiting around.

Then there's the public's perception of the man. He's loved in San Francisco and reviled just about everywhere else. (Here's an example of Barry's wonderful public relations: Bonds brought his children to the postgame press conference but declined a reporter's polite request to ask his son about what it was like to be the bat boy and watch his father circle the bases. "I don't think my son is on the stage here," Barry said. Well, great. Then why the hell did you bring him into the room?)

The fans certainly weren't consistent in their feelings Saturday. A mixed crowd of Athletics and Giants fans greeted Bonds with heavy jeers when he stepped to the plate in the second inning, gave him a resounding standing ovation when he homered, went right back to booing him when he batted again and then booed even louder when the Athletics intentionally walked him in the eighth and 10th innings.

So if you're scoring at home, they hate the guy but they love seeing him homer. And what really ticks them off more than anything is when someone interferes with those chances of a home run. 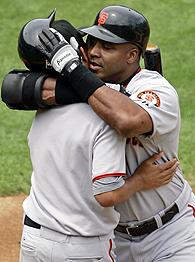 In the end, this isn't about matching an old number that really has no more meaning than 4,189 (Ty Cobb's hit total), 3,509 (Walter Johnson's strikeout total) or 938 (Lou Brock's stolen base total). It's about matching an old name: Babe Ruth, still the most famous -- and probably best -- player in baseball history.

"When you're in Little League or in the minor leagues and you're not throwing strikes or you're pitching a guy like he's a great hitter," Giants starter Jason Schmidt said, "the coach comes out and says, 'He's not Babe Ruth. C'mon, throw strikes.' Ruth set the standard. And now we're sitting among a guy who's done the same thing.

At an All-Star Game press conference three years ago, Bonds said that he wasn't interested in catching Aaron as much as in passing Ruth. "I wiped him out. In the baseball world, everything is Babe Ruth right?" he said. "I got his slugging percentage and I'll take his home runs and that's it, don't talk about him no more."

He was far humbler regarding Ruth on Saturday, denying that he ever said the previous statement even when it was read back to him.

"This is a great accomplishment because of Babe Ruth and what he brought to the game of baseball and his legacy," Bonds said. "I think this and a World Series ring would be the ultimate. You can't say enough of what he did and it's an honor to be in the same class."

Bonds matched Ruth on Saturday. He'll try to pass him Sunday and then begin the long slog toward Aaron. What number he finally finishes with on the official home run list, however, will be less important than where his name finishes in public lore.