MESA, Ariz. -- In the low minors, where you practically have to pay to play baseball, aspiring big-leaguers derive sustenance from the four basic food groups: In-N-Out Burger, Wendy's, McDonald's and Burger King.

From the moment Juan Pierre broke into the Colorado Rockies' system as a 14th-round draft pick out of the University of South Alabama, he established his own culinary tradition. Pierre would buy a jumbo pack of wieners and a gallon of fruit punch and make it last for a week. Every week. With the notable exception of teammate Chone Figgins, Oscar Mayer was Pierre's closest friend.

Before money and headlines and simple human jealousy clutter a man's mind and cloud his judgment, nothing brings athletes closer than shared struggles and cheap eats. Ask Pierre for his most vivid memory of life with Portland in the Class A Northwest League, and he recalls hanging out with Chone Figgins, taking the bus to the ballpark with Chone Figgins and -- yes -- eating frankfurters with Chone Figgins. 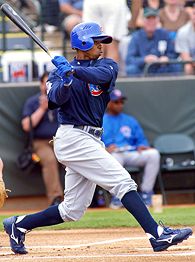 The two young speedsters would watch "SportsCenter" together and dream out loud about one day batting in the same lineup in Colorado. Then time and the business of baseball altered the story line.

The Rockies sent Figgins to the Angels in an ill-conceived trade for outfielder Kimera Bartee in 2001 and shipped Pierre to Florida as part of the big Mike Hampton deal in 2002. The Marlins, determined to rid themselves of non-minimum wagers, subsequently traded Pierre to the Chicago Cubs in December.

Alternative career paths notwithstanding, the former teammates remain as close as brothers. Figgins lives in the Tampa area and Pierre resides in Miami, and they visit each other often for workouts in the winter. They also speak regularly by phone during the season and monitor each other's progress via the magic of the MLB Extra Innings package.

Figgins has the luxury of watching Pierre play on the East Coast before the Angels take the field, and Pierre habitually flips his TV remote to Figgins' game once he's showered, dressed and gone home for the night.

Spring training typically tears them asunder, but that logistical hurdle was resolved last winter. Now that Pierre is playing for the Cubs and training in Arizona, it's a quick ride from Mesa to where Figgins trains in Tempe. That means lots of Cactus League dinners together to review the day's events and talk ball.

There was a time when Pierre would instinctively pick up the tab. But now that Figgins has signed a three-year, $10.5 million extension with the Angels, he'll be called upon to assume a greater share of the burden.

It's fair to say that dozens of former managers, coaches and teammates are gratified to see the two undersized, hungry-hearted overachievers do so well. Colorado scout Pat Daugherty, who drafted Pierre and Figgins in his former role as the team's scouting director, is at the front of the line.

Daugherty's pride is tempered only by a sense of regret that they blossomed somewhere else. Figgins won a World Series ring with the Angels in 2002, and Pierre pocketed one with the Marlins in 2003.

"They're special kids," Daugherty said. "They've busted their rear ends to get where they are, and I'm really glad to see them reap the benefits."

If Woody Allen was correct and 80 percent of success is showing up, Pierre is about 120 percent of the way there. Marquis Grissom, in Cubs camp for a late-career fling this spring, recalls coming into Colorado as a visiting player at 9 a.m. each day for medical treatment before day games. He still couldn't arrive earlier than Pierre, the quintessential breakfast clubber.

Shortly after the Cubs' camp began this spring, general manager Jim Hendry took his Little League-aged son, John, to one of the back fields for some hitting. The Cubs' clubhouse had emptied by 1:30, yet there was Pierre at 2:15, still baking in the Arizona sun and working on fundamentals.

"It's a great lesson from a father when you can point to Juan Pierre and say, 'See, John, that's what it takes,'" Hendry says. 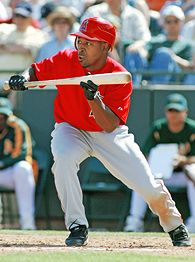 Pierre appeared in all 162 games for the Marlins last season despite a calf injury that dogged him in spring training and lingered through much of the summer. His batting average dropped from .326 to .276 and his on-base percentage declined from .374 to .326. Still, he ranked eighth in the National League with 181 hits and stole 57 bases, five short of Figgins' major-league high 62.

Whatever Pierre does in the leadoff spot should be an upgrade in Chicago. Last year, with Jerry Hairston Jr., Corey Patterson, Neifi Perez and Matt Lawton logging the bulk of the at-bats in the No. 1 spot, Chicago's leadoff men ranked 15th in the league with a .658 OPS.

Figgins will fill a similar catalyst's role in Anaheim, even if it might be difficult locating him from one day to the next. Last year he played second base, shortstop, third base and all three outfield positions. The Angels initially penciled him in at center field this year before trading Steve Finley to the Giants and moving Darin Erstad back to center. Now Figgins is likely to begin the season at third base, although a Cactus League push by power hitter Dallas McPherson could force manager Mike Scioscia to improvise.

When Figgins was just a pup in Portland, Ore., Daugherty thought he had the potential to make the majors as a utility player because he had a few distinct advantages. A team might overlook the fact that you're 5-foot-9 and 155 pounds when you have speed, a strong arm and the ability to switch-hit and play shortstop.

But it was Pierre, as much as any coach, who taught Figgins to maximize his skills on the ball field.

As they continue to carve out professional identities at age 28, the early results are promising. The Web site www.baseball-reference.com has a neat feature comparing players' career statistics at the same age. Figgins' closest comparable player in baseball history is Bip Roberts. Pierre's is Willie Wilson.

So where do they go from here? Pierre might take advantage of the thick infield grass at Wrigley Field and lay down a few more bunts this season. Figgins, firmly entrenched as the Angels' leadoff man, might bunt more often as well in an effort to increase his total of 113 runs scored from a year ago.

Maybe they can talk bunting during those dining excursions in the Valley of the Sun. They've earned the right to eat hearty.