Back home in Phoenix, Gonzalez gets a lot more than two bags worth of love for liners into the gap. Each of his doubles is cause for celebration on the outfield scoreboard. The fans respond with cheers, and he acknowledges the praise with a wave and the wistful look of a man who knows he won't be enjoying this kind of adulation much longer.

This year Gonzalez has already picked off Babe Ruth, Rickey Henderson, Willie Mays and Ted Williams on the doubles list. Now Al Oliver, Lou Gehrig and Al Simmons await. That's serious company for a guy who was once traded for Karim Garcia, straight up.

"As a young kid, you get here and your first goal is to try and stay for a year or two," Gonzalez said. "Then you look up 16 years later and you're passing all these milestones. It's pretty awesome."

Twilight views aren't quite as breathtaking, even in the desert. Gonzalez is 38 years old, his home run power has waned and he has a $10 million club option for 2007. In short, he's too old and expensive to play in the team sandbox any more.

In Arizona, it's all about transition. The Triple-A team in Tucson is 66-36 and loaded with prospects, and the former scouting director, Mike Rizzo, just parlayed his keen eye for talent into a job in the Washington Nationals' front office.

Most baseball people think the Diamondbacks are built to be dangerous in 2007 and downright formidable in 2008, when infielders Stephen Drew and Alberto Callaspo, outfielders Carlos Quentin, Chris Young and Scott Hairston, first baseman Conor Jackson, catcher Miguel Montero and pitchers Enrique Gonzalez, Tony Pena, Dustin Nippert and Micah Owings could all be part of the landscape.

But a funny thing happened on the way to incremental progress. The Diamondbacks are only 2½ games out of first place in the National League West, and they've already tapped the pipeline. Drew is hitting .302 in 11 games since taking over for the injured Craig Counsell at shortstop, and Quentin homered three times in his first six games after Tony Clark went on the disabled list.

The line between wait-a-minute and right-now has blurred considerably.

"The most difficult thing I have to do is try and get playing time for everybody and not bruise egos," manager Bob Melvin said. "We have some younger guys who have to play now if we are going to be better in 2007. I have to balance that with the fact that we're right there in the division, and the veteran guys are the ones who run you down that road."

Are the Diamondbacks buying or selling, contending or pretending, coming or going? As the July 31 non-waiver trade deadline approaches, it'll be a surprise if general manager Josh Byrnes makes any moves of consequence.

The Diamondbacks plan to hang onto starter Miguel Batista, even though the Red Sox, Yankees and several other contenders would love to have him. And even if Arizona could find a taker for Gonzalez or Shawn Green, both outfielders have no-trade clauses.

If someone blows away Byrnes for one of his right-handed power relievers, he might listen. Other than that, he's a bystander.

"We're not going to sacrifice our future to recklessly try and shore things up for the next two months," Byrnes said.

This was a weird season even before the surprise collision of Diamondbacks future and Diamondbacks past. Arizona was rolling along at 34-22 in early June when the news broke that reliever Jason Grimsley's home had been searched by federal agents investigating illegal use of performance-enhancing drugs in baseball.

The D-Backs quickly unraveled, losing 20 of 23, and the Grimsley affair was cited as the root cause. It was speculated that Arizona players were either upset about the fate of their teammate, or nervous about what might be revealed from Grimsley's chatty interlude with the feds.

More likely, Arizona's problems stemmed from another source. When managing partner Ken Kendrick publicly alluded to "whispers" about Gonzalez and performance enhancers, he struck a nerve in the Arizona clubhouse. Gonzalez isn't just the guy whose bloop single off Mariano Rivera brought the Diamondbacks a title in 2001. He is beloved by teammates, fans, coaches, bat boys, beat reporters and local radio folks.

So everyone shared in Gonzalez's dismay when he called a press conference to defend his reputation. You'd like to think a few misguided comments from management don't justify an entire team going in the tank. But clubhouse dynamics are a strange and often mysterious thing.

"Gonzo is the face of the Arizona Diamondbacks," outfielder Eric Byrnes said. "He's the leader in the clubhouse. He's the guy we look up to. To see him distraught over an issue was difficult for us, because he has so much support inside the clubhouse."

Although the anger has since waned, Gonzalez is enough of a realist to know that he's a short-timer. The Diamondbacks almost certainly will decline to exercise their option, and he'll spend this winter calling his agent for daily updates.

"I want to continue playing," Gonzalez said. "I want to win a championship. I'd love to do it here, but at the same time, I've always stated that I'm not afraid to make a change if I have to."

If this is, indeed, the end, Gonzalez can take comfort in knowing the franchise is in good hands. You can start with Drew. When Arizona selected him out of Florida State with the 15th pick in the 2004 draft, some scouts opined that he was too emotionally detached and lacking in inner "fire" to be an elite player.

Scratch that sentiment. After 180 professional games, J.D.'s little brother is earning raves for his baseball instincts and fundamentally sound game. Arizona broadcaster Mark Grace talks about how "comfortable" Drew looks for a rookie. Bench coach Jay Bell praises the kid for his internal clock and sure-handedness on routine plays. And when Melvin describes Drew as a "slow thinker," he means it as a compliment.

The game can move quickly for a young player in the majors. Drew has that rare ability to process events at his speed and make order out of chaos. 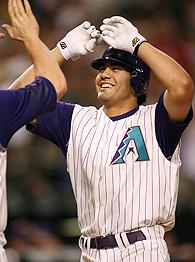 "He has good field awareness," Bell said. "There's a nice pace to his game, and there's never any panic."

Quentin, a former first-round pick out of Stanford, is the tough, determined type. He's a hit-by-pitch magnet who'll take a fastball off an elbow or the ribs and jog to first without giving the opposing pitcher the satisfaction of rubbing the bruise. And Quentin admirers recall how he played an entire year at Stanford with an elbow injury so severe that it ultimately required Tommy John surgery.

Still, Quentin is 23 years old, and you take the good with the bad. Tuesday night in Philly, he slid past second base and benefited from a gift safe call when umpire Larry Young failed to notice that his foot was off the bag.

"I have to get used to the dirt in the major leagues," Quentin said later. "It's faster here."

Two innings after his near-costly misstep, Quentin drove a Ryan Franklin pitch over the fence to give the Diamondbacks a 6-5 victory.

Just off the bus from Tucson, Quentin predicts there is more to come.

"That team down there is no joke," Quentin said. "They've got guys who can hit, guys who can play defense, and they have good pitching. They've got a little bit of everything."

There's nothing like a little talent to bridge the generation gap. If the Diamondbacks can find a way to win -- starting with this season -- the veterans and kids will find a way to coexist.