LOS ANGELES -- David Wells is planning a trip to Africa in November. He will pack his bow and arrow and go on a safari to hunt lions, leopards and water buffalo.

He wants to shoot golf consistently in the 70s, and climb on a surf board and cut a swath through the Pacific Ocean waves as a relaxing breeze blows in his face. 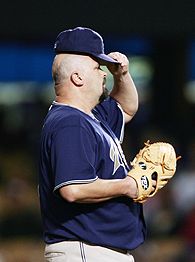 He will spend time this winter at Buckfalls Ranch, the 1,300-acre Michigan spread that he co-owns with Kirk Gibson, and be a guide to experienced whitetail deer hunters. Wells doesn't cater to beginners because, he says, he has no desire to "babysit."

He plans to spend time with his three kids and take his wife to dinner at a decent hour and nurse a glass of wine. He wants to go to San Diego Padres games and sit in the bleachers with a cold one and put a new slant on the fan experience: While the hecklers yell at players, Boomer plans to heckle the hecklers.

A big payout might prompt him to suck it up and play one more year. But his knees are shot, and there's little chance the Padres will offer him more than the "San Diego discount" to return. So the next time Wells puts on a uniform, it will probably be to babysit. If Padres pitching coach Darren Balsley needs a hand with the kids in spring training, he would love to help.

This is the uncomplicated world David Wells envisions after 25 years of professional ball and two decades in the majors. Some athletes, when the end is near, want time to slow down so they can drink in the sensations and file them away for future reference. A little piece inside them aches over the prospect of the competition and camaraderie disappearing from their lives.

"It can't get over quick enough," Wells says. "I want to get in the playoffs, go to the big game, enjoy it and go on with my life."

"Retirement" is a word he refuses to utter, if only because it's too official and too final.

Colorful as ever
In a sport more bereft of free spirits than ever, Wells will leave a void when he quits playing. His most recent start with the Padres was Exhibit A. After giving up 11 hits in an 8-2 loss to Arizona, he vented by flinging his glove into the stands on his way off the field.

Although Wells pitched impressively in his San Diego debut three weeks ago, teammate Geoff Blum jokes that the Padres' 2-1 victory over Cincinnati was tarnished by the sight of old Boomer having to run the 90 feet from home plate to first base on a single.

"I think he was kind of upset about that," Blum says.

This is David Wells, like it or not, huffing and pitching and behaving as if his life were a 24-hour-a-day audition for "Artie Lange's Beer League." Even when injuries limited his contribution this season, Wells made news by ripping commissioner Bud Selig in spring training, standing up for Babe Ruth during Barry Bonds' pursuit of 714 homers, then suggesting to reporters that Phillies outfielder David Dellucci might have a steroid problem. Wells later claimed his remarks were taken out of context.

"I'm not going to put myself out there like that, because it's just going to subject me to going to court or a congressional hearing," Wells says.

"He just pounds the strike zone and forces you to swing the bat," Padres catcher Mike Piazza says. "That's why he pitches great in big games. He's not intimidated at all. He doesn't care who's hitting. He's going to give you quality pitches and execute his plan. He has a certain tenacity out there."

Padres general manager Kevin Towers was no doubt thinking similar thoughts in late August when he acquired Wells from Boston for catcher George Kottaras. Wells has 229 career victories and an 8-8 record with a 3.15 ERA in the postseason, and Towers was intrigued by the thought of Boomer coming home to San Diego and combining with Chris Young and Jake Peavy to give the Padres a formidable rotation down the stretch.

The early results have been mixed. Wells is 0-2 with a 4.43 ERA for the Padres, and he's pitched into the seventh inning only once in four starts. He's been outpitched by fellow baseball geriatric Woody Williams.

Still, redemption is only a start away. Even though Wells was scratched from tonight's start against the Cardinals due to gout in his right foot, the Padres need him to come through as they try to win the National League West or outlast the Dodgers and Phillies in the wild-card race.

When the San Diego players felt the buzz in the air for the Wells-Greg Maddux matchup 10 days ago in L.A., it just confirmed Wells' potential impact.

"It's what makes Boomer Boomer," Peavy says. "He brings an attitude and a persona to a team, and we need that around here."

Pitching connoisseur
Wells' personal baggage obscures much of what makes him successful on the field. Dodgers assistant GM Roy Smith, a former big league pitcher, refers to Wells' "perfect" mechanics, and the other Padres have found they can learn a lot sitting near Wells in the dugout.

Wells loves to talk pitching. He recalls his tenure in the minor leagues with Toronto, when Double-A Knoxville manager Larry Hardy brought in videotape of Steve Carlton so Wells could watch it and develop an appreciation for proper mechanics.

"People think of me as a rebel, a party guy and a go-out-every night-and-get-drunk [expletive] disturber because of my background. But I wouldn't be here if I didn't know what I was doing."
-- David Wells

Wells disdains between-starts bullpen sessions and throws in the pen only with a specific purpose. He thinks long toss is a better way to maintain arm strength and, like Maddux, understands that good control stems from sound mechanics and constant repetition.

But arm slots and leg drive don't make headlines, and we'll ultimately remember Wells for a mouth that did more than download pizza. The man certainly loves to talk.

• Boomer on media relations: "I don't like the media to begin with. When there's nothing going on, they'll create a story or a conflict. I get enjoyment sometimes out of reading the BS. I mess with the media, trust me. I make them think I'm ticked off, because I bash them. Then I'll plead the fifth. I won't say nothing to them."

• Boomer on Dennis Eckersley, now a TV studio analyst in Boston: "Have you heard him lately? He's terrible. It's like he never did anything wrong. You get that Hall of Fame [label] and you can say anything you want, but it doesn't always make you right. It could make you worse as an individual, and I think that's the way he's going. It's sad the way he dogs his own hometown. He's representing Boston. Say positive things, not negative things -- like how lucky they are. He had a big old strike zone when he pitched, so he was lucky too."

• Boomer on the art of keeping teammates loose: "I like messing around and playing practical jokes. Walking through the dugout and laying a stinky old fart and crop-dusting the whole bench. To me, that's funny. You just have to get some hard-boiled eggs in you to get the stench."

Wells personifies the old-time ballplayer to the "nth" degree. He thinks takeout slides and retaliation pitches need to make a comeback, 100-pitch limits are a crock, and that it's sad more young players don't appreciate Marvin Miller's efforts in establishing the Players Association.

He wishes he could have played somewhere between the 1920s and the '60s, when wool uniforms were in vogue, doubleheaders were regularly scheduled events and pitchers dwelled in a DH-less universe. The money wasn't as good back then, but the beer seemed colder and the baseball purer. And a player could be a student of the game and actually have a personality.

"People think of me as a rebel, a party guy and a go-out-every night-and-get-drunk [expletive] disturber because of my background," Wells says. "But I wouldn't be here if I didn't know what I was doing."

David Wells, master craftsman, technician and entertainer, has come home to San Diego to pitch in as many big games as the Padres can throw his way. Graduation day can wait.