NAPLES, Fla. -- If Boston general manager Theo Epstein made one thing eminently clear at the Daisuke Matsuzaka press conference, it's that the Red Sox are a respectful bunch.

After confirming that Boston had won the rights to negotiate with the Japanese pitching star over the next 30 days, Epstein steadfastly declined to provide further details out of "respect" for Matsuzaka, the Seibu Lions, Japanese professional baseball and Major League Baseball. 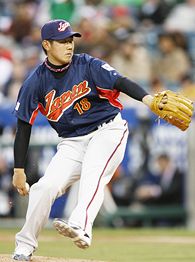 The Red Sox respect the New York Yankees, too, apparently enough to inject a startling new wrinkle into their rivalry. Call it "spending without borders." As distasteful as that approach might seem to fans in other towns who are sick of the whole Athens vs. Sparta thing, at least it's nobler than using a flawed system to pull a fast one on George Steinbrenner.

When word filtered out last week that the Red Sox had bid about $40 million for the right to talk to Matsuzaka, some observers assumed they did it simply to ensure the Yankees failed to land the player.

Then Seibu announced Tuesday night that the actual figure was $51.1 million. Let's just say the news blew Mark DeRosa's $13 million contract with the Chicago Cubs right out of the water.

For sake of reference, the $51.1 million figure is more than the 2006 Opening Day payrolls in Kansas City, Pittsburgh, Colorado, Tampa Bay and Florida. Alex Rodriguez couldn't be reached for comment, but our guess is that even he thinks it's a lot of money.

Now it's roll-up-your-sleeves time for the Red Sox, who will begin communications with agent Scott Boras and make arrangements to bring Matsuzaka to Boston on a get-acquainted tour. There's no turning back now.

Without a good faith effort to sign Matsuzaka, the Red Sox pretty much torch their efforts to make inroads in the Far East, at a time when the most visionary and innovative franchises have to think about international growth.

They'll risk a backlash with the fans in New England, who will be running on coffee and adrenaline as they wait on the phone lines at WEEI to offer opinions in the coming days.

Aborted negotiations would be an embarrassment for Matsuzaka, who would lose face in a huge way if he had to return to Japan. And just imagine the looks on the faces of the Seibu folks as they contemplate that $51.1 million check failing to materialize.

The 30-day window complicates matters back here in the land of hot stove reality. While the Red Sox are negotiating with Matsuzaka, life goes on in baseball. Jason Schmidt, a potential fallback guy for Boston, will be talking to clubs, weighing offers, and most likely choosing a home for 2007 and beyond. So will Barry Zito and Alfonso Soriano and all the other free agents out there. Are we to believe that the Red Sox would invest all that time and energy strictly to aggravate George Steinbrenner?

Matsuzaka is 26 years old, a veteran on the world stage, and a potential marketer's dream. He also provides staff ace insurance in the event that Curt Schilling retires in a year, Jonathan Papelbon's shoulder isn't quite right, and Josh Beckett turns out to be something less than a No. 1.

"[Matsuzaka] has great makeup, a great feel for pitching. ... I've seen him throw six pitches that are above average at one time or another. It's unbelievable. "
-- a National League scout

"I love him," said a National League scout who has watched Matsuzaka pitch at least six times. "He has great makeup, a great feel for pitching, and he can field his position. I've seen him throw six pitches that are above average at one time or another. It's unbelievable."

The length of Matsuzaka's deal could be a sticking point. Boras, in all likelihood, would prefer to negotiate a three-year contract for, say, $15 million annually, then take Matsuzaka out on the market again when he's 29 years old and a proven winner on the biggest stage. It's believed the Red Sox favor a more long-term commitment, at lord knows what kind of dollars.

The only sure thing is that it will get done, at which point Epstein will hold another press conference and actually provide some insights. Does anyone envision a press conference at which Epstein stands up and says the talks unraveled over money?

"Their credibility would go right out the window," said an official for a National League club at the meetings. "Who would want to go to Boston after that?"

Naturally, you can question whether the Red Sox would have been smarter to invest their money in Johnny Damon, or if it's reckless to go this wild over a Japanese pitcher when the main historical precedents are Hideo Nomo (123-109 in 11 big-league seasons) and Hideki Irabu (aka the "fat toad"). This move doesn't quite jibe with the new image of the farm-friendly Red Sox, earnestly upgrading through the draft and player development.

But at this point, there's no reason to question Boston's resolve in its efforts to sign the man that Epstein respectfully calls "Mr. Matsuzaka." If anything generates the necessary momentum to complete a transaction, it's a $51.1 million down payment.