"If Ozzie Smith was as good as Adam Everett, he was incredible."
-- Chris Dial, Baseball Think Factory defensive analyst

"I can say in my heart of hearts that he's the best defensive shortstop on the planet. From what I've seen, there's no way he can't be."
-- Astros third baseman Morgan Ensberg

PHILADELPHIA -- Adam Everett doesn't feel much like God's gift to middle infielders today. Citizens Bank Park is underwater, so Houston and Philadelphia won't be playing the finale of their three-game series. But early flights are impossible to come by, so the Astros will spend several hours in the visiting clubhouse eating, working out, watching "Office Space" on DVD and eating some more.

The downtime allows Everett to take stock of reality. The season is two weeks old, and he already has four errors, compared to his total of seven for all of 2006. The perfectionist in him, naturally, craves a do-over.

"It's driving me nuts," Everett says. "It doesn't seem like I've had a true hop all year, but that's the way it goes. Maybe I'll get on a run where I make four the rest of the year." 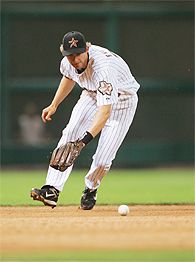 And maybe, if National League infields are kind and the scorers cut him some slack, he won't make any errors at all.

Within the confines of the Houston clubhouse, Everett's teammates wouldn't be shocked if that occurred. They rave about his preparation and positioning, his knack for making the difficult look routine and his ability to execute routine plays with such dispatch that it's test-pattern-caliber boring to watch.

If baseball fans outside Houston are unacquainted with Everett's brilliance, it's a reflection of his weak offensive numbers (a career on-base and slugging percentage of .665) and his low profile as an Astro.

"If he was in a big market, it would be all over the place how good he was," says pitcher Roy Oswalt. "Same thing with Lance Berkman. If he was in New York, he wouldn't be able to walk out in public."

So the public is oblivious because Everett is a banjo hitter in a football market. We can only guess what the excuse is for National League managers and coaches who keep overlooking him in the Gold Glove balloting.

Despite a reputation within baseball as the best defensive shortstop going, Everett has taken an 0-fer on the game's big defensive prize. The last two years, the NL coaches and managers have given the Gold Glove to Giants shortstop Omar Vizquel, who won't relinquish his death grip on the honor even as he approaches age 40.

Last year's result was especially disappointing for John Dewan, a Chicago-based statistician who is trying to do for Everett what Oprah Winfrey did for author Wally Lamb: introduce him to a larger circle of admirers.

Dewan, founder of Baseball Info Solutions, is on a mission to quantify defensive excellence in a way that fans, front office people and the statistically oriented can embrace. Since 2003, Dewan's staff has charted every ball hit in the majors and assigned it a percentage of difficulty based on direction, distance, speed and the route the ball took (ground ball, popup, fly ball, liner or "fliner"). The more plays a player converts above what the average defender would have made, the more points he receives. The more he fails to make, the more points are deducted.

The findings, released last year in "The Fielding Bible," are a testament to Everett's skill. From 2003 through 2005, he received an aggregate rating of plus-76, compared to a minus-64 for the Yankees' Derek Jeter. Bill James examined the disparity in a 4½-page essay in Dewan's book and concluded that Jeter can't carry Everett's jock, never mind his glove, as a defender.

Last year, Everett outdid himself with a plus-43, the highest rating in the four years the system has been in effect. In November, he won a "Fielding Bible Award," given out by a 10-member panel that included Dewan, James, Strat-O-Matic creator Hal Richman and ESPN.com's Rob Neyer. Everett received 98 of 100 possible points, edging Detroit catcher Pudge Rodriguez for the honor of best defensive player in the game.

And still, no gold. The coaches and managers certainly looked at that Fred Manrique-like offensive production and determined Everett wasn't worthy.

"My first reaction was, 'I failed,'" Dewan says with a laugh. "I failed to get the word out and make a strong enough impression that this man should have won the Gold Glove. Omar Vizquel is a great shortstop, and he had a great year. But he's No. 2 in the National League to Everett. There's no question in my mind."

Everett, congenial and self-effacing, appreciates the support but is mildly embarrassed about being touted over the likes of Jeter and Vizquel.

"Derek Jeter is a pretty good player, last I saw," Everett says. "I think 30 teams in baseball would have him on their team."

It's the type of low-key response you might expect from a self-made player. Everett, a Georgia native, spent his freshman and sophomore years at Harrison High School at second base because an upperclassman had a claim on the shortstop position. He played second base in summer ball too, because of the talented shortstop at nearby Pace Academy -- a kid by the name of Michael Barrett.

Everett learned his fundamentals the hard way. His high school coaches, Mike Power and Mark Elkins, stationed him on a tennis court with a foam rubber paddle on his left hand and hit hot smashes with a baseball in his direction. Without the luxury of a glove, Everett grew accustomed to using his hands and fielding tricky hops.

Boston saw enough potential to select Everett in the first round out of the University of South Carolina, then traded him to Houston 18 months later. Everett made four stops with Triple-A New Orleans, and eventually refined his game under the tutelage of former Astros manager Jimy Williams. It was Williams who taught Everett to take the ball out of his glove the right way and throw from the proper arm angle to minimize errors. Everett also became adept at backhanding the ball in the hole and throwing on the run. To this day, Everett and Williams refer to the maneuver as "the Nomar play," in honor of a former Boston shortstop who had it mastered.

Everett still remembers a piece of advice that Berkman gave him several years ago. "If you're going to make a mistake, make it aggressive," his Houston teammate told him. "Don't make it passively, because then it just snowballs."

Some gifts just come naturally. Everett has a strong enough arm to play deep, and he's so fluid at ranging to his left that he can cheat in the hole and still make plays up the middle. Through hours of watching tape, Dewan discovered that Everett's feet are always set when he throws, and he rarely gambles and loses on a forceout at second base.

"If you don't look back, he may move before a certain pitch. They'll hit the ball right over the mound and I'm thinking, 'That's a hit all the way.' The next thing you know, he's standing right there making the play."
-- Roy Oswalt

While some front office executives are skeptical of new-age defensive metrics, Morgan Ensberg thinks the findings by Dewan and others are a "godsend" for Everett, because they substantiate what the Astros have known all along.

"A lot of shortstops have different mannerisms that are really exciting," Ensberg says. "They move really quickly and dive and come up with a lot of action and the arm is really whipped. Adam dives and gets up and kind of throws the ball over there and is just incredibly efficient. That hurts him, completely. People don't even recognize what just happened because of the way he makes it look."

Houston's Craig Biggio and Brad Ausmus, who've been around a combined 35 seasons, claim Everett is the best they've ever played alongside. He's as subtle as a shadow and as reliable as a Rolex.

"If you don't look back, he may move before a certain pitch," Oswalt says. "They'll hit the ball right over the mound and I'm thinking, 'That's a hit all the way.' The next thing you know, he's standing right there making the play."

Everett's teammates and supporters in the statistical community are no longer shocked by anything he does. The surprise will come when the rest of the world starts paying attention.