Well, Darrell Rasner sure picked a lousy day to throw 16 of 22 first-pitch strikes.

Any chance of Rasner making headline news for his role in New York's 5-0 win over Seattle on Sunday vanished in the time it took Bob Sheppard to introduce a 44-year-old marvel with 348 wins and an endearing way of saying "y'all." It's hard to go from Kei Igawa and Colter Bean to euphoria in a span of 48 hours, but the Yankees somehow pulled it off.

We'll know better in a month or two how well Roger Clemens is adapting to comeback No. 3, which is sure to pose a bigger challenge than his midsummer revivals in Houston. American League lineups are deeper and more formidable than NL batting orders from 1 to 9, and at some point, the aging process has to dictate a drop-off in performance, right?

But the Yankees are in no position to question why these days. And if Clemens needed a reason to return to the Bronx, he had lots of them beyond an $18 million payday. 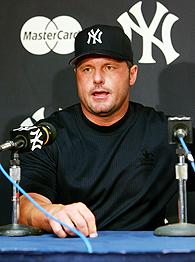 He's rejoining his buddy Andy Pettitte in the rotation, in a place where he's comfortable and has a chance to be a legitimate difference maker. As a bonus, he doesn't have to suffer through another summer of dispiriting 1-0 and 2-1 losses in Houston. Whatever his rationale, Clemens made the process look easy by choosing the team with the deepest pockets and the biggest need.

Truth is, beyond the New York-Boston-Houston axis, the news of Clemens' return will be greeted with something less than breathless anticipation. A healthy segment of the baseball world has grown tired of Clemens' annual agonizing over his destination and considers the routine self-indulgent in a Brett Favre-esque kind of way.

"The story gets a little old," said a National League executive who pronounced himself "underwhelmed" by the news. An American League scout even joked that New York might be the best place for Clemens because he doesn't have to share the spotlight with a certain bloody-sock-wearing blogger in Boston.

"He and [Curt] Schilling wouldn't have been a good match, between who wants the glory more," the scout said.

But the skeptics don't have the pressure a $195 million payroll brings, or a streak of 12 postseason appearances to maintain, or the specter of Yankees owner George Steinbrenner -- no matter how much he has slipped -- sitting in judgment after 15-11 losses to Seattle. Those are the issues that define Yankees general manager Brian Cashman's existence these days.

Down the road, the Yankees have to be concerned about a bullpen with the heaviest workload in the American League. As of Sunday, New York's relievers had thrown 112 2/3 innings to a mere 75 for Boston's bullpen.

As relieved as thousands of "Mike and the Mad Dog" listeners must feel today, it's nothing compared with the sense of jubilation experienced by New York relievers Scott Proctor and Luis Vizcaino. The possibility actually exists that they'll be able to enjoy two straight days off between now and August.

Yes, Clemens averaged just a tick less than six innings per start with Houston last season. But he still struck out 8.10 batters per nine innings -- more than Schilling, C.C. Sabathia, John Lackey and A.J. Burnett, among others. National League batters posted an anemic .593 OPS against him.

"He's still Roger Clemens, and the momentum he brings [to the Yankees] doesn't make me feel good," an AL East official said. "We were glad to see him in the National League. I wish he had stayed there."

In hindsight, it's amazing how dramatically a team's fortunes can change in a week. Last Sunday, the Yankees lost for the fifth time in six meetings with Boston. Mike Mussina was waiting to come off the disabled list, and Chien-Ming Wang had a split fingernail. Manager Joe Torre was monitoring yet another Carl Pavano side session in the bullpen, and Marty Miller, the team's director of performance enhancement, was taking heat for a seemingly endless run of strains and pulls on the roster.

"He's still Roger Clemens, and the momentum he brings [to the Yankees] doesn't make me feel good. We were glad to see him in the National League. I wish he had stayed there."
-- An AL East official

Things got even worse in Texas on Tuesday, when rookie Phil Hughes left a start after 6 1/3 no-hit innings with a pulled hamstring. That's when Miller was destined to become the team's former director of performance enhancement.

Today? The Yankees can look forward to running out a rotation of Mussina, Wang, Pettitte, Clemens and Hughes sometime in June. For a team that leads the majors in runs scored, that group has the potential to be more than good enough.

The irony is, Cashman's new master plan for the Yankees was heading away from the time-honored practice of throwing money at every problem. The Yankees traded Gary Sheffield to Detroit for three young pitchers in November, and they rebuilt their farm system by refusing to deal away Robinson Cano, Melky Cabrera, Hughes and their other top prospects for immediate, high-priced help. New York's minor league talent, ranked 27th in the game by Baseball America in 2004, currently checks in at No. 7.

But there's nothing like a crisis to make a club revert to old habits. Think about it: The Yankees are about to spend $4.5 million a month on a guy who's 3 months older than Jamie Moyer.

Maybe we'll look back in September and consider it the mother of desperation moves. Or maybe this is where it all turns around for the Yankees. For a middle-aged dude, the Rocket sure has a flair for making hearts beat faster. He's the Messiah and Methuselah rolled into one.