PHILADELPHIA -- Cole Hamels was a shy kid growing up in San Diego -- skinny, undersized and content to hang in the background with his buddies. The main exception was the pitcher's mound, where he asserted himself at an early age and embraced the showman within.

"I've always wanted to impress people since I was 9 or 10 years old,'' Hamels said. "When you're in Little League, your mom and dad and grandparents are there and you want to show them what you're all about. Then it's scouts -- or girls. I guess that's the masculine thing, to want to impress people. But I've learned to use it in a good way.''

Hamels is now 23 and in his second season with the Philadelphia Phillies, and the list of admirers keeps growing. It consists of teenage girls, their little brothers and dads, scouts and front-office executives, teammates and local newspaper columnists. Even Howard Eskin at WIP radio has a hard time finding fault with him.

The man upstairs is equally impressed -- and we're not talking about Philadelphia general manager Pat Gillick.

"Every night, when Cole Hamels kneels beside his bed and says his prayers, he's interrupted by God, who breaks in and thanks himself for creating Cole Hamels,'' Phillies starter Adam Eaton said, with only a trace of a smile.

The list finally winds its way to opposing hitters, who are enhancing Hamels' reputation in the most elementary way -- by striking out in droves.

Hamels, 6-1 with a 3.30 ERA, ranks third in the major leagues in strikeouts behind Baltimore's Erik Bedard and San Diego's Jake Peavy, and his 4.12-to-1 strikeout-walk ratio puts him a fraction behind two-time Cy Young Award winner Johan Santana of the Twins. 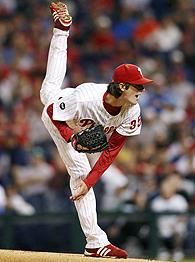 In 32 major league starts, Hamels has 215 strikeouts. According to the Elias Sports Bureau, that's the most by a lefty in his first 32 starts since Vida Blue whiffed 232 batters for Oakland from 1969 through 1971.

Hamels' last outing, a 6-2 win over the Brewers on Wednesday, was impressive even by his standards. He struck out Milwaukee's Rickie Weeks, J.J. Hardy, Prince Fielder and Billy Hall to start the game, and carried a perfect game into the seventh inning. A Weeks walk and a Hardy home run gave the 42,713 fans at Citizens Bank Park an excuse to finally relax and enjoy their Ryan Howard bobblehead dolls.

As Hamels prepares to follow up that effort Tuesday night in Florida, the Milwaukee hitters can offer the Marlins some free advice: Don't bother sitting on the changeup, because it's a chore to hit, even if you know it's coming.

Brewers third baseman Craig Counsell, who was fortunate enough to be a spectator Wednesday, listened to a bunch of dour reports from teammates returning to the dugout.

"Guys were saying the deception on that pitch is just different,'' Counsell said. "It feels like you see it forever, and it never gets there.''

The Brewers were complimentary of Hamels after his victory. On the bus ride back to the hotel, Weeks told reliever Matt Wise that Hamels' arm speed on his fastball and changeup were indistinguishable. Milwaukee pitching coach Mike Maddux was more impressed with Hamels' high baseball IQ. He's seen enough radar-obsessed youths in recent years to have an appreciation for a young pitcher with guile.