At least the Milwaukee Brewers got something positive accomplished while losing five of six games to the Dodgers and Padres on the West Coast.

During a stop in Los Angeles, Bill Hall, Jeff Suppan, J.J. Hardy and Chris Capuano made a cameo appearance on the soap opera "The Young and the Restless." The show is set in the town of Genoa City, Wis., and the plot calls for the four Brewers to visit the office of Wisconsin state senate candidate Jack Abbott for a photo opportunity.

Capuano, in an e-mail to ESPN.com, described the experience as an enjoyable one. The Brewers received a tour of the set, rehearsed briefly with cast members Peter Bergman and Michelle Stafford, then completed their scene in two takes.

"At first I thought this was a testament to our unparalleled skill, but I was later told if you can't get it right in two takes, you can't be on a soap opera, given the massive volume of material they shoot each day," Capuano said. "I think safety in numbers was the key for us."

When the episode airs June 20, the Brewers will join an impressive array of ballplayers who graduated from hitting, pitching, spitting and scratching in front of a camera to something completely foreign. For want of a better word, we'll call it "acting."

Hernandez gets the nod over Paul O'Neill, who was quite convincing in a sick-kid-in-the-hospital routine, and Bernie Williams, who chastises George Costanza, the Yankees' assistant to the traveling secretary, for booking the team at "that Ramada in Milwaukee."

Hernandez puts the moves on Elaine, who objects to his smoking habit, and asks Jerry to help him move furniture -- the ultimate in male bonding experiences. He nails his lines with the self-assurance one might expect from a former National League co-Most Valuable Player.

The plot concludes with a JFK-like conspiracy sequence involving Kramer, Newman, Hernandez and a mystery expectorator in some grainy film footage outside Shea Stadium. The producers initially wanted Darryl Strawberry for the role, but Hernandez suggested Roger McDowell, who will forever be known as "The Second Spitter."

Eight of the nine animated stars are unable to play for unforeseen reasons. Scioscia suffers radiation poisoning, Mattingly is cut from the squad for refusing to shave his sideburns and Clemens becomes convinced that he's a chicken after a session with the team hypnotist.

The lone survivor is Strawberry, who coincidentally plays Homer Simpson's position. But Homer is summoned to pinch hit in the ninth inning, and drives homes the winning run when he's hit in the head by a pitch with the bases loaded. He is carried off the field unconscious.

The original plot called for Canseco to have an extramarital affair with Bart's teacher, Edna Krabappel, but the writers reworked the script because of objections by Canseco's then-wife, Esther. In a subsequent DVD release, writer Al Jean notes that all the ballplayers were great to work with except one "whose name rhymes with Manseco."

Sparky Anderson on "WKRP in Cincinnati"

The Big Red Machine teams in Cincinnati landed their fair share of off-field gigs. Who can forget Johnny Bench as a waiter in the "The Partridge Family," or a military guard in "Mission Impossible"?

The most memorable bit came courtesy of Anderson, the Reds' lovable and avuncular manager. In the WKRP episode, Mr. Carlson hires Anderson to host a new call-in show, "Sparky's Bullpen," to the consternation of the terminally nerdy Les Nessman.

Upon Sparky's arrival at the station, Jennifer Marlowe (Loni Anderson) greets him by telling him she attended every game when he managed the Reds.

When the show turns out to be a fiasco, Carlson is forced to jettison his hero, which prompts Sparky to utter the classic line, "Every time I come into this town I get fired!"

Leo Durocher on "Mister Ed," "The Munsters" and "The Beverly Hillbillies"

Durocher, man about town and friend of Frank Sinatra, parlayed his show-biz connections into several sitcom appearances in the 1960s.

The plot never strays: Leo the Lip stumbles across a phenomenally talented horse (Mister Ed), a hick (Jethro Bodine) and a lab experiment gone wrong (Herman Munster), and tries to recruit them for the Dodgers until the truth finally reveals itself.

In the "Hillbillies" episode, Durocher mistakes Jethro and his uncle Jed for caddies at the golf course. After Jethro displays a throwing arm that would put Roberto Clemente to shame, Durocher does the obligatory double take.

"Son, how long can you throw like that?" he asks.

"Oh, only a few hours," Jethro replies. "Then I have to switch to my left arm."

In the "Mister Ed" show, Ed shares hitting tips with Moose Skowron and is filmed sliding into home plate. He looks a lot more comfortable than Todd Stottlemyre stumbling into third during the 1993 World Series.

The Durocher formula was such a surefire success, only one question remains: How the heck did he miss Uncle Fester and Floyd the Barber?

Gary, owner of Gary's Olde Town Tavern and Sam Malone's nemesis, angers the Cheers gang by stealing and breaking a bowling trophy. The interbar pranks keep escalating until Gary calls a truce and sends over his buddy Boggs to sign some autographs as a goodwill gesture. 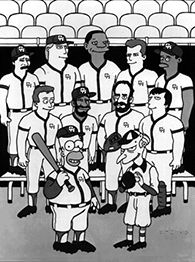 The Cheers gang, skeptical to the end, chases Boggs out of the bar and steals his pants, wallet and all, to verify his true identity. The episode ends with a triumphant Carla holding the trousers as a trophy and the Cheers regulars shouting, "We're No. 1."

In the aforementioned "Simpsons" episode, Boggs is punched out by Barney Gumble, the lush at Moe's Tavern, during an argument over which British prime minister was the best. Boggs picks Pitt the Elder, while Barney favors Lord Palmerston.

Lefebvre, the loquacious former Dodgers second baseman, worked as an actor in the offseason to supplement his baseball income. He appeared on "Batman" as a henchman of the Riddler, played by John Astin.

The plot: The Riddler lures Batman to a faux birthday celebration and traps him in a huge cake made out of quicksand. The scheme is on the verge of working until Batman, wearing his experimental bat-heel rockets, miraculously escapes.

Lefebvre, who now works for Major League Baseball in international development, received a check for about $60 for his efforts.

Lefebvre and former Dodger Al Ferrara were also part of a cannibal tribe that tried to cook Bob Denver and friends in a pot on "Gilligan's Island." Lefebvre's big line was "Gooba, ooba, gooba," which he believes is Cannibalese for, "They went thataway."

Naturally, we asked if Lefebvre was a Ginger or a Mary Ann guy.

Mark McGwire on "Mad About You"

Big Mac had a busy winter while being feted as a hero following his 70-homer performance in 1998. He met Pope John Paul II in St. Louis, attended movie premieres for "Patch Adams" and "The Thin Red Line" and traveled to Mexico and Australia, where he was mobbed by American tourists.

He also made a guest appearance on "Mad About You," the NBC sitcom starring Paul Reiser and Helen Hunt. McGwire is filmed in bed with Hunt during a "virtual reality" sequence, and later kisses her during an encounter in Paul and Jamie Buchman's kitchen.

"I think he might be the next John Wayne," general manager Walt Jocketty said in the spring of 1999.

Not everyone shared that opinion.

Spahn knew something about life in the military after serving in the U.S. Army during World War II and winning a Purple Heart and Bronze Star for bravery. He fought in the Battle of the Bulge and took shrapnel in the foot during a battle at the Ludendorff Bridge in Remagen, Germany. He received a battlefield commission for his efforts.

In 1963, Spahn appeared in a "Combat!" episode titled "Glow Across the Sky," in which Sergeant Saunders (Vic Morrow) and his squad are trapped in the basement of a house surrounded by Germans and must comfort wounded soldier Billy Nelson.

The twist: Spahn, American war hero, is cast as a German soldier.

Sandy Koufax on "Dennis the Menace"

Koufax was a versatile guy. He played a policeman on "77 Sunset Strip," a cowboy on "Colt .45" and dropped in to teach some valuable lessons to Dennis Mitchell's little league team while visiting his aunt in Hilldale.

How good an actor was Koufax?

"I don't want to be a critic, because he was my teammate," said Lefebvre, who played with Koufax in Los Angeles for two seasons. "As long as he kept throwing strikes and dropping that curve on people, who cares?"

Honorable mention
Bucky Dent: The Yankees' shortstop is more wooden than a shipment of Louisville Sluggers in the role of Kyle Jessop in the "Dallas Cowboys Cheerleaders" movie. At least the ratings are good.

Don Drysdale: Yep, Big D is the man responsible for giving young Barry Williams delusions of grandeur in "The Brady Bunch." At least he has the decency to return and set things straight.

Bob Gibson: The Cardinals' star teaches Mark Wedloe a little something about sportsmanship and fair play on "Gentle Ben."

Reggie Jackson: Mr. October appears on "Mr. Belvedere" with Hank Aaron, Willie Mays, Mickey Mantle, Johnny Bench and Ernie Banks, as part of the greatest power-hitting assemblage ever to grace a sitcom. And we're not even including Bob Uecker's 14 career homers.