ORLANDO, Fla. -- The 15-day free-agent filing period still is in effect, so Major League Baseball's general managers are devoting their annual meetings to trade talks, surveying the landscape, and fraternal bonding in the shadow of Disney World.

Once the 30 clubs gather for the winter meetings in December in Nashville and the wraps are off the checkbooks, that's when life will officially get goofy.

In the meantime, we're trying to get a grip on where the hot stove season is headed. So we surveyed 15 general managers, assistants and other assorted personnel at the Hyatt Grand Cypress for their thoughts on the following five questions. Here are the results:

1. Where do you expect Alex Rodriguez to be playing next year?

Contract estimates ranged from a low of five years and $150 million to a high of 10 years and $300 million.

You never know when agent Scott Boras will be able to pull a $350 million rabbit out of his hat. As an American League assistant GM observed, "With Scott, what's most obvious isn't always the right answer." 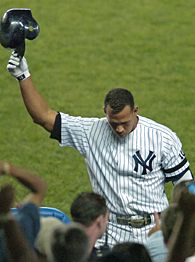 No one, for example, would have identified the San Francisco Giants as a prime suitor for Barry Zito or the Seattle Mariners as the team that was going to shell out $64 million for Adrian Beltre. With Boras, there's always the potential for a wild-card contender, a dark horse or the inevitable "mystery team" to enter the equation.

But right now, all signs point toward the West Coast.

While the Angels generally have low-keyed their interest level in Rodriguez, they're the logical front-runner. The owner, Arte Moreno, is intensely competitive and hungry for a title, and the Angels need a power hitter to take some strain off Vladimir Guerrero. The Los Angeles market would be a boon to A-Rod's off-field endorsement opportunities. And Boras, who has season tickets to both the Angels and the Dodgers, could have a field day playing one club against the other.

For all the Mets speculation making the rounds, GM Omar Minaya has enough on his plate trying to find pitching and fill holes at second base and catcher without adding a full-fledged A-Rod pursuit to his agenda. Do the Mets really want to have to trade Carlos Delgado to make room for David Wright at first base -- or even shift Wright to second -- to accommodate Rodriguez?

The Orioles are a major long shot but worth filing under "intriguing." A-Rod grew up idolizing Cal Ripken Jr. The Peter Angelos-Boras dynamic took a step forward when the O's signed Georgia Tech catcher Matt Wieters in the June draft. And if Rodriguez goes to Baltimore, that could pave the way for local boy Mark Teixeira to sign with the Orioles as a free agent next winter. Of course, a $25 million investment in A-Rod seems excessive for the Orioles. But it's not quite so outrageous when you consider they're committed to more than $27 million for Melvin Mora, Jay Gibbons, Aubrey Huff and Jay Payton next season.

Interestingly enough, no one that we surveyed mentioned the Boston Red Sox, the Detroit Tigers or Seattle as the prime A-Rod destination. But it's a long winter, and rest assured, those clubs will be coming to an Internet rumor mill near you shortly.

Three respondents predicted that Bonds will retire, and one executive said he'll be "in jail."

Judging from his 1.045 combined on base-slugging percentage and 28 homers in 340 at-bats, Bonds still has plenty to offer with a bat in his hands. "Dollar for dollar, he may be the biggest difference-maker available as far as number of wins he's going to put on the board for you," an AL general manager said.

Although it's not etched in stone that Bonds has to play in the AL, the designated hitter option ensures that teams there would be able to get the most out of him. But where? Oakland is the obvious choice for the usual reasons: It's a short trip across the San Francisco Bay, so Bonds wouldn't have to relocate to a new market where the fan reaction might be hostile. And Athletics general manager Billy Beane never has been afraid to go against the grain.

"Bonds is a typical fit for what Billy usually does," an AL personnel man said. "He waits for the Mike Piazzas and Frank Thomases to not have a job, then brings those guys in. To me, [Bonds] fits their profile pretty well as a hitter."

Jack Cust hit 26 home runs in 395 at-bats last year, so the A's already have a low-cost, left-handed hitting alternative at DH. And they can live with an outfield of Nick Swisher in right, Mark Kotsay in center and a Travis Buck-Chris Denorfia platoon in left. But if it's January and Bonds magically falls out of the sky, rest assured that Beane won't categorically dismiss the possibility.

The Rangers, who disavow any interest in Bonds, make sense for a couple of reasons: They had pretty good luck with Sammy Sosa in 2007, and they need to upgrade an offense that ranked eighth in the AL with a .754 on base-slugging percentage.

Given Bonds' personality, off-field image and likely salary demands -- not to mention the upcoming release of the George Mitchell report -- this is a decision that's likely to be made above the general manager level.

"I think some owners are stepping in and saying, 'Thanks, but no thanks,' an AL assistant GM said. "The [home run] record is broken, and any sort of cachet you get from that is in the rearview mirror. Now you're looking more at the baggage."

3. Who would you want in center field, Torii Hunter or Andruw Jones?

It's hard to believe that in 2005, Jones was coming off a 51-homer season and Scott Boras envisioned him as the crown jewel of the 2007-08 offseason. A .222 batting average will take a lot of luster off a player's image.

Even though Jones played at a lighter weight last season, he's not aging gracefully. He just won his 10th straight Gold Glove, but the consensus is that he's not the defender he used to be. He also lost points because of his failure to adjust at the plate, his seeming nonchalance and all-around regression last season. Jones posted a .413 slugging percentage -- lower than Melvin Mora, Kevin Millar, Kenny Lofton, Mark DeRosa, Yuniesky Betancourt and Jose Bautista, to name a few.

"He has so much ability, it's ridiculous," a National League official said. "That's what he's relied on all these years. But now he has to kick in the afterburners, and it's just not happening."