Leo Mazzone is going home. A native of western Maryland, he considers Baltimore as part of his heritage. It is one of the great sports towns of all time, and anyone who has performed there never forgets the love affair between its citizens and athletes. I think at some level we all wish we could go back, and as good a friend as Leo is, I find myself just a little envious of him today.

Leo's agent, Todd Thrasher, and his attorney, Jack Reale, negotiated a three-year contract with the Baltimore Orioles that will pay him more than any pitching coach has ever been paid. Reale was highly impressed with the Baltimore front office, emphasizing the decisiveness and professionalism of general manager Mike Flanagan. 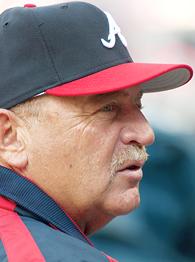 In talking with Leo after the deal was finalized, I learned that manager Sam Perlozzo is one of his best friends, and that their relationship had a great impact on Leo's decision as well. "We got it turned in Atlanta in 1991, so there is no reason we can't do it in Baltimore now," enthused Mazzone.

A bunch of teams have courted Leo Mazzone since he established himself as the indisputable champion of pitching coaches. The Orioles won the Mazzone Sweepstakes with a terrific contract, but Leo's heart was stolen long, long ago. The Colts of Unitas and Mackey and the Orioles of Brooks and Frank Robinson were unique in the '60s and '70s. Their mystique lives on in the hearts of all of us who were there.

When we were introduced five years ago by my friend Thrasher, I made a fool of myself by going into a rant about the fact that I am a closet baseball freak who really wanted to pitch in the majors and did not even watch football as a kid, who watches him rocking to and fro with regularity and knows that he is the greatest living coach in any sport (five years before ESPN.com proclaimed that truth); I also told him I could not wait to watch his pitchers perform because they execute the basics more consistently and better than any staff ever and that I would love to pick his brain, and on and on. ... Until I noticed he was not listening.

I was startled out of my adrenalin rush by his stare, focused on my right hand. He was paying no attention to my adulation, just fixating on my hand. It is crunched up like any NFL lineman's, and out of embarrassment, I usually try to hide both hands, but he was totally absorbed. After an awkward pause, I figured it out. He's fascinated by my Super Bowl ring. I'll take it off and show it to him! Wrong. He has plenty of big-time rings.

At length he reached over, took my battered paw with its crooked fingers and said reverently, "This is the hand that snapped the football to Johnny Unitas." When he looked up, I swear there were tears in his eyes.

"Are you from Baltimore?" I asked.

"Yeah, sort of," he responded. "I was at all those games you played. I cannot believe I just shook the hand that hiked that ball all those years to that guy."

I became respectful of his sincerity in that instant, and as time has passed and we have had time to talk it over, I realize I share his feelings about that incredible place and time. In the front cover of his book, "Tales from the Braves Mound," which Leo co-authored with Scott Freeman, he wrote: "To Bill ... for all who loved the Baltimore Colts."

The record
As Casey Stengel was fond of saying, "You can look it up!" For anyone with the capacity to understand direct statistical analyses, the Mazzone Effect stands alone in major league history for pitching excellence.

In his thorough and straightforward manner, J.C. Bradbury has done the math. According to Bradbury, since 1991, Leo's first full year as the Braves' pitching coach, Atlanta has been No. 1 in Major League Baseball in average earned run average. For those who suggest that Mazzone has simply been the recipient of good fortune in the work of GM John Scheurholtz and manager Bobby Cox, there is a more detailed analysis.

Bradbury studied every pitcher that pitched at least one full year for Mazzone. He posted the results on his website Sabernomics.com last December, and they are startling, even for serious Leo fans.

Having Leo Mazzone for a pitching coach lowered pitchers' ERA by more than a half run. In other words, the guys got better when they got to Atlanta, and regressed after they went elsewhere. The only consistent factor through all those pitchers and all the sophisticated statistical analyses is the presence of one man, Leo Mazzone.

Mazzone's mantras
I did indeed have the privilege of picking the great man's pitching brain. I spent most of my youth doing essentially nothing but standing on a mound in College Park, Georgia, throwing a baseball, so I was mesmerized. For the rest of you baseball addicts, here is what I learned. Each statement is a direct quote from Leo:

1. Throw the radar gun out the window.
After he said that, I realized (with the exception of John Smoltz) the Braves have had virtually no dominant arms in all these years.

2. Constantly work on commanding a down and away strike with your fastball.
I tried to remember how many times I got beat when I threw a good fastball down and away for a strike. I could not, even with my below average ability.

3. Pitching is like lining up a golf shot.
I thought of the ability of great teachers to reduce complex activities to simple pictures for athletes, who are virtually all very visual creatures.

4. The emphasis is on the pitch. Everything else works off it.
As elementary as this sounds you would be amazed by how many coaches in all sports outsmart themselves by talking too much. Great coaches simplify.

5. Throw more often with less exertion.
When I heard those words, I thought of Unitas and Raymond Berry working pass routes for hours after the rest of us had gone in. They were not running full speed.

6. We work, but we enjoy ourselves.
Self explanatory in this crazy, tension-filled world.

During my first week with the Green Bay Packers, Vince Lombardi sat down with me and explained every play of the vaunted Packer offense. I value Mazzone's insights as much as I do those of coach Lombardi. In each case, Hall of Famers had spent personal moments to impart a kind of wisdom that simply does not exist elsewhere.

True greatness
We have two grandsons, Alex (8) and Elliot (6). Our son Bill Jr., the wide eyed boys and I were Leo's guests at the Braves' game with the Cubs on July 5. It was the boys' first major league game. As fate would have it, Greg Maddux was pitching for the Cubs. We were invited onto the field with coach Mazzone before the game, and I wondered if the boys might hyperventilate ... or was it me doing the heavy breathing?

When Alex haltingly expressed a desire to be a pitcher, Leo responded, "Well then, Alex, you have to go to the ballpark a whole lot!" Alex responded that he sure would do that. As we made our way to our seats, Alex observed, "Gosh, he's a cool guy!" I agreed.

Maddux got beat by his old coach; we got rained on and had the time of our lives. I was reminded that truly great people always have time for children and friends.

Now I'm reminded that Atlanta owes a great debt of gratitude to an amazing coach, and should not begrudge his chance to be where he wants to be as he completes his career.

I guess I'll have to take the boys to Camden Yards next year.

ESPN college football analyst Bill Curry was an NFL center for 10 seasons and coached for 17 years on the college stage.