CHICAGO -- The champagne flowed like open fire hydrants Tuesday night, which surprised no one. After all, what's a clinching without shaving-cream projectiles, and faces slick and shiny from the bubbly stuff? Even so, the Yankees partied as if they meant it after beating the White Sox, 7-0, and claiming their sixth straight AL East title.

Joe Torre stood in the middle of the miniature clubhouse riot and talked about the Yankees' need to "let off some steam." It's been a long, controversy-filled summer in the Bronx -- with plenty of intrigue ahead.

Indeed, Derek Jeter said, "this is only the first step." As much as the Yankees relished holding off the Red Sox, the real test of their $180 million payroll begins next week in the Division Series.

October will be a long, joyless month -- at least until the Yankees win the World Series. That's assuming they win. That's assuming they even get there. Until they do, George Steinbrenner's tentacles are wrapped around every single Yankee, squeezing, demanding, still obsessing over last year's stunning, four-game loss to the Angels in the ALDS.

The Boss initially contemplated across the board firings after the 2002 season. Instead, he cleaned out the shelves on an international shopping binge -- signing Cuban pitcher Jose Contreras and Japanese outfielder Hideki Matsui. The win-or-lose credo hangs over the Yankees this year as never before.

So what happens if they don't win? Then what? Here's a look at the possible doomsday scenarios.

Yankees lose to the Twins in the ALDS
This would be the most embarrassing scenario of all, considering the Yankees' payroll is three times the Twins', and the Bombers would've gone into the Division Series with a 7-0 regular season record against Minnesota.

So who would be the first casualty? Baseball executives ruefully agree GM Brian Cashman would be dismissed -- although as one industry peer put it, "teams would be lining up to hire Brian one hour after he got fired."

Still, Cashman's stunning record of achievement since 1998 -- four pennants and those six consecutive Division titles -- wouldn't count for much with Steinbrenner, who would demand to know why his $180 million investment couldn't get the Yankees past a weaker first-round opponent for a second straight year.

Cashman's replacement could be super-scout Gene Michael, who served as the Yankees' GM in the early '90s and laid the groundwork for the club's current renaissance. Steinbrenner could also decide he needs a financial innovator -- someone who's proved he can succeed with fewer dollars.

No one fits that description better than Oakland's Billy Beane, although one person close to Beane said "there isn't a chance in hell" he'd accept a job in Steinbrenner's fiefdom. Beane would never conform to the Boss' rigid, corporate lifestyle -- "the guy wears sandals to work, OK?" the friend said -- and he'd reject the Yankees' bi-polar power structure, split between New York and Tampa.

The other mystery is whether Steinbrenner would fire Torre following a first-round loss. No one's sure because the Boss has contradicted himself so many times this summer.

When the Yankees were on the verge of being caught by the Red Sox, Steinbrenner was ready to blame Torre, saying, "this is the team Joe wanted. I gave him everything he asked for." 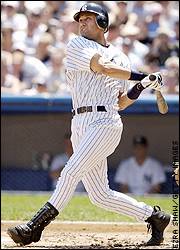 But Steinbrenner also praised Torre when the Yankees pulled away in September, saying, "Joe's job is safe." No one believed Steinbrenner, of course. Another first-round defeat could result in Torre being replaced by Bucky Dent, who has rehabilitated his managerial career with the Yankees' Triple-A affiliate in Columbus.

Still, it's a long shot. As great as Steinbrenner's desire to take down Torre, he still owes his manager $5 million for the 2004 season. The Boss is also aware of Torre's unrivaled popularity with the Yankee public. In a credibility-contest with the fans, Torre still beats the Boss every time.

Yankees lose to the A's in the ALCS
Once again, Cashman catches the blame, losing to an Oakland team that squeezes by on a $50 million payroll -- 25th in the big leagues. Even though the Yankees would last longer in the postseason than in 2002, Steinbrenner decides he's had enough of overspending. He fires Cashman although, ironically, he offers Beane an unprecedented $5 million a year contract.

But Beane, who turned down the Red Sox last year, once again proves he has no appetite for the East Coast Type-A mania. He ultimately accepts an offer from the Dodgers after they fire GM Dan Evans. Cashman moves on to the Reds, and Steinbrenner promotes assistant GM Jean Afterman, congratulating himself for breaking baseball's gender barrier.

However, Steinbrenner wisely decides to retain Torre for the final year of his contract, thus saving that $5 million. That softens the blow of the ongoing exodus from the Bronx: Roger Clemens retires, David Wells signs with the Padres and Andy Pettitte agrees to a long-term deal with the Rangers.

Yankees lose to the Red Sox in the ALCS
All the same firings/defections, with one additional move. Torre is dismissed, too, with Steinbrenner beginning discussions with former Mets manager Bobby Valentine on a four-year deal.

The Boss realizes Valentine would shock and disrupt a clubhouse accustomed to Torre's gentle demeanor, but he decides it's time to punish his Bombers.

Yankees officials beg Steinbrenner to reconsider. Even Beane counsels the Boss to chill. "The Red Sox are a damn good team," Beane says, unwittingly sentencing himself to permanent Boss-exile.

The Boss can't accept the humiliation of watching the World Series begin in Boston. Someone, anyone -- everyone -- has to pay.

Yankees lose the World Series
Even as American League champions, it's a joyless winter. Torre and Cashman are summoned to Tampa for a weeklong "evaluation" of their performances, and Steinbrenner waits until mid-November before deciding both men will return in 2004. But, as the Boss coldly announces, "there will be changes." 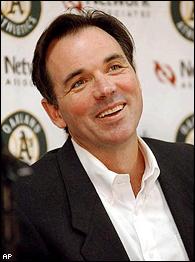 Most of Torre's coaches, including his trusted friend Don Zimmer, are dismissed. Torre mulls quitting but refuses to swallow the bait. Sullen and depressed, he decides he'll manage one final season.

Cashman is similarly shackled, forced to commute to Tampa all winter, where he must report directly to Steinbrenner and an economic braintrust. The Yankees' payroll explodes to $200 million. Even though Clemens, Pettitte and Wells are all gone, the Yankees blister the free-agent market by signing Kevin Millwood, Sidney Ponson and Vladimir Guerrero.

Yankees win the World Series
Steinbrenner fails to attend the victory parade through lower Manhattan's Canyon of Heroes, choosing to remain in Tampa where he contemplates his new obsession: cutting payroll.

Clemens is allowed to retire. Wells' $6 million option for 2004 expires, after which Steinbrenner personally lures him back for half that. Cashman and Torre return for the final year of their contracts, but neither man gets a vote of confidence beyond 2004.

Indeed, two weeks into the exhibition season, Steinbrenner blasts the Yankees for their lack of focus. He insults Bud Selig. He shoots another commercial with Derek Jeter.