CORAL GABLES, Fla. -- It's been two weeks since George Steinbrenner summoned Alex Rodriguez to Tampa for a private meeting, but the ramifications of that summit linger. The Boss' words were designed to startle A-Rod, whose 2004 numbers were respectable but failed to elevate him to Reggie or Mattingly or even Derek Jeter-status.

Steinbrenner has a theory why Rodriguez hasn't yet swept up the Yankees with his Cooperstown talent: the third baseman was too worried about his friendship with Jeter. The Yankees prefer that A-Rod be a little less self-conscious, a little meaner, even if it calls for greater independence from the shortstop.

The message wasn't lost on A-Rod, who acknowledges there's still a "gap" between his career stats and what Yankee fans saw from him last year.

"(Steinbrenner) wants me to lead and lead by example and not to try to fit in," Rodriguez said the other day. "He told me, 'you already fit in, you're a Yankee. Now is the time to do what you do best.' "

A-Rod sees no slight at Jeter in Steinbrenner's mandate. In fact, he's quick to point out, "This is still Jeter's team because he's the captain. But my approach is not to be everyone's best friend. My approach is to win championships. The only way to do that is to be myself, and to take care of my world. With my talent people will follow naturally."

A-Rod is so committed to delivering on that promise, he declined an invitation to Jeter's celebrity golf tournament in Tampa last week, even though the guest list included Michael Jordan, Roger Clemens, Reggie Jackson, Wayne Gretzky and Lawrence Taylor. Rodriguez's absence didn't go unnoticed, as his handlers said the third baseman didn't want to interrupt his workout schedule.

Rodriguez's decision to skip the event indicates he and Jeter are indeed on separate paths now. He has equally distanced himself from Barry Bonds, despite having made a much-publicized appearance in New York with the Giants' slugger. For $7,500 apiece, fans were given the chance to chat privately with A-Rod and Bonds, netting the two nearly $2 million.

The difference, however, is that A-Rod donated his proceeds to the Boys and Girls Club of Miami. Bonds reportedly used the cash to decorate his new home. Rodriguez now concedes he made a mistake appearing with Bonds.

"I made the commitment a year ago, and I wasn't going to back out," he said. "But if I had to do it again, I would've made the appearance by myself. But I would've still done it."

That trip to Manhattan aside, however, A-Rod has spent the winter immersed in football-like workouts six days a week at the University of Miami, where he trains with the Hurricanes' strength coach, Andrew Swasey. There, Rodriguez lifts weights, runs 200-yard sprints and pushes sleds in 100-yard intervals with the school's varsity players, working out for three hours at a time before breakfast.

It's a massive, if not masochistic regimen. But Rodriguez is proud of the fact that while he's out of his house by 7 a.m, "there are 650 or 700 other players who are sleeping, or taking their kids to school. But there's no way they're going to be running the stairs or doing what I'm doing."

Why does A-Rod deliver himself into cardio-hell? Partly because exercise has been a part of his life since his teens. But A-Rod is also driven by that "gap." Despite hitting .307 after the All-Star break, and .421 against the Twins in the AL Division Series, Rodriguez has October scars, like every other Yankee. He went 2-for-17 as the Yankees were losing the last four games of the AL Championship Series to the Red Sox -- a collapse for which he takes "full responsibility."

Rodriguez reasons that, since he was supposed to be the key component in the greatest offensive machine the Yankees had ever assembled, Games 4-7 can be traced back to him.

"I was brought here as the final piece of the puzzle, and we were supposed to win," A-Rod said. "For that, I accept the blame." 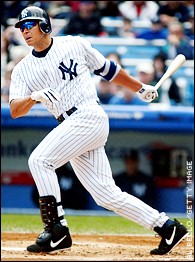 Of course, it's not just A-Rod whose fingerprints are all over that Yankees' collapse. Mariano Rivera failed to get the final three outs in Game 4. Gary Sheffield went 1-for-17 after being quoted calling the Red Sox "a walking disaster." Kevin Brown and Javier Vazquez combined to put the Yankees in a 6-0 crisis by the second inning of Game 7. And teammates say Tom Gordon was so unnerved by the series' pressure, he was throwing up in the bullpen before failing to hold a two-run lead in Game 5.

But Rodriguez has his own asterisk. In the eighth inning of Game 6, with the Yankees trailing by two runs, Jeter on first and one out, A-Rod tried to slap the ball out of Bronson Arroyo's glove after a dribbler back to the mound. It was an otherwise unforgettable moment for the Yankees, considering A-Rod was called out for interference and Jeter had to return to first base.

Yet, Rodriguez called it, "a smart play, one I would've made again."

"In the heat of the moment, you do things sometimes out of instinct," Rodriguez said. "I thought it was a smart play, and we almost got away with it. We put an umpire in the position of having to turn over a call like that in Yankee Stadium. It gave us a shot. (Umpire) Jim Joyce told me, 'if you'd knocked the crap out of (Arroyo) it would've been legal because he was in your way.' So if I had a chance to do it again, I would've tried to run him over. Even though I probably would've hurt someone with my weight and velocity, dropping my shoulder down."

The failure to score another run in the inning, however, was part of the greatest setback in Yankee history, and Rodriguez says, "I'll never forget that. I'll be 75 years old, thinking, 'what could we have done differently?' But the great thing about baseball is you get another chance this season, and I'm looking forward to that."

The redemption will have to wait until October, though. The Yankees learned the hard way that ruling the April-to-September universe doesn't mean much if the Red Sox emerge as world champs. That's one reason why Yankee fans still haven't fully embraced A-Rod, at least not in the way they have Jeter.

That's the gap A-Rod refers to, one which he's trying to shrink 100 yards at a time.

"I shouldn't be accepted yet because the team didn't achieve its goal," Rodriguez said. "The best love is earned love, and I want to earn it like Paul O'Neill earned it, like Roger Clemens. And I haven't done that yet."