NEW YORK  Joe Torre doesn't like to call it guesswork because there's more to rearranging his lineup every night than that. Mix-and-match doesn't quite cover it, either because, as the Yankees' hierarchy admits, not all the parts match. When Torre, bench coach Joe Girardi and hitting instructor Don Mattingly decide on a batting order, they're bound by a philosophy that mirrors the Bombers' bizarre, bipolar season.

"It's pretty much do what you have to do," Torre said this week. "I've never been a one-lineup type of manager. Definitely not this year." 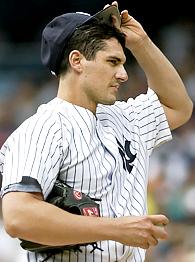 Not when the Yankees have witnessed a changing of the guard at first and second base, left and center field  all without making a trade. Tony Womack is now in left field, struggling woefully at the plate. Hideki Matsui is nursing a bad ankle. Jason Giambi is drawing walks but not much else, and after posting a .708 slugging percentage in May, Tino Martinez is in a 4-for-43 slump and battling plantar fasciitis in his right foot.

The result is a state of near-constant change in Torre's fiefdom  which, depending on what week you sample, has either worked brilliantly or else left the front office perplexed, if not concerned.

As the Yankees were dropping three of four games to the Devil Rays  and watching their record within the division fall to 11-19, the worst of any AL team besides the Royals  Billy Connors and Bill Emslie, two high-ranking members of the Tampa brain trust, were dispatched to New York to evaluate the team, according to the New York Post.

That might mean changes are coming, although Yankees officials haven't decided on a single strategy to rectify the streakiness. The Bombers had just come off six straight wins against the Pirates and Cubs, but this week's slump has left everyone with the uneasy sense that a deeper, more insidious problem lurks.

Looking back, the decision to end Bernie Williams' run as the everyday center fielder represents a turning point for Torre and GM Brian Cashman. There was an initial dividend  within a week, the Yankees began a 17-2 spurt  but Womack's deficiencies have since bled the offense dry. He came to the Yankees as a base stealer or, at the very least, a run scorer, but his 31 runs tie him for 56th in the American League. He's 37 points below the league average for a left fielder and has the lowest OPS among Yankees regulars.

Womack realizes there's no fit for him in pinstripes, not while he's playing the outfield. But the Bombers are committed to Robinson Cano at second base, which means Womack is ideal trade bait  if and when Cashman goes shopping next month.

But the Yankees can't quite decide what it is they're looking for. Before last week's six-game winning streak, there was talk of the Bombers actually becoming sellers. The (Newark, N.J.) Star-Ledger reported that everyone except Derek Jeter, Mariano Rivera and Alex Rodriguez would be made available. The rumors receded briefly while the Yankees were nuking the Pirates and Cubs, but this week's struggles against Tampa Bay have spurred fresh talk of Barry Zito, Mark Kotsay and even Tom Glavine coming to the Bronx.

In the meantime, Torre insists he's committed to Matsui in center field. That means Womack will remain as the full-time left fielder, although Ruben Sierra made a rare start in left Thursday night against the D-Rays. All of this means Williams will be eased back to the bench once Matsui heals  a decision Torre doesn't expect the soft-spoken veteran to agree with but does expect him to accept, at least.

"As long as Bernie understands, that's what's important," Torre said. "It's not about liking it or not liking it. That's not what this is about. As long as my players are professional about the moves I'm making."

Torre says he'll continue to mix and match  or, do whatever it takes, to borrow his vernacular  with the lineup. But he has concluded the defense cannot be improved dramatically no matter which way he turns. Nor will a bump in run production solve any long-term problems. Instead, Torre is banking his fortunes on starting pitching, which is precisely how he has prospered since 1996.

"It's always been about our starters, that's how we've won games and what I'm looking for now," Torre said. "If you don't get good pitching, you create problems for yourself everywhere else."

That philosophy worked when the Yankees had dominant starters, but the current ratio of runs scored/runs allowed (5.5 to 5.06) explains why the Bombers are struggling to stay over .500.

Randy Johnson suffered his worst outing in five years Tuesday, allowing the Devil Rays to score seven runs in three innings, including three home runs. One scout who has seen the Big Unit pitch this season says he's no longer the Yankees' hardest thrower. "From what I see, it's [Tom] Gordon," the scout said.

After Johnson's meltdown, Carl Pavano took a 3-2 lead into the seventh inning Wednesday, then allowed a three-run home run to Nick Green. With a 4.69 ERA, Pavano has been a disappointment to the Yankees and a surprise to National League managers.

After watching Pavano allow the Cubs 10 hits and six runs in 5 1/3 innings last Friday, Cubs manager Dusty Baker told The New York Times, "Pavano isn't throwing like he threw in our league [with the Expos and Marlins]."

Not even Chien-Ming Wang, who the Yankees think has the best sinker/two-seam fastball on the staff, was able to rescue the Yankees from the embarrassment of losing a series to the D-Rays. He was battered for eight hits and five earned runs in six innings during a 9-4 loss Thursday.

For all his shuffling and lineup surgery, Torre once again failed to crack the code on his enigmatic team.

"It's frustrating," the manager said wearily. "We just can't get this machine going in the right direction for a long period of time."