NEW YORK -- Speak slowly, the Yankees veteran said. And make sure you're looking right at him.

That was the advice offered to a reporter on his way to a one-on-one with the Yankees' Chien-Ming Wang, a native of Taiwan who has considerably less command of English than his thunderous two-seam fastball. Wang is intelligent and polite, but in a clubhouse where English and Spanish dominate (with Japanese not far behind, spoken by the dozens of reporters covering Hideki Matsui) few conversational roads lead to his native Mandarin Chinese.

So Wang's education comes from watching television and movies on DVD -- little snippets of English that are easing his assimilation. Still, Wang's Americanization is far from complete. When asked where he's living this summer, the pitcher sheepishly said, "Somewhere in New Jersey," but couldn't identify the town. 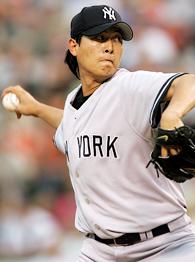 "I do get lost driving," Wang admitted with a smile. "But that helps me learn."

Such is the delightful mystery of the 25-year-old right-hander, who's 6-3 with a 3.89 ERA, and was the Yankees' best starter in the first half. Joe Torre spoke for the entire organization when he asked, "Where would we be without him?" But like everyone else in pinstripes, Torre knows little about the fine print of Wang's life.

Where did he come from? How did he rise so quickly through the Bombers' system? And why didn't other clubs inquire about Wang while he was still in the minors?

The lack of interest in Wang baffled the Yankees right up until April 30, when he was summoned from Triple-A Columbus.

"For two years, we didn't get a single call about him," general manager Brian Cashman said. "Now, teams know better than to ask."

Cashman's endorsement couldn't have been any clearer. The Yankees aren't trading Wang, apparently convinced of the need to (finally) harvest their own crops. Wang will be a critical part of the second-half pursuit of the Red Sox, beginning with this weekend's four-game series at Fenway. So far, Wang's sinker, called the best on the Bombers' staff, has allowed Torre to live without Kevin Brown and Jaret Wright, and has lessened the effects of Randy Johnson and Carl Pavano's combined inconsistencies.

While the Yankees once prided themselves on an elite starting rotation, today they're 10th in the AL with a 4.55 ERA. Pavano, Wright and Brown are all on the DL. Johnson shuttles between being a Hall of Famer and a 41-year-old with a flat slider. Mike Mussina is suffering from his worst strikeout/innings pitched ratio in almost a decade. The only guarantee, it seems, is Wang's ability to deaden opponents' bats.

The American League is batting just .249 against him, the lowest among Yankees' starters, while his 2.48 ground ball/fly ball ratio is the rotation's best. Wang will face the Red Sox Friday night, featuring that heavy-sinking fastball that teammates say is even more poisonous than Brown's.

"His ball sneaks up on you," says catcher John Flaherty. "Wang has that nice, easy delivery, just like Mo [Mariano Rivera] and then the ball just explodes. I know guys around the league, friends of mine on other teams, who say Wang is someone they want to face. But they can't hit him. Even when they know that sinker is coming, it's very hard to put it in play."

Even when he was playing in college in Taiwan, and later as a member of his country's national team, Wang was clocked at 93 mph. He has a unique, short-arm delivery, which could explain why he needed shoulder surgery in 2001, forcing him to miss the entire season. Yet the Yankees thought enough of Wang in 2000 to outbid the Mariners, signing him for around $2 million.

The Yankees are obviously pleased with the investment, although grateful is a better word. Wang works quickly and effectively, succeeding despite averaging only three strikeouts a game.

"Wang throws a lot of strikes, and gets a lot of hitters swinging early in the count," one American League scout said. "Everything he throws looks good until the last second. I'm sure guys love playing behind him."

"Definitely, he keeps everyone in the game," Derek Jeter agreed. "When you're in the field, it's easy to stay on your toes because the ball is always in play."

One Yankee who feels a particular bond with Wang is Matsui, a fellow Asian. But unlike the Japanese slugger, who is provided a full-time translator by the Yankees, Wang is on his own in the clubhouse.

"We are from the same part of the world, so, yes, I do feel closer to him," Matsui said. "It must be very difficult for him, not being able to express his thoughts fully. I can only imagine what it would've been like for me here, my first year, without [a translator's] help."

Wang appreciates the sympathy, but has assured the Yankees he and his wife of two years, Chia-Ling Wu, will learn English on their own.

"Chien doesn't need an interpreter, he's made that clear to us. He can speak just fine," Cashman said.

Long after Wang becomes fully conversational, however, it's likely he'll keep to himself in the clubhouse. Wang is soft-spoken to the point of shyness, which is how Torre describes his pitcher's life perspective.

"Nothing seems to bother him very much," the manager said.

Not even Fenway in a midsummer pennant race? The pressure will surely smother Wang like a second skin, which means the Yankees are about to find out whether shyness equals poise in this thousand-year war with the Red Sox.