NEW YORK -- Maybe this is some crazy, alternate universe that's swallowed up New York. The Mets rule the National League, if not the city itself, while the Yankees are losing just as often as they win in April.

Sure, it's a dozen or so games, a small sample. But here's more proof of how upside-down the world feels. While the Mets are off to their best start ever, the Braves had the major leagues' highest ERA until John Smoltz beat the Padres on Saturday night. Even now, only the Pirates have allowed more runs in the National League. It's enough to make you think a revolution is being hatched, and what better time to test this theory than now. 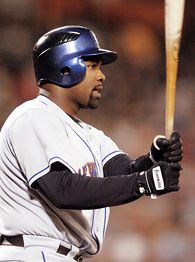 Welcome to the first Mets-Braves showdown of the season -- three games at Shea Stadium starting Monday night, which probably won't do much to raise Bobby Cox's blood pressure, not after his Braves have won 14 consecutive division titles. But the Mets aren't downplaying anything, least of all the momentum they've gained from winning nine of their first 11 games.

"It's a big series to start the year and let them know we're for real," Mets catcher Paul Lo Duca said. "The Braves are still the team to beat. You want to come out and play hard, and you want to let them know that we're not gonna go anywhere."

Tough talk, no doubt. But the Mets consider themselves overdue against the Braves, against whom they haven't won a season series since 1997. Even in 2000, when the Mets went to the World Series as the National League wild card, then-manager Bobby Valentine was unable to crack the code of Atlanta's dominance.

However, with a new crew led by out-of-towners such as Carlos Delgado and Billy Wagner, the Mets are investing heavily in these three games to make a point. To a man, they seem to agree with Lo Duca. While a series in April won't win (or lose) the division, it's not too early to make a point.

What a perfect coincidence, then, to have Pedro Martinez on the mound Monday night, fresh off the miniature classic he authored against the Nationals on Wednesday. And just as significantly, the Mets won't have to face Smoltz, who was characteristically brilliant in outpitching Jake Peavy over the weekend.

The Mets' ultimate goal of toppling the Braves comes down to one man (Pedro) and one question (can he stay healthy?). Martinez may or may not ever rediscover his 90-mph fastball, but that didn't hinder him against Washington. Even at 86-88 mph, Martinez still had a sufficient velocity differential between his four-seamer and his changeup, keeping the Nationals to just one run and three hits in seven innings. It was worth noting, too, that Pedro avoided reigniting his simmering war with Jose Guillen.

Of course, the Nationals can't be considered any sort of measuring stick for Martinez, just as the early-April schedule hasn't done much to challenge the Mets. The three teams they've conquered in series -- the Nationals (twice), Marlins and Brewers -- have a combined record of 14-22.

Still, the Mets' four-game lead over Atlanta is the largest in the big leagues, and the Braves' lack of pitching has made it that much harder to ease into the post-Leo Mazzone era. While the legendary pitching coach is trying to inch the Orioles' team ERA under 5.00, the Braves' starters have all floundered in his absence. And there's still no closer.

The fact that the Braves summoned Peter Moylan from Triple-A after just the first week of the season says plenty about their willingness (or need) to experiment. Moylan, a 27-year-old righty, failed in rookie ball two years ago but worked his way back into the big leagues after a strong performance for Australia in the World Baseball Classic.

Ultimately, it's the Braves' starters who'll have to stop the Mets' charge. Smoltz admitted to reporters on Saturday he's "amazed" at the continuing struggle -- a clear vote of confidence for first-year pitching coach Roger McDowell. Nevertheless, the three starters who'll face the Mets this week (Jorge Sosa, Kyle Davies and Tim Hudson) are a combined 0-4 with a 9.39 ERA.

Still, as vulnerable as the Braves appear to be, some Mets still consider that a mirage.

"To me the Braves are the team to beat, they're the favorites until we go out and actually beat them," Cliff Floyd said recently. "Every year they lose guys and you think, 'This is our year to get 'em.' But every year they manage to put it together and beat us.

"The important thing isn't what we think about them, it's what they think about us. It used to be if we beat them, they'd think, 'No problem, we'll get 'em tomorrow.' Now we want them to think, 'oh [expletive], we're in trouble.'"

So far, the Mets have done everything possible to tear away the layers of psychological scar tissue. Pedro seems healthy enough, even without his Red Sox-era velocity. David Wright, who's hitting over .400, seems unstoppable. And Wagner has buried the ghosts of Armando Benitez and Braden Looper, not to mention given the Mets a rare advantage over the Braves in the last inning.

One Mets senior official says that ultimately could decide the NL East in this bizarre, new universe.

"The Braves haven't needed a closer the last couple of years because they haven't had to worry about winning games in September; no one's put pressure on them," he said. "This year, hopefully, that's going to change."