NEW YORK -- So what's in store for the Yankees in the post-Randy Johnson era? The uncharacteristic stockpiling of prospects continues, but the starting rotation is nevertheless being held together by a series of hopeful assumptions -- which is another way of saying the Bombers are saying their prayers.

"There are question marks, and they're real," is what GM Brian Cashman was conceding shortly before a tentative agreement was reached to send Johnson back to the Diamondbacks (editor's note: Arizona reached agreement Sunday with Johnson on a $26 million, two-year extension that includes a $10 million salary for 2008; the deal won't become official until Johnson passes a physical on Monday). While the Yankees look like they will make out reasonably well -- shedding a 43-year-old pitcher in decline, coming off back surgery and otherwise uncomfortable in New York, all for a reported surcharge of only $2 million -- there's still the matter of filling in the Unit's 205 innings in 2007.

The Yankees are reasonably sure Andy Pettitte's cut fastball will be still effective in the American League, even if he's beyond his prime. And Chien-Ming Wang's sinker will continue to be poison to right-handed hitters for another season, even if he doesn't strike anyone out with it. Beyond that, however, the Yankees need at least two of the next three tipping-point issues to go their way to hold off the Red Sox.

Can Mike Mussina continue to be a 15-game winner at age 38? Can Kei Igawa cope with AL sluggers? And most important, can Carl Pavano stay off the disabled list after recent physical therapy corrected a misalignment in his hip that made one leg a half-inch shorter than the other? 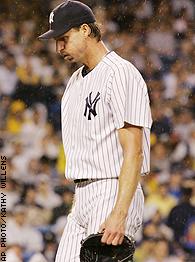 Cashman isn't naive enough to believe all these outcomes will be favorable, which is why the backup plans include Scott Proctor, who could evolve into a starter; Triple-A prospect Philip Hughes, who's almost certain to be promoted to the major league roster by midsummer; and Roger Clemens, whom the Yankees were lusting after even before Johnson started looking for the door.

One person familiar with the Yankees' courtship of the Rocket admits they have no inside track on the bidding. "All he has to do is say yes" and the Bombers would practically hand Clemens a blank check, said the source. But club officials are nevertheless in the dark about his plans. Not even Pettitte seems to know where his buddy is headed, which is potentially good news for the Red Sox. If Pettitte's return to pinstripes couldn't immediately sway Clemens, it means he could be destined to finish his career at Fenway.

Of course, it's possible the Yankees' sudden accumulation of young, cheap talent that would be acquired in both the Johnson and Gary Sheffield deals is leading to a mega-swap with the Twins, who've undoubtedly calculated (and fainted at) the cost of keeping Johan Santana after he becomes a free agent in two years. Cashman's army of youngsters might be the escape the Twins would need, given that Barry Zito is now earning $18 million per year.

Short of a deal of that proportion, however, the Yankees will keep their fingers crossed and stick to Cashman's business plan. So far, the GM has resisted the urge to empty the Yankees' coffers, safely underbidding for Daisuke Matsuzaka and refusing to go anywhere near Zito's free agency. Little by little, Cashman has restored a sense of order to the Bombers' operation, as the Yankees have gotten younger and cheaper. But when it comes to Pavano, Cashman admits he's abandoning logic in place of blind faith.

The GM insists the troubled right-hander is "100 percent healthy" after four-hour-a-day workouts in Arizona. Pavano's hip problems may or may not hold the key to making him a successful (or at least active) pitcher again, but Cashman is apparently serious about getting a return on the Yankees' four-year, $40 million investment.

Several teams, including the Cardinals, have called inquiring about Pavano's availability this winter, hoping to pry him loose without having to pick up much salary. To each of them, Cashman has said, no chance.

"GMs have asked me, 'Would you consider moving [Pavano]? If so, you'd have to pick up X number of dollars,'" Cashman said. "I've told them, 'Uh-uh.' I happen to believe Carl is going to be an effective and contributing member of this club."

Pavano might just pitch well enough to get himself traded in spring training. And Igawa might hold on to his No. 5 spot in the rotation just long enough for Hughes to claim it after the All-Star break. Any number of other prospects, including Jeff Karstens, will be rushed to the Bronx in the likely event that Mussina goes on the disabled list or is injured for the third year in a row. Amid all the uncertainty, the Yankees will be happy with the official departure of Johnson, whose 5.00 ERA, declining strikeout ratio and poor performance in back-to-back postseasons were enough to soil his legacy, at least in New York.

The Unit, cold and aloof from the first day, never fit in with the Yankees, spending most of his time at his locker with his back to his teammates. There was no emotional investment on either side; even the fans sensed Johnson was just passing through on his way to Cooperstown. Maybe it was Johnson's way of acting tough in a big market, or maybe it was his frustration at the stunning number of fastballs he threw over the middle of the plate, and the sliders that were usually flat.

Whatever the reason, Johnson was unhappy enough to look daggers at Johnny Damon last August when the outfielder tried to rally the slumping Yankees. In the middle of the clubhouse, Damon shouted to the whole team, "Come on, you [expletive]. Wake up!" From across the room, Johnson stared coldly, so unnerving Damon that he later asked a club official, "Did I do something wrong?"

The Yankees obviously haven't publicly indicted Johnson in their efforts to trade him, but it's clear no one will miss him. One employee said, "Randy was the kind of guy who, if you asked him, 'How's it going?' he'd stare you down and say, 'What do you mean by that?' He was the most socially awkward person I ever met around here."

Of course, Johnson's eventual departure will create a set of short-term problems, but for now, the Yankees are happily looking forward to a change in climate.

The clubhouse is about to get a whole lot warmer.