This just in from the other side of the wall: It's time to reconsider the whole proposition.

The Hall of Fame benchmark labyrinth, that is. The numerical ladder to the pantheon just doesn't work anymore, and that's not necessarily a bad thing. It is, in fact, going to force a general reconsideration of how to view players by those Hall of Fame voters who've traditionally taken the easy way out and looked for a statistical validation of their choices from year to year.

And I should certainly know: I'm one such lunkhead. Been voting for years, and there are still times when I check the numbers -- at the last minute, sometimes -- to see if they bear out what I'm thinking.

The Hall voting always has been like that. It's an odd little procedure, very personal, very subjective, and many of us have argued over the years that it is, in fact, a Hall of Fame and not of numbers. Still, you had your magic marks that were difficult to deny: 500 home runs, 300 wins, 3,000 hits. For a voter on the fence about as to the dominance or ascension of a player's career, one number could mean quite a lot. 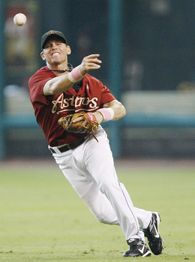 (I don't know if Craig Biggio is the slam-dunk Hall of Famer that a few people lately have made him out to be, if only because Biggio is almost a classic study of consistent quality that only occasionally rises to transcendent-player status. But I think 3,000 hits helps. It's really as simple as that. The number helps.)

But as Rob Neyer explains elsewhere on this site, 500 homers ain't what they used to be. We have witnessed a dramatic devaluation of that figure over the past two decades, with greater accomplishment suddenly skewing upward into previously unimaginable territory -- 600 and beyond.

And I'd add that there are important numbers -- wins, hits -- that seem to be sliding the other way, gradually farther from the view of today's player. Biggio's achievement, that is, may well stand taller as the years go by. Three thousand hits and 300 victories aren't merely difficult to attain; they're becoming endangered species as statistics.

Biggio reached 3,000 hits with only one season in which he recorded more than 200. In essence, he has gotten there by playing 20 years, with almost miraculous good health and the ability to play through injuries that would shelve other guys. He also had to want to stay employed in the game that long. In other words, he needed to be both constantly motivated and in one piece to reach this milestone.

Increasingly, I think, that's going to be the rub. For lots of reasons, including their staggering salaries and the wealth of opportunity beyond baseball that is open to so many of the truly elite, you're going to see fewer Biggios, not more of them.

You're going to see fewer Greg Madduxes or Tom Glavines, players who just stay and stay and stay. With five-man rotations and a normal season's worth of work, even a great pitcher is going to average maybe 15, 16 wins a year. At that rate, you've got to stick in the bigs for two decades to get to 300. Maddux is in his 22nd year, Glavine his 21st. How many more such players figure to come down the pike?

I wonder if, over time, 200 wins might become accepted as a career benchmark for pitchers -- the benchmark, maybe. You already see stories that celebrate a pitcher's 200th win, and rightfully so: every one of those victories was tough to get. Shoot, Mark Buehrle has 102 wins at age 28, and he's pretty good. Assuming 15 wins a year, he'll be about 35 by the time he gets to 200. Getting to 300 just looks out of the question.

And I think that's where the voters will have to go, too. Increasingly, we'll have to subtract some of our old notions from the Hall of Fame rubric. What if, over time, there just aren't any more 300-game winners? After Glavine (297) on the active list, there is Randy Johnson at 284. What if Johnson comes up, I don't know, seven shy? He was still, for years, the most feared and arguably most effective pitcher in baseball. That's worthy of a Hall conversation.

For those who care: Curt Schilling, age 40, has 213 career victories. The bloody sock may spend more time in Cooperstown, unless voters begin to agree that numbers don't always tell the story.

As for Biggio, there are some other players who might still reach 3,000 hits. Barry Bonds, a whole 'nother Hall of Fame argument, could get there next year if he plays. A-Rod will be in the 2,200s this season at age 31. Derek Jeter will be over 2,300 at the end of this season, and he's 33.

Then again, does a Hall voter really need to see Jeter reach 3,000 hits to know he's deserving of a vote? Certainly not -- and good thing. The old benchmarks are coming down, in some cases literally. We're going to be voting in the years to come on impact as much as anything -- and that, to me, goes hand in glove with the concept of a Hall of Fame, not a hall of numbers.