When the 2004 playoffs began, Carlos Beltran was a very good player headed for a substantial payoff in free agency. When the playoffs ended, he was Mickey Mantle headed for an enormous payoff. "October," one GM said, "earned him an extra $30 million." 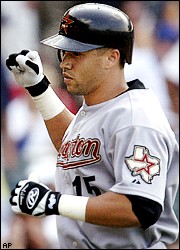 Beltran was that good in October. He hit eight home runs, tying Barry Bonds' record for most home runs in one postseason. He scored 21 runs, breaking Bonds' record for one postseason. He scored a run in 10 straight games, breaking the record of eight held by Babe Ruth and Home Run Baker. Beltran did what no player has done during any seven-game period of any postseason in history: amass seven homers, 14 hits, 14 runs scored and 12 RBI.

It was more than the numbers. The hits came at critical times: in Game 5 of the National League Division Series against the Braves, Beltran became the second player in postseason history to drive in five or more runs in a decisive game.

In Game 4 of the NLCS, Beltran took a 2-2 slider off his shoe tops, and drilled it into the bullpen in right center in the seventh inning for the go-ahead run in a 6-5 win over the Cardinals. "It was a very good pitch," said St. Louis reliever Julian Tavarez. "It was impossible to hit it that hard."

It wasn't just Beltran's brilliance from both sides of the plate. He stole second base in the ninth inning of Game 5, setting up Jeff Kent's game-ending, three-run homer. And then there was Beltran's defense, which was remarkable. In that Game 5, Beltran raced to his right and made a sensational diving catch in left center, robbing Edgar Renteria of extra bases, and assuring the score remained tied. The next inning, Reggie Sanders hit a drive to deep center. Beltran got such a great jump on the ball, and he's so fast, he caught the ball as he gracefully back-peddled up the hill in center field.

"I've done a header several times on that hill," said Craig Biggio, Houston's center fielder before Beltran. "That was amazing."

Beltran was amazing in every way in the postseason, his first postseason in the big leagues, which made what he did even more extraordinary. The question is, is he really that good? Is he really worth six or seven years, at $16 to $17 million a year?

The Mets thought so, agreeing in principle to sign Beltran on Sunday for $119 million over seven seasons.

After 5½ years in Kansas City and half a season in Houston, is he ready for the pressure that would come with playing a full season in New York, or another big media market? These are questions to ponder for the Mets, Yankees, Cubs or any team in the bidding.

Entering the playoffs, Beltran had not hit a home run in his final 89 at-bats. In September, he drove in seven runs in 97 at-bats.

"What I don't understand," said one member of the Astros, "is how he only hit .267 this year. Shouldn't it have been higher?"