The score was tied in the last of the 12th inning at Yankee Stadium in Game 2 of the 2004 American League Division Series. Derek Jeter was at third base with one out. Hideki Matsui hit a bullet line drive directly at Twins right fielder Jacque Jones. Maybe Jones didn't think Jeter would tag up -- a poor assumption -- or, more likely, Jones didn't have a chance to get his feet set and get behind the ball because it was hit so hard. Flat-footed, leaning backward, he made a weak throw to the plate. Jeter tagged up and scored the winning run.

"You made your decision to go as soon as the ball was hit?'' Jeter was asked.

"I made my decision to go before the ball was hit,'' Jeter said.

That's why Jeter is such a great baserunner, that's why he's our pick for the best baserunner in the game. There are other candidates, including Larry Walker and Roberto Alomar, but we'll take Jeter because of intelligence, aggressiveness, experience and speed.

"You can't go wrong with that choice,'' said Devil Rays coach Don Zimmer, who was a coach for the Yankees for the first eight years of Jeter's career. "He has something in him that a lot of guys don't have: it's instinct. I give a guy five years to become a good baserunner. If he's no good after five years, he has no chance. If you're bad after five, you'll be bad after 12: run until they tag you out. This guy was really good his rookie year, and things haven't changed. He's never out of position. He's always where he's supposed to be.''

Jeter is like Cal Ripken (I covered him every day for five years and saw him make one baserunning mistake), only faster. Jeter, like Ripken was, is so involved in the game, he never misses a thing. If a throw is off line, he takes the extra base. He's always aware of where he is, making it easy on the third base coach. He gets a great secondary lead, which is vital.

"Jeter is the best,'' one scout said. "A lot of players think of themselves as hitters when they get on base. Not him. The goal is to score a run. You have to get a good secondary lead, you have to be aware of the situation, to know the outfielder's arm, to make good turns. It's about concentration. Every good baserunner is thinking two bases at a time, not satisfied with one.''

It's a matter of smarts more than speed. "When I managed in Boston, our best baserunner was Carlton Fisk, and he was a big catcher,'' Zimmer said. "He always went first to third. He scored from second on a single. He knew how to get a lead.'' There is no smarter player than Jeter, which he proved in the 2001 playoff game against the A's when he darted across the infield, picked up an errant throw along the first base line and backhanded the ball to the plate to nail Jeremy Giambi. "It's interesting that Jeter was involved in that play,'' said a scout. "Everyone says the reason Giambi was out on that play was not because he didn't slide, it's because he didn't get a secondary lead. It takes no ability to get a secondary lead. When you don't, it's unacceptable. It's lazy.'' Jeter has never spent a lazy moment on the field, including running out a routine grounder. "You can hear him run to first base,'' said former Blue Jays manager Buck Martinez. 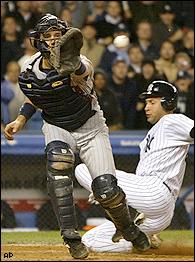 You could hear Jeter running down the third base line for the winning run against the Twins last October. "As a third base coach,'' Zimmer said, "you tell the runner every time, 'anything in the air or on a line, get back here.' Well, how many times do you tell them, and what happens, they break for home on a line drive, and can't get back in time to tag up? You say 'what happened?' They say, 'I froze.' You freeze in Canada, not on the baseball field.

Jeter made one as a rookie in 1996. He was caught stealing, the dreaded third out at third base. Manager Joe Torre was livid about such a rookie mistake. A half inning later, after playing in the field, Jeter came in the dugout and sat right next to Torre on the bench. Without saying a word, Jeter was telling his manager "here I am, I screwed up, let me have it, I'm accountable.'' Torre looked at him, laughed and said "get the hell out of here.''

It was probably the last big mistake Jeter made on the bases.

Tim Kurkjian is a senior writer for ESPN The Magazine and a regular contributor to Baseball Tonight.