Barry Bonds' historic journey began in 1986 when he was a slender, speedy, 185-pound leadoff hitter for the Pirates. Twenty years later, a bulky slugger who runs slowly on painful knees has passed the game's greatest and most legendary player, Babe Ruth, on the all-time home run list.

It has been a tumultuous voyage, especially lately. Bonds has been the center of the steroid controversy in baseball, the primary focus of the book, "Game of Shadows," and now, sources say, is being investigated by the federal government for possible perjury charges.

Passing Ruth into second place all time should be a cause for celebration, but Major League Baseball isn't recognizing it, Bonds gets booed wherever he goes on the road, and every once in a while a player takes a shot at him: Phillies pitcher Cory Lidle was the latest, saying he doesn't want to see Bonds break records. Hank Aaron dealt with racial hatred and ignorance on his road to 715. Bonds is dealing with some of that and much more, but unlike Aaron, he brought much of it on himself. 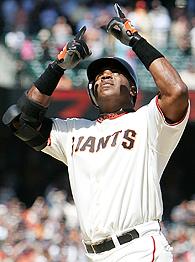 In a way, it is sad and unfortunate for Bonds and for baseball. Under normal circumstances, we would be carrying this guy around on our shoulders and proclaiming as he walked down the street, "There goes the greatest hitter who ever lived."

Indeed, Bonds' numbers place him behind Ruth and next to Ted Williams as the three greatest hitters in the history of the game. He has seven MVP awards; no one else has more than three. He set the single-season home run record with 73. He broke Ruth's seemingly unapproachable record for the highest slugging percentage in a season and obliterated Williams' single-season record for on-base percentage.

Of all his amazing numbers, his strikeouts might be the most amazing. In an era in which former Blue Jays shortstop Manny Lee once struck out 100 times in a season without hitting a home run, and in which Adam Dunn struck out 195 times (72 looking), Bonds rarely strikes out. In 2004, Bonds became the first player since George Brett in 1980 to have more home runs than strikeouts in a 20-homer season -- Bonds hit 45 that season, with only 41 strikeouts. The Rangers' Brad Wilkerson, for instance, struck out 37 times this April.

Bonds has been pitched to more cautiously than any player in history. He is the all-time walks leader; in 2004, he walked 232 times, more than Willie Mays' two highest season walk totals combined, and 62 more than the Babe's season high. Bonds has more intentional walks in this decade than anyone has in his career since the statistic became official in 1955. In 2004, he had more intentional walks -- 120 -- than any team in baseball history. That year, he was walked intentionally eight times with no one on base. In his career, he has been walked intentionally 69 times with first base occupied; the next four active players have 28 combined.

Such reverence has come in the last six years, but before this decade, Bonds already had Hall of Fame numbers. Even back in 1989, then-Pirates third-base coach Rich Donnelly said Bonds was the "best player in the game." Few Pirates argued. The power, the speed and the defense -- including eight Gold Gloves (no left fielder went to the line, wheeled and threw better than Bonds) -- were basically unmatched. Starting in 1990, he won three MVPs in four years.

Since turning 35, he has hit a home run every 8.3 at-bats, nearly double his home-run rate for the first 13 years of his career. And that is where the story gets confusing to some, and completely clear to others. If "Game Of Shadows" is accurate, Bonds' home run rate was directly affected by his steroid use, which is enough of an allegation to have people screaming for asterisks, abolishment of his records and "no" votes for the Hall of Fame.

This is all very cumbersome. It wouldn't be as big a deal if Bonds had, say, 300 home runs, but he just passed Babe Ruth as the greatest left-handed home run hitter of all time. And it's going to get more awkward as he continues his pursuit of a number even bigger than 715 -- 755. Maybe his knees won't hold out that long. Maybe he'll tire of the daily scorn aimed at him. Maybe the federal government will find something that will force him to stop playing. Or maybe he'll pass Aaron, something that MLB surely is hoping will not happen.

In Ruth's final season in 1935, he was 40, fat, tired and hitting .181 for the Boston Braves. His final three homers came in one game, in Pittsburgh. One cleared the roof at Forbes Field, a shot that was estimated at 600 feet. It would have been a perfect way to end his career. But Ruth played a few more games (no hits); Braves management made him play because he was such a road draw, adoring fans wanted to see him one last time.

That's how it would ideally end for Barry Bonds. But in most places, sadly, it won't.