Rick Sutcliffe was a great teammate for many reasons, none more important than for this: On days Sutcliffe pitched, when one of his guys was intentionally hit by a pitch, he would go to that player and ask, "Who do you want?" Then Sutcliffe would drill that hitter.

Retaliation has forever been a part of baseball. And it usually hasn't taken much for retribution to occur: Intentionally hitting a batter, admiring a home run at the plate, a slow stroll around the bases on a home run, a rolling slide into second base, stealing a base, dropping a bunt or swinging at a 3-0 pitch when you're 10 runs ahead, and peeking at the catcher's signs all might get a baseball thrown at you at a very high rate of speed. Rip a pitcher in a book, call him a choker, and he might throw at you every time up. 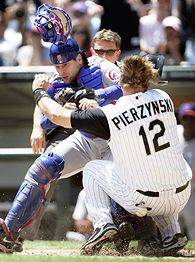 "If you disrespect the game, or an opponent," Astros catcher Brad Ausmus said, "not only will there be retribution, but your own teammates know there will be retribution, and that you probably deserved it."

Baseball is a hard game played by hard men. The game is underrated in its danger, the toughness of its players and its vengefulness. Maybe retaliation happens every Sunday in the NFL, but if Terrell Owens was a baseball player, and he pulled a stunt on the diamond like he did when he disrespected the star at the 50-yard line at the home of the Cowboys, Roger Clemens would have hit him in the head in his next at-bat. And in his next at-bat, he would have hit him again. So would Sutcliffe. So would a lot of other pitchers.

Forty years ago, when the game and the men were even harder, Gibson and Don Drysdale occasionally would dust the next hitter after allowing a home run. On May 1, 1974, the Pirates' Ellis announced, as retaliation from an incident the previous night, that he would hit the first three hitters of the game, then promptly did so. Nolan Ryan is as nice a man as you'll ever meet -- some teammates named their children after him -- but sometimes, he would say, "You have to take charge of a ball game," and that meant hitting or knocking someone down.

"Early in my career, Nolan dusted me for taking a big swing," said Harold Reynolds, a former Mariners second baseman who now works as a baseball analyst for ESPN. "He didn't think a skinny, little guy like me should be taking such a big swing off him. And I didn't even hit the ball."

Clemens threw a pitch at Roberto Alomar's neck one night in Toronto. Miraculously, Alomar got out of the way, then rifled the next pitch to right center for a double. That is the biggest difference between major leaguers and the average fan: If the average fan had a ball thrown that close to his head, he'd never get back in the box. Alomar got in and hit a rocket off the Rocket.

"That's the third time he's done that to me," Alomar said after the game. "Why? What did I ever do to him?"

Who knows? But it doesn't have to be much.

"I got thrown at for hitting three homers in a game," said Lopes, who played from 1972-87. "I got thrown at for stealing bases. I got thrown at because I played for the Dodgers. We were a popular team. We had a target on our backs. Some guys would throw at you because they didn't like you. And back then, we weren't wearing any armor."

Things have, indeed, changed when it comes to retribution.

"You can get away with a lot of stuff now that you couldn't before," Nationals first baseman/catcher Matt LeCroy said. "Retaliation is controlled by the umpires. With suspensions, it has really changed."

Lopes says retaliation "has been virtually eliminated compared to how it used to be. The game is no longer policed by the players, it's policed by the people above the umpires. They have taken the fear element out of the game. They have taken the intimidation out of the game. Pitchers don't even throw inside anymore. When they do, hitters get all upset."

"If you disrespect the game, or an opponent, not only will there be retribution, but your own teammates know there will be retribution, and that you probably deserved it."
-- Brad Ausmus, Astros catcher

After the A.J. Pierzynski-Michael Barrett home plate collision Saturday, one former pitcher said, "If I was still pitching I would hit Michael Barrett every time I faced him for the rest of my career."

You know Cubs pitcher Carlos Zambrano would have loved to have thrown at Pierzynski for his role in the collision, and for mimicking Zambrano's trademark celebration after Pierzynski hit a home run off him on Sunday. But Zambrano, remarkably, held back, knowing that if he had retaliated, he likely would have been suspended, which the struggling Cubs simply could not afford to happen.

So he will wait. But you can bet there will be retribution someday. Many years ago, Al Cowens was hit in the face by a pitch thrown by Ed Farmer. It broke Cowens' jaw. He didn't face Farmer for roughly a year and a half, but once he did and grounded out, he charged the mound: revenge has no expiration date.

Wayne Gross once took his time running around the bases on a grand slam many years ago. The pitcher was furious. He didn't get to face Gross again until three years later  when they were teammates. It was batting practice in spring training. The pitcher hit Gross in the middle of the back with a pitch. It was clear that he did it intentionally.

"What was that for?" Gross screamed.

"That was for three years ago!" the pitcher screamed back.