It is hard enough to hit a baseball, yet nearly one in five batters in the major leagues tries to hit a baseball from two sides of the plate. They are switch-hitters, and they all have a story about how and why they decided to turn around and hit from both sides. 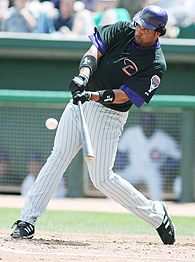 "I started when I was 11 years old,'' said Diamondbacks first baseman Tony Clark, who is 6-foot-7. "We went to the park every day and played, and since I was so much bigger than everyone else, my friends made me hit left-handed. I hit left-handed with my right hand on top [cross-handed] until I was 12. Then I asked my dad, who was my coach, if I could hit left-handed in a game. He put my hands the right way, and I singled up the middle.''

Hall of Famer Eddie Murray learned to switch-hit as a kid in his backyard, swinging at coffee can lids and anything else his brothers would throw to him. So when his Double-A manager, Jim Schaffer, told Murray to try switch-hitting, he tried it that night in a game, and got a couple of hits. The Dodgers' Jose Cruz decided to switch-hit as a freshman at Rice University in 1992, and batted over .300 in that first season as a left-handed hitter. Giants second baseman Ray Durham was made into a switch-hitter in pro ball in 1991.

"I was so bad at first. There would be days where I wouldn't get the ball out of the infield or wouldn't even hit the ball,'' Durham said. "I thought, 'There's no way this is ever going to work.' But after all the sweat, all the blood on my hands, now I'm actually better from the left side. I've hit left-handed twice against [lefty] Andy Pettitte. How do you figure that?''

Sometimes, there is no explanation. What we do know is that most switch-hitters are natural right-handed hitters who moved to the other side of the box for two primary reasons: (a) so they didn't have to see the breaking ball that was coming at them (it can be frightening and hard to hit); and (b) to get a step and a half closer to first base, which can result in more infield hits. White Sox manager Ozzie Guillen was such a lousy right-handed hitter when he signed at age 16, the Padres made him into a switch-hitter. But he became so much better left-handed that he dropped batting right-handed.

"My father made me a switch-hitter when I was 11 because my father loved Mickey Mantle,'' former major leaguer Carlos Baerga said. "I'm sure a lot of fathers did what mine did.''

Mantle's influence was significant, but not as important as the birth of AstroTurf and the return of the speed game. The 1987 St. Louis Cardinals, who won the NL pennant under manager Whitey Herzog, regularly used six switch-hitters, beat the ball into the turf and ran. By 1992, the big leagues had 99 switch-hitters, 17.2 percent of all nonpitchers. During that period, many speedy middle infielders were turned into left-handed hitters.

"My father made me a switch-hitter when I was 11 because my father loved Mickey Mantle. I'm sure a lot of fathers did what mine did."
-- Former major leaguer Carlos Baerga

One was ESPN's Harold Reynolds. "And I hit .590 in high school!'' he said. "But I had hit left-handed a lot playing Wiffle ball as a kid, so I tried it. My first year, I hit 12 home runs, 11 of them left-handed. But I'm ambidextrous. When I was a kid, I could throw a football 40 yards with my left hand. And in H-O-R-S-E, I would always use my left hand to win. But I had some bad days switch-hitting early on. And I remember Omar Vizquel trying to switch-hit early. He was terrible. I remember watching Ozzie Smith when I was 14. He was terrible. But we all started lifting weights, we got stronger and became better. I'd come home from pro ball, and my best friend, Mickey Riley, would throw to me. He could throw with either hand and could shoot a basketball with either hand. The key with switch-hitting is to hit exactly the same way left-handed as right-handed. But that's so hard to do -- find your identity from each side. The only two switch-hitters I've seen who were the same from each side were two of the best: Eddie Murray and Ted Simmons.''

The speed game has now become a power game. AstroTurf fields were replaced; there are only two left. Consequently, the number of switch-hitters decreased slightly as teams no longer emphasized beating the ball into the ground and running. But now, switch-hitters are slightly on the rise: 17.4 percent of all nonpitchers in 2006 are switch-hitters. But it's a new breed. These guys hit with power -- they are beating the ball over the fence, not into the ground. Atlanta's Chipper Jones has more home runs than any switch-hitter in the history of the National League. Texas' Mark Teixeira hit 43 home runs last year. Houston's Lance Berkman had 94 extra base hits in 2001. Arizona's Clark hit 30 homers last year. Boston's Jason Varitek hits with power. Oakland's Nick Swisher is among the league leaders in homers. And the common denominator for most of them is they started switch-hitting early in life.

"If you try to do it when you're 22, it's too late,'' says Mets infielder/outfielder Jose Valentin, a natural left-handed hitter who began hitting right-handed at age 13. "In Little League, you're just hitting fastballs and an occasional curveball. In pro ball, they're throwing sinkers, everything.''

Simmons, one of the greatest hitting catchers of all time, took up switch-hitting when he was 9. He is a natural left-handed hitter, but at the urging of his father, a left-handed hitter, he started hitting right-handed because that's the way his older brothers hit. "I've seen guys make the switch when they were in the big leagues: Tito Fuentes, Larry Bowa, Don Kessinger,'' Simmons said. "But, obviously, the earlier you start switch-hitting, the better.''

Boston's J.T. Snow, a natural left-handed hitter, started switch-hitting when he was 10, after he was hit in the back with a pitch. "It didn't feel very good,'' he said. But by 1999, he was struggling badly from the right side -- his weaker side -- and was getting so few at-bats from that side that he went back to hitting exclusively left-handed.