Baseball is a game of intangibles. It is a game that requires doing "the little things,'' which can mean something as big as barreling over a catcher or as subtle as a whisper in the ear of a teammate after a good or bad at-bat.

There are players all over the game with these qualities, such as Derek Jeter, who is that guy in the pickup basketball game who you look at and say, "We're going to win, he's on our team.'' Intangible players come in all shapes, sizes and job descriptions. Here are five of many in the major leagues. 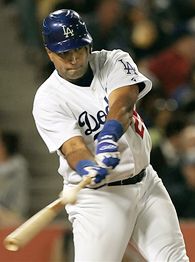 Sandy Alomar Jr., Dodgers
He just turned 40, but you would never know it by the position he plays (catcher), the shape he's in (he lost 20 pounds in the offseason) and the way he can still play.

"He comes to the ballpark like a 20-year-old every day ready to play knowing he's probably not going to play,'' said Dodgers third base coach Rich Donnelly. "And with less than two outs and a runner at third, I wouldn't mind having him up there. But mostly, he's a great teacher.''

Alomar has been a mentor to the Dodgers' two young catchers, Dioner Navarro and Russell Martin, who is on his way to being one of the best young players in the game at any position. Navarro and Martin followed Alomar wherever he went this spring, learning from one of the game's best defensive catchers and one of the game's most respected players.

Twenty years from now, when Martin's career could be potentially coming to an end, he may be asked where it started. And he certainly will say that a big influence on him was Sandy Alomar Jr., the big catcher he learned from in 2006.


Darin Erstad, Angels
His skills have eroded somewhat, his body has lost some of its life at age 32, but he remains the fiber that keeps the Angels together. That is clear in all he does, from dutifully switching positions -- center field to first base to center field; not an easy transition -- to steamrolling Braves catcher Johnny Estrada at home plate two years ago ... all in the name of the only thing that matters to him: winning.

That toughness comes in part from growing up in the cold and desolation of North Dakota, and in part from his football days in high school and at the University of Nebraska. It also comes from his selfless approach. When once compared to Kirk Gibson in style and background, Erstad would hear nothing of it, saying that Gibson was an All-America wide receiver and "I was a punter.''

Maybe. But the Angels never punt with Erstad in charge.


Julio Franco, Mets
He will be going back to the playoffs again this year, and that is no coincidence. Franco has become a team leader in so many ways, none more important than the way he takes care of himself, be it bringing his own healthy food to the ballpark or waking up at 3 a.m. to drink a protein shake or getting his sleep -- even if it's a nap on the couch in the clubhouse before the game.

He sets an example every time he takes off his shirt -- has there ever been a 47-year-old built like this guy? -- and every time he rifles a line drive to right field off a pitcher who wasn't even born when he made his big league debut way back in 1982. Franco wasn't always this dedicated; as a young man, he thrived through great ability.

He tells and shows his teammates about the right and wrong ways to do things. He does all the right things now. And when the Mets need a big hit late in a game in October, the first guy manager Willie Randolph will choose is the guy who has been known to take batting practice with a weighted donut on his bat: Julio Franco, the guy who has seen it all.


Mike Matheny, Giants
To understand who Matheny is, all you have to do is watch him in the bullpen before the start of a game: He is on his knees, all alone, practicing blocking imaginary pitches in the dirt. Most catchers never practice that; Matheny still does it at age 35. No one blocks a ball better than he does, no one calls a better game than he does and no one goes to the mound and calms down -- or jacks up -- a pitcher better than Matheny.

He's not much of a hitter, but he's one of the few guys in the game who will shorten his swing and try to put the ball in play, especially with two strikes and especially with men in scoring position. He was taught well by his coach at the University of Michigan, Bill Freehan, one of the most underrated catchers of all time.

Matheny also was taught well by his father. Several years ago, when Matheny signed his first significant, long-term contract as a major leaguer, his present to his father was the opportunity to retire and to stop working so hard. But the son continues to outwork just about everyone in the game.


Mark DeRosa, Rangers
Texas manager Buck Showalter calls DeRosa "an irregular regular,'' meaning a guy who plays every day but rarely at the same position. One day it's second base, the next day right field, the next day third base, and never with a complaint. And wherever he has played this year, he has hit.

It is so rare for a player, at age 31, to change his hitting approach after watching a teammate, but that is what DeRosa has done after seeing the success of Rangers shortstop Michael Young, a hitting machine. Showalter loves DeRosa because he's so smart -- he went to the University of Pennsylvania -- and because of his competitive nature, including his football background. DeRosa played quarterback at Penn after an amazingly successful high school football career in New Jersey.

That's what we call "a winner,'' and you can never have enough winners on a major league team.