On the eve of the 1982 World Series, Cardinals closer Bruce Sutter was explaining to a young writer his signature pitch, the split-fingered fastball.

"How do you throw that?'' the writer asked, marveling at the way Sutter controlled a pitch that he threw by jamming a baseball between the index and middle finger. "Look at my fingers!'' Sutter said, his right hand several feet from his face. "Look how long they are! I can pick my nose from here.''

It was those fingers, and that pitch, that helped Sutter amass 300 saves, win a Cy Young Award, a World Series championship and gain eventual enshrinement in the Hall of Fame. His success, and that pitch, inspired a generation of pitchers to try it, including Roger Clemens. The split helped transform Clemens from a great pitcher to the greatest living pitcher.

Sutter didn't invent the split-fingered fastball, but he perfected it and glamorized it. He made it his primary pitch, not just an offspeed pitch that he threw occasionally. And it all started in minor league spring training in 1974, when Sutter, then a starting pitcher with an 88 mph fastball, was told by Fred Martin, the Cubs minor league pitching instructor, to try a new grip. Sutter was open to the suggestion because he recently had ulnar nerve surgery -- he didn't even tell the team about it -- and the scar on his right elbow was still purple. 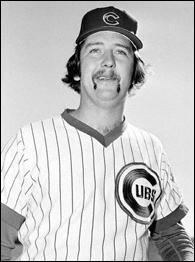 "They were going to release Bruce that spring, and Fred said, 'No, no, no, give him until June,''' said Giants broadcaster Mike Krukow, a pitcher in the Cubs' system at that time. "Fred taught that pitch to all of us, but I couldn't throw it, I didn't have the [finger] spread for it. But Bruce's fingers were so long and he had such a wide spread. He went to Key West [Double-A ball] that year and was unbelievable, he averaged about two strikeouts per inning. He threw that thing all the time. As soon as I saw him throw it, I knew he was going to the big leagues. Everyone wanted to throw it after he did. Everyone wanted to talk to him about it. He was the magician. He was throwing something no one had ever seen.''

There had been variations, of course, but Sutter's splitter was different than a forkball because the ball came out of his hand with a spinning action, just like a fastball. A forkball comes tumbling out of a pitcher's hand, and hitters could tell that it wasn't a fastball.

"We had seen the spitball, which acted a lot like the splitter,'' said Cubs current hitting coach Gary Matthews, who faced Sutter many times in his prime. "It acted like a forkball. We had seen that before. Back then, [Mets left-hander] Jerry Koosman was throwing a cutter, but we didn't call it that. But Bruce's ball just disappeared. With his arm motion, and with the movement of the ball, it was really hard to see, like Trevor Hoffman's changeup.''

Sutter used the split all the time because his fastball wasn't a dominant pitch.

"After he threw it, his fastball looked like it was coming 100 mph,'' Matthews said. "He could throw it for a ball, he could throw it for a strike. It was such a devastating pitch. If you stayed off of it, he'd get a called strike. If you swung, you would miss. He perfected something, [it was] something new on the scene. Clemens throws his split up here -- high -- but Bruce's was lower. It broke in different ways. And his arm speed was the same as his fastball.''

"Bruce wasn't the only one throwing that pitch,'' Baker said. "Diego Segui threw it back then. The terminology is different [now]. When we were kids, the curveball was a drop ball. In the Negro Leagues, the slider was the out-shoot, the sinker was the in-shoot. It's damn near impossible to do something with the ball that no one has ever done. Bruce was very smart. He understood pitching. He had great command of the bottom of the strike zone. He could mask each pitch to make it look like the other. If you looked for the split, he could throw the fastball by you.''

His ability to throw the splitter so well was due in part, Krukow said, "to Bruce being so good at motor skills. He was great in darts, pool, shooting hoops. There wasn't much he couldn't do.''

"A lot of guys tried to throw [the split-fingered fastball], but no one threw it better than Bruce. No one."
-- Giants broadcaster and former
pitcher Mike Krukow

In many ways, Sutter was way ahead of the curve when it came to closers. In each of his 10 full seasons, he pitched more than 80 innings; Dennis Eckersley, a deserving, first-ballot Hall of Famer, never pitched more than 80 innings in any of his 10 years as a closer. Sutter pitched over 100 innings in a season five times, topping out with 122 2/3 innings in 1984. He was wracking up 30-save seasons when it really meant something. He finished with 300 saves, presently 20th most of all time, but when the save criteria is stiffened -- four-out saves, or the pitcher entering the game with the tying run on base or at the plate -- Sutter has the fifth most saves with 248. No matter the criteria, he was one of the best ever.

"Herman Franks was our manager in Chicago,'' Krukow said. "He told all the starting pitchers, Rick Reuschel, Ray Burris, Bill Bonham, to just get us through the fifth inning. Sutter can do the rest. He always took the ball. He never said no. In 1979, the year he won the Cy Young, he had a knot in his shoulder the size of a softball, but he kept pitching.''

There was a lot that made Bruce Sutter a Hall of Famer. But mostly, it was the split-fingered fastball.

"If it wasn't for that pitch, Bruce Sutter would be tending bar in Mount Joy, Pa.,'' Krukow said. "A lot of guys tried to throw that pitch, but no one threw it better than Bruce. No one.''