The Arizona Diamondbacks made a solid baseball decision Tuesday when they kicked Russ Ortiz to the curb -- but contrary to what you'll read about this almost anywhere you look, they won't be "eating" $22 million of his salary (which appears to be a new record for the highest dollar amount owed to a player who's been let go). They won't be eating one cent, because the money was already gone. The Diamondbacks ate that money the moment the ink dried on Ortiz's laughingstock of a contract. 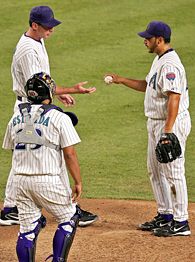 Here's a snapshot of the Diamondbacks' committed payroll expenses for 2007, as of Tuesday morning:

And here's how it looks Wednesday:

From a financial standpoint, nothing has changed. The D-Backs were going to pay Ortiz his money whether he was on the club or not. The economic term for this is a "sunk" cost: Whether you use the player/item/service or not, you've committed already to the expense.

The decision of whether or not to use the player or product or service is independent of the money committed, because it's already spent. You often see the misunderstanding of sunk costs from people who sign a multi-year contract to use a fitness club, then drag themselves to the gym because they're spending the money anyway -- when the truth is that the money is gone even if they never set foot on a treadmill. The go/no-go decision should have nothing to do with the expense.

Arizona's Ortiz decision is just another go/no-go choice: Since the money was wasted already, was the team better off with Ortiz on the roster or not? Clearly, at this point, the Snakes were far better off without Ortiz. He is no better than replacement level when he makes it on to the field -- which isn't often -- and had drifted further into flyball-pitcher territory even as he moved into the most homer-friendly park of his career in Arizona. Dustin Nippert might not be fully ready for the big leagues, but he's going to do more to keep Arizona in contention than Ortiz is.