Would Hank Aaron hit as many home runs if he played today? Would Barry Bonds be as great if he played in past eras?

The ball today is livelier and many of the big, old stadiums -- like in Cincinnati, San Francisco, Houston, Pittsburgh, Milwaukee and San Diego -- have been replaced by smaller, more intimate ballparks. Also, due to expansion, the pitching isn't as good overall as it was a generation ago. So bigger numbers are easier to attain today. 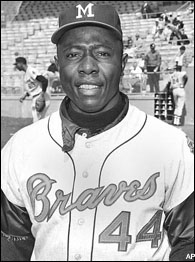 One of the newest ballparks is Citizens Bank Park in Philadelphia, and players call it "Williamsport" -- because balls fly out of there like it's a Little League field (Williamsport, Pa. is the site of the Little League World Series).

Usually we focus on the increase of home runs as evidence of the impact of the livelier ball and smaller ballparks. But bigger numbers have also come in the RBI department.

For instance, it's just early September, and already 19 batters in the major leagues have 100-plus RBI. In 1976, when I won my second National League MVP award, only seven major-league batters drove in 100 runs. My teammate, George Foster, led the majors with 121 RBI and I was second with 111. The designated hitter also leads to more RBI in the AL than in the NL (of the 19 batters currently with 100 RBI, 14 are in the AL).

There was a time when 105 or 110 RBI was a great season. Today, that isn't the case. But even with the single-season increase in RBI, one record that I believe will stand for a long time is Aaron's career RBI record (2,297). Bonds is the closest active player (1,835).

Granted, part of the reason for the offensive trend of the past decade is that there are more great hitters today than ever before. Players today are bigger, stronger and often faster than in the past. They're far more athletic, which helps them defensively as well. I watch defensive plays made now that you wouldn't have thought possible before. The plays seen every day on Baseball Tonight's Web Gems segment are mind-boggling.

Another factor in the increased offense is that video technology today helps hitters much more than pitchers.

Derek Jeter told me that he can pop up in the first inning, and before he bats again, he can look at video of the sequence of pitches in his first at-bat to see what he did wrong or what the pitcher did to get him out. That way, he can make better adjustments from at-bat to at-bat. Before video was available, a hitter might go several games before realizing he was, say, dropping his hands too quickly.

I sat in the video room with Luis Gonzalez one day while he was viewing video of Jason Schmidt, who was scheduled to pitch that night. Gonzalez could see Schmidt's arm slot on the changeup, curveball, fastball, etc. When a hitter can see that over and over on video, he can pick it up better in the batter's box. While pitchers can benefit some from video, it especially helps hitters.

To summarize: Today's great players would be great in any era. But I also believe that Babe Ruth would be great if he played today and maybe even hit more home runs (remember, he played with a less lively baseball).

So I don't want to take anything away from today's players. And I also want to be clear that if Barry Bonds, Hank Aaron, Babe Ruth and Willie Mays all played in the same era, they would all be great players. The numbers would be different, depending on the era, but they would still dominate that era.

Statistics are not my only criteria for evaluating a player, though. I grade a player on intangibles like his overall ability to help his team. And we can't compare statistics across different eras anymore. At one time, Roger Maris' 61 homers was the single-season standard. Now, with the smaller parks and livelier ball, the new standard is Bonds' 73.

I said earlier that Bonds' home-run numbers probably would be lower in another era, but let's revisit that ... because he actually might be the exception, since opposing teams of the past would pitch to him more.

In Hank Aaron's era, pitching to hitters was a matter of pride and competition. No matter how many home runs Aaron hit, he wasn't walked every time runners were in scoring position and first base was open.

Managers have gone way too far with Bonds. They rationalize that they're trying to win the game, but that's the easy way out. Bonds doesn't hit a home run on every swing. Teams have walked him leading off an inning in a tie game, despite the frequency with which the leadoff batter scores after getting on base.

I've seen several games this year when the San Francisco Giants were in a tie game in the late innings, Bonds was walked intentionally to lead off, and he then scored the winning run.

While the numbers of most hitters today would decrease because of the larger parks and less lively baseball, Bonds' numbers might be equal to his numbers today if he played in a past era because he'd get more at-bats.

Forfeit Follies
I was supposed to broadcast the New York Yankees-Tampa Bay Devil Rays game scheduled for Monday afternoon that caused a controversy this week.

I heard sound bites from the Yankees, including GM Brian Cashman, who said that the Devil Rays should have departed for New York on Friday and should forfeit the game. Since then, MLB rescheduled the missed game for Wednesday (making for a doubleheader), and the Yankees have dropped their forfeit request.

Normally, a rule is cut-and-dry, and the Devil Rays would have to forfeit the game. The Yankees technically have a case, but since Hurricane Frances is clearly an extenuating circumstance, I don't see how they could ask for a forfeit. The hurricane was bombarding Florida, and Devil Rays players have families and friends and homes there.

There comes a time when sports has to take a back seat to real life, and this was one of those cases. After 9/11, the Yankees should understand the impact a tragedy can have on a community.

The Devil Rays were heading on a two-week road trip. What if they had left home early and then something happened to a family member while they were in New York? Think about the effect that could have had on the children of those players. How would they have felt about and viewed their dads?

The more you look at it, the more you realize that this rare occurrence should be treated just like a rainout. There were lots of rumors at Yankee Stadium on Monday about which official told what to whom, but none of that matters. It wouldn't have been fair to the Boston Red Sox to give the Yankees a free game.

We can't control a hurricane, but we can control how we deal with it. The Devil Rays dealt with it the right way.

An analyst for ESPN's Sunday Night Baseball, Hall of Fame second baseman Joe Morgan won back-to-back MVP awards with the Reds in 1975 and '76 (the Reds won the World Series both years).