The Giants without Barry Bonds?

It's not exactly the Yankees without Mickey Mantle, or the Orioles without Cal Ripken. After all, Barry Bonds has been a Giant for only 11 seasons. He does hold the San Francisco Giants' franchise record with 478 home runs, but remains comfortably behind Willie Mays and Willie McCovey in most of the important batting categories (and with 249 steals, Barry's still 14 behind his father for the No. 1 spot on that list).

On the other hand, when Mantle and Ripken retired, they were but shadows of their former selves, and their teams were barely competitive. 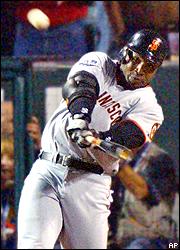 And that's not Barry Bonds or his Giants. Even at 39, Bonds remains at very nearly the height of his powers, and the Giants are heading to the postseason for the third time in four seasons.

On a positive note, if Bonds were to quit -- and not many think that he actually will -- the Giants would save somewhere in the neighborhood of $20 million: $16 million in salary, and the remaining $4 million of a $10 million signing bonus.

Can you think of a general manager who wouldn't like to have $20 million to play with? I can't.

Can you think of a general manager who wouldn't shudder at the thought of losing a player like Barry Bonds? I can't.

But if you have to replace the greatest player of his time, that $20 million gives you a pretty good head start.

Here's how the Giants' lineup looks for next season, without Bonds. For each position at which a current player is under conract for 2004, I'll list the final year of his contract. For each position at which the Giants don't have a projected everyday player under contract, I'll list the incumbent in parentheses so we know who they have to replace.


Of course, it's never quite so simple as that. J.T. Snow's contract actually includes a club option for 2004; they can bring him back next season, but they'll have to pay him $6.5 million (and he's actually been outplayed this season by Andres Galarraga). Jose Cruz and the Giants have a "mutual option" for 2004, which means that if they're both happy he'll probably be back.

Considering that GM Brian Sabean generally likes the players that he has -- that's why he got them in the first place -- there's a good chance that both Cruz and Snow (and probably even Galarraga, who turns 43 next June) will return.

That leaves three holes in the lineup: catcher, shortstop, and (of course) left field.

But wait, again it's not that simple, because the Giants have a couple of key pitchers in the last years of their contracts, too; Sidney Ponson and Tim Worrell both have the right to play elsewhere in 2004. Ponson's going to get a big contract wherever he goes, and Worrell, after ably filling in as the Giants' closer, might be able to get closer money when he signs his next deal.

By my count, the Giants have approximately $55 million committed to contracts in 2004, assuming that 1) Bonds retires, 2) the Giants pick up their option on Snow's contract, and 3) the Giants and Cruz still like each other this winter.