Sunday, Bob Klapisch reported, at NorthJersey.com, that the Royals had signed Juan Gonzalez to a one-year contract, which got the Royals fan in me pretty excited. Klapisch wrote, "The Royals, already on their way to becoming the AL Central's strongest team, further strengthened themselves Saturday ..."

Unfortunately, it seems that Klapisch was just teasing us; today, it's widely reported that the Royals are in the running for Gonzalez and might even be the front-runners, but a couple of other teams are involved, too.

However, let's assume for a moment that the Royals really do sign Gonzalez. I'm not sure what "on their way" means, but there's absolutely no question that they're stronger with Gonzalez than without. But how much stronger? Are they really the Central's strongest team? 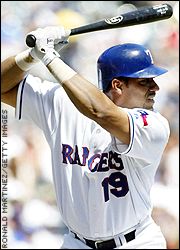 This offseason, the Royals have lost one good hitter (Raul Ibanez), but presumably gain two (Gonzalez and Matt Stairs). In 2003, Ibanez played left field and posted a 799 OPS (which actually isn't all that good, considering he played half his games in the AL's hitter-friendliest park). Gonzalez posted a 901 OPS, Stairs 950. Stairs was a bit over his head, Gonzalez wasn't.

Gonzalez (theoretically) replaces the at-bats vacated by Ibanez, and Stairs will presumably take over a good percentage of the at-bats that were horribly wasted last season by Ken Harvey, who couldn't hit right-handed pitching to save his life (but was potent against lefties).

Oh, and I almost forgot ... Benito Santiago is taking over for Brent Mayne behind the plate. Normally, I wouldn't get all that excited about a 39-year-old catcher, but Mayne's no kid himself and has been uniformly awful at the plate in each of the last two seasons.

Summing up, the Royals figure to be significantly better at three positions (right field, DH, and catcher), steady at four positions (first base, second base, shortstop, third base, and center field), and marginally worse at one position (left field, with Aaron Guiel shifting from right). The x-factor is injuries, as both Gonzalez and Mike Sweeney have recently had problems staying in the lineup. Neither is likely to play 150 games, but each is likely to play more than he played last season.

Another x-factor is Carlos Beltran, who seems primed for one of the greatest all-around seasons in franchise history. Don't be surprised if he hits 25 homers, steals 40 bases and wins a Gold Glove (and he'd hit 30 homers if the Royals hadn't moved the fences back this winter).

The Royals, in fact, ranked fourth in the American League last season with 836 runs. They scored more runs than the Twins, and also the Rangers and the White Sox and the Mariners and the Athletics. A lot of general managers would be quite content with an offense that scored that many runs, and focus instead on improving the pitching staff, which in this case was among the worst in the majors.

But GM Allard Baird is too smart for that (and if you've been reading this column for a few years, you're as shocked to read this sentence as I am to write it). Baird apparently knows at least one, and perhaps three, important things about those 836 runs ...

1. The total was greatly inflated by Kauffman Stadium. While the Royals also rank fourth in road scoring, it's a very near thing; they're nearly as close to ninth place as third place.