The Office of the Commissioner has now existed for nearly 85 years, and yet there have been only nine of them. Here's an overview, focusing on their impact on the game ...

Kenesaw Mountain Landis (1920-1944)
Described by one writer as "flinty, colorful, and often arbitrary," Landis was baseball's first commissioner and still, by almost any measure, its greatest.

In 1891, when still a young man, Landis earned a law degree from Chicago's Union Law School. Before long, thanks largely to political connections -- two of Landis' brothers were Indiana congressmen -- he won an appointment as a federal judge, and quickly became known for his "quirky and newsworthy justice" (granted, many of his better-known decisions were overturned by higher courts). In 1914, the Federal League challenged the National and American Leagues on the field, and also in the courts, arguing that the "reserve clause" -- which essentially bound National and American League players to their employers forever -- was illegal. Landis heard the case ... and did nothing while the Federal League eventually went under.

This made Landis some big friends in high baseball places. And in 1920, when the Lords of Baseball were desperate to restore public confidence in the sport in the wake of the Black Sox scandal, they turned to Landis to lead a new three-member "Board of Control." Landis demanded "absolute power," and he got something very close to that.

Among Landis' first acts was his most famous; in the summer of 1921, though none of the Black Sox were convicted of any crime, Landis suspended them forever, saying, "Regardless of the outcome of juries, no player that throws a ball game, no player that entertains proposals or promises to throw a game, no player that sits in a conference with a bunch of crooked players where the ways and means of throwing games are discussed, and does not promptly tell his club about it, will ever again play professional baseball."

With that single decision, Landis might have done more for the sport than anyone else, ever. Certainly, Landis never did anything more important. He did, in the 1930s, "free" a number of minor leaguers in his efforts to prevent major-league teams from establishing their own farm systems. It was a noble effort in a good cause, but it was also doomed to fail.

Landis has been blamed for delaying the integration of the major leagues, but the truth is that the owners didn't want black players in the majors any more than Landis did. And it's not likely that, even if Landis hadn't died in 1944, he could have prevented Branch Rickey from bringing Jackie Robinson to the National League in 1947.

Happy Chandler (1945-1951)
Chandler, a governor of Kentucky and then a U.S. senator, impressed the Lords during World War II with his public pronouncements about the relationship between baseball and American society. With Landis' death in 1944, the owners needed a new commissioner, and Chandler happily accepted the job (and resigned his Senate seat).

In 1947, Chandler suspended Dodgers manager Leo Durocher because of his alleged ties to various shady characters. That same spring, Chandler had to deal with the controversy surrounding Jackie Robinson's promotion to the Dodgers, which was opposed by nearly every owner and by a number of ballplayers. Chandler later took some credit for smoothing the way, but aside from his account there's little evidence for that. As Jules Tygiel wrote in Baseball's Great Experiment: Jackie Robinson and His Legacy, "At best, one can describe Chandler's role as endorsement by abstinence. Chandler's own claims to posterity notwithstanding, he appears as no more than a bit player in these historic events."

Perhaps the smartest thing Chandler ever said was this, in 1951: "The owners don't want a real commissioner." That same year, he resigned after his bosses refused to give him a contract extension, and later served again as governor of Kentucky.

Ford Frick (1951-1965)
Once a sportswriter, Frick took over as president of the National League in 1935 (when that position really meant something), and held the job until taking over as commissioner in 1951. In 1947, while Chandler was sitting on his hands, Frick supposedly told the Cardinals players who threatened a strike if Jackie Robinson were allowed to play, "If you strike, you're through. I don't care if it wrecks the league for 10 years." The rebellious Redbirds backed down.

In fairness, it should be noted that Frick, as commissioner, never had a chance like that again. But he also avoided making decisions whenever possible. To this day, when old-timers talk about Frick's tenure they can't help but remember his standard reaction to various disputes: "That is a league matter."

So Frick didn't do much, the notable exception being in 1961, when Roger Maris threatened Babe Ruth's single-season record for home runs. Frick had once served as Ruth's favorite ghostwriter, so this time he did something, famously calling for an "asterisk" to be placed next to Maris' name in the record books, because Maris achieved his feat in a 162-game season, as opposed to Ruth's 154-game season. Not as famously, the asterisk never actually appeared (instead, both records were listed, with notations about the season lengths).

Gen. William D. Eckert (1965-1969)
"Spike" Eckert, a retired army general, made only one significant ruling, but it's one that significantly changed the course of at least one franchise's history.

Of course, this made Seaver a man without a team, so Eckert made another ruling: any team willing to match Atlanta's offer would have an equal shot at Seaver. Three teams -- the Phillies, Indians, and Mets -- entered the derby. And on April 3, Eckert reached into a hat and plucked out a piece of paper that read NEW YORK METS. Seaver pitched a six-hitter in his first minor-league game, won a spot on the major league roster the next spring, and of course the rest is history.

This was shortly into Eckert's term as commissioner, and after the Seaver case had been resolved The Sporting News editorialized,

We think you'll be seeing Eckert take positive action in other matters as he gets the feel of his job.

Writers who greeted his appointment with wisecracks about "the unknown soldier" are changing their tune. They've seen him in the Florida camps, and they are revising their estimates of the man who became a three-star general at the age of 51.

Eckert has yet to hit a home run as commissioner, but he has not struck out, either.

This was probably the nicest thing anybody every wrote about Eckert's tenure. Late in 1968, with labor problems on the horizon, the owners asked Eckert to resign. In the three years since the Seaver case, Eckert had not done -- or not been allowed to do anything -- that's still remembered. With each passing year "the unknown soldier" becomes more unknown. 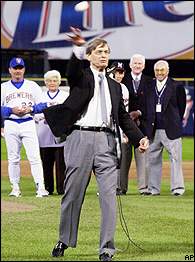 Bowie Kuhn (1969-1984)
Just as Ford Frick became identified with a phrase that justified passivity, Kuhn became identified with a phrase that justified activity: "in the best interests of the game." Using that rationale, Kuhn banned Mickey Mantle and Willie Mays (!) because they worked as greeters at casinos (?), and he voided mid-1970s deals that sent various Oakland superstars to rich teams in exchange for huge (for the time) sums of money.

Kuhn wasn't particularly a friend of the players, and is often remembered now as simply a tool of the owners. It's true, the owners did pay his salary. But Kuhn frequently clashed with A's owner Charlie Finley, and he suspended both George Steinbrenner (who pled guilty to illegal campaign contributions) and Ted Turner (who tampered with potential free agent Gary Matthews).

Baseball's first two strikes came during Kuhn's tenure, in 1972 and 1981, and he might fairly be criticized for failing to effectively guide the owners in their dealings with Players Association head Marvin Miller. Kuhn is also remembered for allowing postseason games to be played at night, and he stubbornly refused to wear a coat when attending those games, no matter how frigid the temperature. In the end, nobody really liked Kuhn ... which might mean he was doing his job about as well as a commissioner of his era could.

Peter Ueberroth (1984-1989)
Ueberroth was a money man, so it's appropriate, when discussing his tenure as commissioner, to list two figures: $280 million, and $1.5 billion.

In the winters following the 1986 and '87 seasons, there were surprisingly few offers made to free-agent players. Eventually the surprise was explained: with the encouragement of Ueberroth, the owners simply agreed that they wouldn't sign free agents. This was clearly a violation of the Collective Bargaining Agreement that governed the relationship between the owners and the players, and eventually the owners were forced to pay $280 million to the players who had been free agents during the off-seasons in question (and if the owners ever get caught doing the same thing, they'll have to pay triple damages).

On a happier note, no commissioner before Ueberroth, in any sport, had been quite so accomplished at shaking the money tree (and playing the PR game; Ueberroth lifted Kuhn's suspensions of Mantle and Mays). Under Ueberroth, Major League Baseball greatly increased the number of corporate sponsorships, and licensing monies also grew beyond any owner's happiest imagination. Most significantly, Ueberroth brokered a pair of gigantic four-year TV contracts, one with CBS and the other with ESPN, which together added nearly $1.5 billion to the owners' coffers.

Bart Giamatti (1989)
Giamatti's tenure as commissioner lasted exactly 154 days, but if you ask a typical baseball fan to name three commissioners, there's a pretty good chance Giamatti will take one of those three spots.

Before Giamatti replaced Ueberroth as commissioner, he served for a few years as president of the National League. In 1988, Reds manager Pete Rose got into a shoving match with umpire Dave Pallone, and Giamatti suspended Rose for 30 days. It was the longest suspension of a manager since Chandler suspended Durocher. Later, unfortunately, Rose came into Giamatti's life again.

Ueberroth, when still commissioner, had learned that Rose was associating with bookies and might have bet large sums of money on baseball games. It was Ueberroth who hired attorney John Dowd to investigate Rose, but Giamatti -- as National League president and Ueberroth's anointed successor -- was involved in every step of the process. On May 9, 1989, Dowd submitted his report to Giamatti, who by then had replaced Ueberroth.

Due to various gaffes by nearly all parties involved, Giamatti couldn't explicitly suspend Rose for gambling. In the end, Rose signed an agreement that stipulated his permanent suspension from Organized Baseball, but did include the clause, "Nothing in this agreement shall be deemed either an admission or a denial by Peter Edward Rose ..."

Nevertheless, Giamatti, answering a question from the media, said, "... I have concluded that (Rose) bet on baseball."

Exactly one week after announcing the Rose decision, Giamatti suffered a massive heart attack and died.

Fay Vincent (1989-1992)
Upon taking over as commissioner, Giamatti had created the post of Deputy Commissioner for his best friend, Vincent. With Giamatti's unexpected death, Vincent was immediately named commissioner.

Vincent, though his impact on the sport was not particularly significant, will likely be remembered as the last commissioner who wasn't completely in the pockets of the owners. For that alone, we should remember him fondly.

Bud Selig (1992-????)
With the possible exception of Landis, no other commissioner has made a larger mark on the game than Selig, and nobody has been more of an activist. Under Selig's watch, Major League Baseball has: