As I'm sure I've mentioned two or a hundred times, I do a lot of radio spots (or "hits," as we seasoned professionals call them). And one of the questions I've been asked a few times in recent days is, "Where's the hype over Barry Bonds catching Willie Mays on the home-run list?" 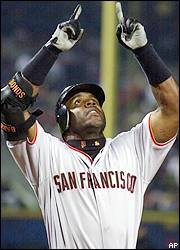 Without checking, I would strongly suspect that those were not big national stories. Stories, yes. But not big stories, because the prize has always been first place, either in the majors or (when the leagues were actually separate entities) in the league.

I don't mean to belittle Bonds' accomplishment, and I've been following his every swing on TV, too. It's a big story, and all the more so because of whom he has tied. But this quest for third place certainly does not suffer from a lack of attention, and I'll be glad when Bonds has No. 3 all to himself, and we can simmer until next spring, when Bonds gets the Babe in his sights.

By the way, did you know that Bonds already passed Ruth in one important statistic? It happened last September. On the 14th, Bonds pinch-hit for Jeffrey Hammonds in the eighth inning and, facing Milwaukee's Mike Crudale, Bonds drew the 2,062nd walk of his career, tying him with Babe Ruth for No. 2 on the all-time list. On the 15th, Bonds passed Ruth with a sixth-inning intentional walk, issued by San Diego's Brandon Villafuerte.

Bonds finished 2003 with 2,070 walks, and has added seven this season, leaving him 113 short of Rickey Henderson, who finished his 2003 season -- and presumably his career -- with 2,190 walks. Considering that Bonds has averaged 173 walks per season over the last three seasons, absent injury he's almost certainly going to break the record in 2004.

Think anybody will notice? Probably not any more than anybody noticed on April 25, 2001, when Henderson broke Ruth's record. Or any more than anybody noticed on October 4, 2001, when Henderson homered to tie (or break, depending on which source you believe) Ty Cobb's all-time record for runs scored. Henderson broke his own record many times, the last time on Sept. 19, 2003. In the Dodgers' 6-4 loss to the Giants, Henderson pinch-hit for Guillermo Mota and was plunked by Jason Christiansen. He moved to second on Dave Roberts' bunt, held his base when Paul Lo Duca grounded out, and sprinted home when Shawn Green singled to center field. Henderson didn't play another game, and so he didn't score another run.

And Henderson's runs record, as opposed to Aaron's home-run record, looks fairly safe for now. Barry's still roughly 350 runs behind Rickey, and lately he has been averaging roughly 115 per season. Bonds turns 40 this summer, and I would rate his chance of catching Henderson at somewhere well south of 50/50.