Leo Mazzone faced a big challenge last year. After 11 straight seasons of coaching the best pitchers in the National League, Mazzone faced the loss of Tom Glavine, the aging of Greg Maddux, and the arrival of Mike Hampton, whose career was on the verge of a nervous breakdown. So what happened? The Braves dropped from No. 1 to No. 9 in the National League ERA rankings, but newcomer Russ Ortiz won 21 games and Hampton showed real signs of recovery.

This year brings new challenges. Ortiz and Hampton are back, but Maddux is gone and Mazzone is working with a rotation that includes John Thomson, Horacio Ramirez, and reclamation project Jaret Wright. If Mazzone can keep this staff's head above water, he'll further cement his reputation as the greatest pitching coach of this era. But what will that get him, aside from a glowing tribute in Greg Maddux's autobiography? I would argue that it's time to start thinking about pitching coaches as Hall of Famers. 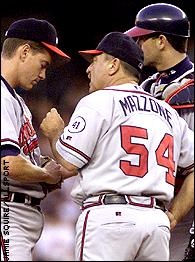 What might qualify a pitching coach for the Hall of Fame? Our only point of comparison is Hall of Fame managers. There are 16 of them, and they're not easy to categorize. It helps to have a winning record, of course (but two of them don't). It helps to win World Series, of course (but two of the 20th-century managers didn't). But all 16 of them did win at least two league championships, and all 16 of them managed at least 16 seasons.

Billy Southworth, for example, has an impeccable record. But he managed only 13 seasons, and that's probably why he's not in the Hall of Fame.

I was somewhat surprised to find how many pitching coaches have played that role for more than 15 seasons: by my count -- and I suspect I missed a few -- there have been roughly 20.

Near as I can tell, the all-time record for number of years as a major-league pitching coach is held by ... (you're going to be surprised) ... a fellow named Galen Cisco. He's no stranger to baseball fans, as he served as Phillies pitching coach as recently as 2000. But did you know that his career as a pitching coach lasted 28 seasons, longer than the managerial careers of all but three Hall of Fame managers? Cisco was a pitching coach longer than Casey Stengel, Sparky Anderson, and Leo Durocher (to name just a few) were managers.

Is Cisco Cooperstown material? Even if there were a push to elect a pitching coach, Cisco wouldn't be at the top of many ballots. Over the course of his career, Cisco's pitching staffs were roughly two percent better than league average (after adjusting for the ballparks; this Adjusted ERA is taken from the just-published Baseball Encyclopedia). Two percent is actually pretty good, especially when you consider that his long career includes a decline phase -- yes, coaches have them, too -- and if we just junk Cisco's last five seasons, mostly with the Phillies, his career Adjusted ERA would be roughly four percent better than league average.

More damning (and you can take this for what it's worth), in 28 seasons Cisco coached only eight pitchers who won 19 or more games in a season. He just didn't coach many big winners.

Ernie Harwell: I would not want a pitching coach in the Hall of Fame; there are too many categories already. Also, most coaches can enter either as player or manager. If I picked any pitching coach for the Hall, I would select Johnny Sain and Roger Craig. Both were great on mechanics and also psychology.

In his recent autobiography, Kaat wrote, "Johnny's strength was showing you how to make the ball move and boosting your confidence. You might have a mediocre curveball and he'd make you believe it was as good as Koufax's. He preached that a pitcher has the advantage: he has the ball. Nobody knows what he's going to throw. Look at Sain's track record, at all the 20-game winners he coached ..."

Care to guess who ranks as perhaps Sain's greatest student? No, it wasn't a pitcher. It was a young minor-league pitching coach named Leo Mazzone. In Pitching Like a Pro, Mazzone wrote, "I came under [Sain's] wing in 1979; we stayed together in spring training and would go over to his trailer and talk for hours about pitching ... I listened and learned from Sain -- he was my guru when it came to understanding the nature of pitching and formulating pitching programs that would enhance performance and protect arms from injuries."

Now, let's run Sain and Mazzone, the two most famous pitching coaches ever, through the same numbers we looked at for Cisco ...

What's "Big"? For Sain, it's a pitcher winning 20 (or more) games. For Mazzone, it's a pitcher winning 18 (or more), simply because most of Sain's pitchers were working in four-man rotations, and so had many more chances to win 20 games. They're virtually even in those big seasons and also in years as pitching coach, but Mazzone owns a huge edge in Adjusted ERA. Even if we lop off the last five seasons of Sain's career (as we did for Cisco), his AERA goes up to just 107 (which, I should explain, means that his pitchers were seven percent better than league average). But that adjustment's not appropriate anyway, because removing five seasons would leave Sain with a 12-season career, not worthy of Hall of Fame consideration.

Hal McCoy: Pitching coaches are as much a part of baseball as managers. Guys like Dave Duncan and Leo Mazzone and even Don Gullett have been an integral part of the game and should be recognized. Should they be in the Hall of Fame? My answer is, "Why not?"


"Why not?" asks legendary Cincinnati baseball writer Hal McCoy. Well, let me play the Devil's advocate for a moment. One could reasonably argue that Leo Mazzone's Adjusted ERA is excellent not because Mazzone is a great pitching coach, but because John Schuerholz gave him great pitchers.

There's something to that argument, of course ... but why should we hold pitching coaches to a standard we don't hold managers to? Casey Stengel's winning percentage in the nine seasons he wasn't managing the Yankees was just .439, and that's not including his four seasons with the expansion Mets (with the Yankees, it was .623). There's never been a manager yet, with the possible exception of Billy Martin, who could turn a bad team into a good team. And I doubt if there's ever been a pitching coach who could turn a bad staff into a good one.

But it seems likely that the very best pitching coaches really do have a significant impact on their teams' fortunes. If they do, shouldn't they be considered for the Hall of Fame? If they are, then we've got to come up with a list of candidates. And without micro-examining the qualifications of all the long-term pitching coaches, it seems reasonable to start with Johnny Sain and his No. 1 pupil, Leo Mazzone. If not necessarily in that order.