The Red Sox have Curt Schilling now and for only the second time in the last 85 years, they may have a better starting rotation than the Yankees. Boston had Carl Mays, Sad Sam Jones, Bullet Joe Bush and Babe Ruth in 1918, and in the mid-80s, they had an edge over the Yankees with the Roger Clemens-Bruce Hurst group.

In the other years of this rivalry, starting pitching was always the Yankees' great advantage over Boston. No longer, perhaps. 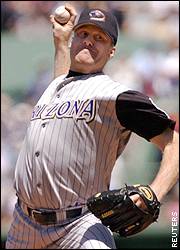 There are strings attached. Pedro Martinez is saying all the right things publicly and privately about Boston's pursuit of Schilling. But as he enters the last year of his contract and Schilling is flush with an extension that could run into 2007, it's possible -- maybe probable -- that he's going to complain about equal treatment. He might whine and gripe, and the Red Sox will be in a difficult situation: do they invest heavily in another older pitcher, at a time when Martinez's raw stuff, if not his competitiveness, appears to be in decline?

And while there is every indication that the 37-year-old Schilling will continue to pitch effectively, the reality is that very few power pitchers last until their 40th birthday. The best long-term hope for other teams in the American League East is that the Red Sox and Yankees continue to invest in players in their 30s.

But the Red Sox have adopted George Steinbrenner's win-now mantra as their own. The completion of this deal -- which is, incidentally, expected to lead to Arizona's acquisition of Milwaukee slugger Richie Sexson, for Red Sox left-handed pitching prospect Jorge De La Rosa and others -- is huge for the team, for the city, and for the Red Sox Nation.

Assuming that the Yankees sign Andy Pettitte, the left-hander will be a leader in the rotation that also includes Mike Mussina and a whole lot of question marks. Jon Lieber is coming back from injury after missing the entire 2003 season and may or may not help. Jose Contreras has proven he might be a good major-league pitcher. Jeff Weaver has a great arm, but might be finished emotionally in New York.

The Yankees might still augment this group by signing free agent Bartolo Colon or making a trade for Eric Milton. But no one available is Schilling. No one available has dominated three starts in a World Series, the way Schilling did in 2001.

Schilling will get $12 million for 2004, $12.5 million in 2005, $13 million in 2006 and if Schilling reaches some reachable incentives -- something in the range of 350 innings over two seasons -- he could make $13 million in 2007. No. 3 starter Derek Lowe has been among the league's best and most durable pitchers the last two seasons. Tim Wakefield, meanwhile, is a reliable and durable No. 4 starter.

The acquisition of Schilling could also do wonders for Martinez. For the first time since he joined the Red Sox, Martinez will not bear the whole burden of the team's postseason hopes. The Yankees could roll out Pettitte, Mussina, Clemens, David Wells, and because Boston could not match New York's depth, it was paramount that Martinez prevail. Now Martinez can line up as the No. 3 starter, behind Schilling and Lowe, and if he loses, the Red Sox can still win a series.

And Boston's rotation should be good enough for the Red Sox to save Martinez for October: Terry Francona, expected to be named Boston's next manager, can limit Martinez's innings through the summer, hold him to five-and-fly, and even skip him a few times, to reduce the strain on his shoulder. Martinez was so worn down this October that he had to pace himself through the early innings of postseason games.

The Red Sox figure to sign either Keith Foulke or Tom Gordon in the days to come, providing a closer to an already deep bullpen; the Yankees' middle relief is in a state of flux, once again.

Throughout the Yankees' dynasty of 1996-2001, they viewed the Red Sox and Baltimore Orioles as sleeping giants, dangerous franchises that were operated incompetently. But now the Red Sox are being run effectively, efficiently, and they are starting to win some of the battles the Yankees always won in past years. They'll have their next chance on the field in the 2004 season.