Questions of money are holding up the Mets' pursuit of Sammy Sosa. There is haggling to be done over his salary and Cliff Floyd's salary and Sosa's option year and union rules.

But the questions the Mets should be asking now are whether Sosa, at 36, would fit into their lineup (The answer is no); would be suited to play in Shea Stadium (no); could possibly develop into an enormous problem for new manager Willie Randolph (yes); and could be an utter disaster of Ed Whitson-like proportions playing in New York (yes). Questions about dollars and cents should be the least of the Mets' worries.

Sosa had a bad season in 2004 and still hit 35 homers in 126 games, and the image of Slammin' Sammy repeatedly hopping out of the batter's box in Queens is alluring. Omar Minaya, the Mets' new baseball honcho, has known Sosa since he was a teenager. But the Mets once had a hitter similar to what Sosa is now, at this stage in his career, and his name was Dave Kingman. He hit some home runs, racked up hundreds of strikeouts, and during his tenure the Mets stayed buried in the standings; you don't win with Dave Kingmans.

In 2001, when Sosa was 32 years old, he hit .328, with 64 homers, 116 walks and 153 strikeouts in 577 at-bats. He was such a good hitter that pitchers often worked around him, rather than trying to get him out by risking a breaking ball off the outside corner of the plate.

By last summer, however, Sosa's average had plummeted to .253, the third consecutive season of decline in his batting average. Pitchers no longer fear Sosa with runners on base; in fact, they can't wait to throw to him, because the potential for a rally-killing strikeout is enormous, and as Sosa remained entrenched far away from home plate, they spun breaking balls low and away repeatedly.

And Sosa swung and missed, repeatedly, reverting to the undisciplined style that plagued him as a young player. He had 133 whiffs in 478 at-bats, and his walks dropped to 56 -- or less than half of what he had in 2001. His batting average with runners in scoring position was .228, with 36 strikeouts in 125 at-bats. Twenty-three of his 35 homers came with the bases empty.

Barry Bonds has remained a great hitter into his 40s, in large part because of his plate discipline and his command of the strike zone. Even if Bonds' power had eroded in recent years, his walks and his batting average would have still remained high; he's always been a disciplined hitter. Sosa is not, never has been, and his problems at the plate will only grow more acute as he gets older.

A Mets lineup with Sosa would mean that four of the top six hitters in the lineup may well include Jose Reyes, Kazuo Matsui, Sosa and Mike Cameron -- four players who combined for 404 strikeouts in 1,651 at-bats in 2004, or about one for every four at-bats. And those four players combined for 158 walks. You might beat up Colorado's No. 4 starter with that kind of lineup, but you cannot possibly beat good pitching with that many strikeouts; the Mets saw this in 2002.

Sosa is a subpar outfielder, and Shea's larger outfield would expose his lack of range to a greater degree than Wrigley ever did. And the Mets, who are trying to rebuild their pitching staff by retaining Kris Benson, need to get back to being a pitching-and-defense kind of team -- as they were in '99 and '00. Their problems in recent seasons are rooted in their acquisitions of defensively challenged players like Mo Vaughn and Matsui, and their inability to identify a suitable position for Mike Piazza. 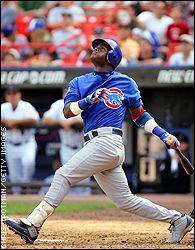 In the last couple of seasons, the Mets learned how an aging star can be problematic. Piazza never openly warred with the Mets over a shift to first base, but he didn't exactly embrace the notion, either, and as they worked around his ego, the situation remained unresolved. Sosa, in comparison to Piazza, has acted like a flagrant diva -- battling with Dusty Baker, a chronic players' manager, complaining about being dropped from fourth to sixth in the lineup.

A first-year manager like Randolph could use an influx of strong team guys, as Robin Ventura or Luis Sojo were for the Mets and Yankees in recent years. Instead, the Mets seem like they are ready to dump Sosa and all of his baggage on Randolph, at a time when Randolph will have enough challenges, such as cultivating a relationship with pitching coach Rick Peterson (the most important issue the Mets will have in 2005), navigating around the Piazza question (if he's not traded) and learning to cope with inevitable crises from the manager's seat.

Maybe Sosa will rebound. But Minaya and the Mets' staff must strongly consider the possibility that Sosa's decline is permanent, and the scenarios that could evolve because of it. If Sosa is hitting .220 in May, will they be ready to back Randolph if he wants to bench a fading star as he nears 600 career homers? What if Sosa, in a moment of frustration, complains about Randolph's lineup decisions; is Minaya ready to step in, and step on his longtime friend?

Anyone who has been around Sosa say he's extremely sensitive. The Mets need to ask themselves this now: If Sosa struggles and the fans in Shea Stadium start booing him thickly -- as they booed Piazza in 1998, as they have booed many players -- how will Sosa react? Will it make him better? Will it drive him into a shell?

Sosa developed a relationship with the fans in Wrigley Field; they would rise together when he ran out to right field, his right hand extended toward them. There are no stands in right-center field in Shea Stadium, and Mets fans won't care what Sosa accomplished in 1998 or '99. They are greatly frustrated by the direction of the franchise and they want to see progress; if the Mets get Sosa, and he and the team flounder early, he will become the focal point of their raging unhappiness.

Maybe Sosa, with something to prove, will come back and be great again. There is a lot of evidence that suggests otherwise, however, and much reason to think that Sosa would be a disaster with the Mets.

Buster Olney is a senior writer for ESPN The Magazine. His book, "The Last Night of the Yankee Dynasty," is a New York Times best seller and can be ordered through HarperCollins.com.