A newspaper report linking Mark McGwire to steroid use in the early 1990s all but guarantees that steroids will be as much a part of the former St. Louis Cardinals slugger's legacy as home runs, and adds more bulk to the evidence that -- from 1988 to 2004 -- baseball was thick with artificially enhanced stars. 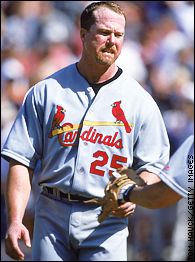 McGwire was known only for the home runs in the marvelous season of 1998, a year in which he wrecked Roger Maris' single-season record of 61 and finished with an incredible 70. Even an Associated Press story that summer about how he used Andro -- a steroid precursor -- did not dampen the enthusiasm. McGwire repeatedly denied using steroids, well into his retirement.

Now the New York Daily News has records that allegedly detail McGwire's steroid use, with the newspaper report coming on the heels of Jose Canseco's published assertions of steroid use by Major League Baseball players.

Dating to 1988, the American League and National League have distributed a total of 34 MVP awards. Of those, the winners of 13 -- almost 40 percent -- have been linked in some way to the steroid controversy, either through personal admissions, grand jury testimony, published accusations or congressional subpoenas.

In the same way, the six greatest single-season home run performances in baseball history -- three seasons of 63 or more by Sammy Sosa; two seasons of 65 and 70 by McGwire; and the 73 homers Barry Bonds clubbed in 2001 -- have been linked in some way to the steroid controversy.

There may be many more revelations to come -- and, ironically, probably for the same reason that some of the steroid users injected themselves: Money. The best-selling success of Canseco's book has demonstrated that anybody who claims to have inside knowledge and is willing to speak out -- and perhaps tell stories about former teammates -- can make some money. As the Daily News story demonstrates, we may be hearing more from personal trainers and steroid suppliers.

All indications are that this controversy won't deter most fans from paying to see games. Even as steroid suspicions swirled around Bonds last summer, the San Francisco Giants led the NL in road attendance as fans presumably flocked to see the player who will probably finish his career as the game's most prolific home run-hitter.

But the achievements of Bonds, Giambi, Caminiti and now McGwire will always be viewed through a clouded prism, instead of through the pure crystal that we remember Aaron, Mays, Robinson and Ruth.

Standing among the living members of 500-home run club before the All-Star Game last summer, commissioner Bud Selig proclaimed this was a golden age of baseball. Since then, two sluggers with him that day have been directly implicated with steroid use and another has been called to testify about steroids.

And history is destined to recall this period as baseball's Steroid Era.

Buster Olney is a senior writer for ESPN The Magazine. Click here to read his blog.