The recent fuss made over Barry Bonds' forthcoming reality show is confusing, really, because it appears that this venture went into production years ago. The first script was rejected, and we discovered the last pages of its proposed series-finale.

July 25, 2010. Barry Bonds sits near a podium in Cooperstown, N.Y. Willie Mays walks slowly to a podium, and the applause is loud, fading slowly, as the crowd waits to hear his words.

"I'm here to talk about the past," Mays says, "and to introduce this young man sitting over here to my right." 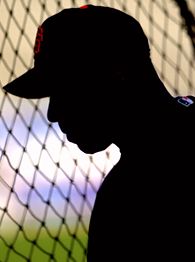 "But let me tell you something you may not know about Barry Bonds. He made choices. The right choices. And that's part of the reason why I can say to you, without qualification or reservation, that this young man is one of the greatest players of all time."

"Everybody who spent time around the game knew by the early '90s that the players were changing, and what they were putting in their bodies was changing. Something more than Wheaties, although none of us knows exactly what.

"Maybe it was those strange words. Winstrol. Stanozol. Deka. Andro. By the summer of 1998, the bodies were huge. Looked like offensive linemen, and everybody in the game knew why. We didn't know for sure, but we suspected. These guys were changing the game, the way the game was played, the numbers.

"And it was that summer that Barry had to make the same choice that all the players in baseball faced. He could change what he was putting in his body, and get bigger and stronger -- freakishly bigger and stronger -- and you know what? There was a chance nobody would find out, or even care. Baseball didn't test for steroids then, and there weren't any penalties. Seemed like the whole industry looked the other way.

"But you know what? This young man sitting to my right felt good about what he had accomplished, in the first 13 years of his career. Four hundred and eleven homers. Over 1,200 RBI. Hell, we already knew he'd make it here one day. He was a great player and we all knew it. And Barry Bonds kept eating Wheaties instead of that other stuff.

"See, my Godson was smart. Remember how he said all along that he didn't care what other people thought about him, and the writers got on him for that? Well, that's how he lived out his career, wasn't it? He didn't let the expectations of others drive him into doing something unnatural, did he? He didn't worry about the numbers that those other big guys were putting up, did he? He was smart enough to realize he didn't need artificially-enhanced greatness. Barry Bonds already had greatness.

"And look at him. Same smiling mug. Same skinny-framed guy he was when he started in 1986, except for that little tire that's growing around his gut, now that he's 46. All natural.

"Sure, the end of his career got a little ugly, as it did for the rest of us. Barry's knees were killing him, but he played through it, for the last five years of his career. He wasn't hitting 70 homers, like some of his peers, but he played the game with the highest possible integrity. Those 25 homers he hit in his last year, in 2004, we can take those to the bank. We can take everything he accomplished at face value.

"He didn't finish his career with as many homers as Henry Aaron, or Babe Ruth, or myself, or Frank Robinson. But Barry was the best player of his generation -- one of the greatest of all time."

"In recent years, you have seen a lot of the stage behind me empty, and you know why. A lot of the Hall of Famers won't come when they presume that the inductees put something in their bodies that wasn't supposed to be there.

"With that, I want to introduce to you my godson, Barry Bonds."

There are cheers, and as Bonds rises from his chair, the Hall of Famers behind Bonds rise, as well, and clap.

But that script wasn't used, apparently. From all indications -- leaked grand jury testimony, the revelations in the forthcoming book "Game of Shadows," and the apparent changes to his body that defy all but a few explanations -- Barry Bonds appears to have chosen a different ending for his reality show.