For most of the past half-decade or so, the Bay Area has had an inordinately large share of baseball's smart general managers. If you require the math, here it is: two teams, two smart guys.

As time has gone on, though, Brian Sabean and Billy Beane have taken two increasingly divergent paths.

Beane is chasing a future in Oakland that may allow him to outlast both his current bosses and the town in which they all do business.

Sabean is holding the future off as long as possible in San Francisco with an assemblage of players, in large part at the insistence of his owners, held together by AARP cards. The GerIANTricS enter the new season with this likely starting lineup:

That's 287 years of life, 108 years of big league experience, and God only knows how much time on the disabled list this coming season. It is an hellishly absurd risk based solely on the Giants' twin pillars of support. Staying credible for as long as Bonds is playing, and putting off the day when they have to use the "R" word. 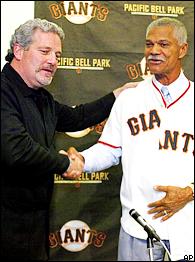 Sabean knows how risky this is, for we established the size and activity of his brainbox. But he works for people who know that their market does not tolerate the "R" word, and are basically squeezing the lemon until it is utterly desiccated, zest and all. If this is what they want, well, he is still taking their checks, and that's how it's going to be. The oldest team ever, and all the senility, incontinence and walker jokes that inspires.

Beane, on the other hand, just finished eviscerating the Athletics' pitching staff by dealing away Tim Hudson and Mark Mulder for less than they were worth, for different reasons entirely.

For one, Mulder and Hudson were going to cost more money than owners Steve Schott and Ken Hofmann want to pay -- making them two new passengers on the Giambi-Tejada Underground Railroad.

For two, the A's are about to be sold to Lewis Wolff, and it is easier to move a business with low overhead than one with a high one.

For three, knowing Beane's fascination with the business end of the game (as opposed to merely the end of the game), he might well be helping with that streamlining to enhance his position in a new ownership group.

If this seems a bit more Machiavellian than you're ready to digest this morning, a lot of things have happened to the A's since Beane moved Hudson and Mulder in the fire sale of the new century. And since Beane isn't one to miss the angles, it seems that the hasty day-of-deal diagnosis (he did all this to cut down on payroll and try to start over again down the road) was only about two-thirds correct.

For one, "down the road" could mean San Jose. Or Las Vegas.

For two, Beane has always had a covetous eye up the corporate step-ladder, toward a piece of the action, and he has always paid attention to the action at owners' box level. If anything was happening on the sale of the team, he was surely among the first to know.

Now he didn't do the Hudson and Mulder deals against Schott's and Hofmann's wishes. He has had a green light with the roster as long as the checks in the outbox had no extra zeroes in them, and any time the payroll got smaller, he got to be Employee of the Month. He could explain the deals any way he wanted to, as long as the bottom line stayed near the bottom.

In every way, the modern middle manager.

But there is more than one reason for lowering the payroll, and selling the company is as valid as any of them. Thus, we have a new explanation for the trades beyond any inexplicable infatuation with Kiko Calero -- long-term business planning.

The thing to understand here is that Sabean could have done it Beane's way given Beane's circumstances, and vice versa. Neither one has the market cornered on brains, and as we have learned repeatedly in baseball history, there is more than one way to skin a cat.

Ray Ratto is a columnist with the San Francisco Chronicle and a regular contributor to ESPN.com