Regrets? Those of us who forecast baseball have had a few.

Watching Anaheim play in the 2002 World Series, it was easy to remember writing about how deep the Angels' pitching staff could be after the offseason additions of Kevin Appier and Aaron Sele, and about noting how well they had played in spring training.

But I can't say I picked them over Oakland and Seattle in the AL West.

Watching Florida play in the 2003 World Series, it was easy to remember how the Marlins had made a run at Bartolo Colon over the winter, believing they were close to winning when no one else did, and how we had seen Ivan Rodriguez have a major impact on winning while in Texas.

But I can't say I even gave Florida a second thought when decided between Atlanta and Philadelphia in the NL East.

The time has come to stop picking the Yankees and Braves every year and start playing hunches. So who's going to be the next team to spring a sneak attack?

The Colorado Rockies are that team.

Kansas City would be a decent call, but the Royals' big surprise was winning 83 games a year ago. Baltimore is obviously going to be improved, but third place must be the Orioles' target. They don't have the pitching to challenge the Yankees and Red Sox.

The Rockies play in the right division. The NL West has historically been a balanced, deep division. It has had a 97-win team in it in five of the last six seasons. But with age and financial reality diminishing Arizona, Rich Aurilia following Jeff Kent out of San Francisco and Los Angeles thus far adding no hitter more significant than Juan Encarnacion, the standard is dropping.

Ninety wins could get it done in 2004. That's 16 more than the Rockies had in 2003, but GM Dan O'Dowd's latest approach just might bridge that gap.

For starters, the Rockies should have won 77 games a year ago, according to Bill James' formula factoring in runs scored and allowed. Assuming the intangible factors of luck and managing balance out, the Rockies can reach 90 with a 13-game improvement in talent.

If Colorado improves and gets lucky, as Florida (+3 in the Pythagorean standings) did a year ago, it could climb above 90 victories. That just might be possible.

Here are five reasons why:

1. There's the obvious thunder in the middle of this lineup. A team that has Todd Helton, Larry Walker, Preston Wilson, Vinny Castilla and Jeromy Burnitz hitting 3-7 is going to score some runs, both at Coors Field and on the road.

The difference between Burnitz and Jay Payton, who he is replacing, is minor. But the Rockies have upgraded in a major way at third base (Castilla), where O'Dowd somehow got tricked into going with Chris Stynes as his primary player a year ago.

And look for a good season from Walker, whose erratic production has been almost of Juan Gonzalez proportions. He has lost a ton of weight (25-30 pounds) and is working out with a strength coach for the first time in his career. If it helps him stay healthy -- he hasn't played 150 games in a season since 1997 -- then the Rockies take a major step toward the first division.

2. The infield has been rebuilt to help a pitching staff heavy on ground-ball pitchers. Royce Clayton remains a vacuum cleaner at shortstop. He and Castilla comprise a massive fielding improvement over the Opening Day lineup a year ago, which had Jose Hernandez at shortstop and Stynes at third.

While Hernandez and Stynes actually ranked higher than Clayton and Castilla in range factor in 2003 (Hernandez was 12th among major-league regulars at his position; Stynes was third), this is more of a reflection of the nature of Colorado's pitching staff than their abilities. Ask any scout.

Clayton and Castilla will not only be more reliable, but will gobble up ground balls. That could be a key to a rebound season for 2002 Rookie of the Year Jason Jennings while helping Aaron Cook establish himself.

Cook, long a minor-league standout, has a 5.69 ERA after his first 160 big-league innings. He sometimes seemed discouraged because of the fielding behind him in 2003, and no wonder. Kevin Brown and Brandon Webb were the only NL starters who threw a higher percentage of ground balls than Cook, who nevertheless saw hitters bat .317 against him.

3. Scott Elarton has finally recovered from shoulder surgery and is ready to assume the potential he showed in 2000, when he won 17 games for Houston. He's been working with pitching guru Bus Campbell, a treaure in the state of Colorado, who helped Roy Halladay turn his career around.

Campbell says that Elarton is ahead of where Halladay was at this time last year. That's scary.

Denny Stark, who was 8-1 with a 3.21 ERA at Coors Field in 2002, is also healthy after a season marred by injuries. The Rockies figure to open the season with Jennings, Stark, Cook and Joe Kennedy as their top four starters.

O'Dowd signed Jeff Fassero (another guy who induces ground balls) with the thought the left-hander can possibly take over the final spot in the rotation. Chin-hui Tsao could factor in for the second half after opening the year at Triple-A. 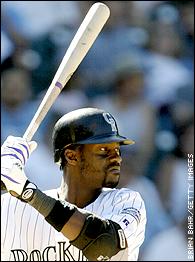 4. Shawn Chacon, an All-Star before being bothered by tendinitis last year, should have success as the Rockies' closer. Jose Jimenez was adequate a year ago, but Chacon has the potential to turn into a major success, along the lines of Eric Gagne.

Maintaining his velocity has been a problem, as it was with Gagne, but shouldn't be an issue working out of the bullpen. The bullpen around Chacon is a concern, however, as the Rockies have lost both Jimenez and set-up man Justin Speier.

5. Aaron Miles was an astute acquisition who could put up Rookie of the Year numbers as the second baseman. He'll have to play well in spring training to win a battle with veteran Damian Jackson, but don't be surprised if he scores 100-plus runs.

Miles, 27, is a late-bloomer who earned MVP honors in the Double-A Southern League two years ago. Without any advanced shortstops in their system, the White Sox gave him up to take a chance on Juan Uribe.

Miles is an intriguing offensive player who seems to fit Coors Field perfectly. He hits for a high average (.313 the last two years between Double-A and Triple-A) and is hard to strike out. He's only 5-foot-8, but is extremely strong. The ball jumps off his bat. He won't steal a lot of bases, but is an exciting baserunner.

Miles and Clayton, who is likely to hit second, will get challenged by pitchers with Helton, Wilson & Co. behind them. That's exactly the kind of scenario that David Eckstein thrived in two years ago with Anaheim. Miles could follow that example, helping the Rockies down the path traveled by the Angels.