CHICAGO -- For more than a decade now, Sammy Sosa has played to the Wrigley Field crowds with delight. He's done his bunny hops out of the batter's box, his heart taps and his trademark sprint along the right-field wall in the top of the first.

Sosa has also made it a habit to be the first out of the clubhouse for a last bit of stretching before the game. He emerges from the third base dugout and takes up temporary residence behind shortstop, igniting cheers and applause that wash over him as he twists and tweaks his chiseled body. 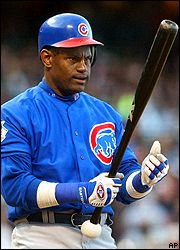 But something strange happened on the afternoon of Aug. 1.

Nomar Garciaparra, the newest Cub, beat Sosa out of the dugout. The old ballpark, packed as usual for this game against Philadelphia, erupted in a welcome that would tell Garciaparra to leave his baggage in Boston. And when Sosa came out a minute or two later, it was almost like no one noticed.

You can bet Sosa noticed.

Sosa certainly noticed over the weekend when he was booed as he was announced during pre-game introductions, as well as every time he came to bat after making an out. His swing seems to get longer, if not harder, the louder the fans go after him.

"You can't tune them out because you hear them, unless he's deaf, which he's not," says Cubs manager Dusty Baker. "It's a different situation. He was held in such high esteem and adoration, and now it seems it's going the other way."

Sosa no longer can count on unconditional love from the fans he thrilled time and time again during his unprecedented run of 243 home runs in four seasons, including three seasons with at least 63. His approval rating has dropped as the price for scalped Cubs' tickets has skyrocketed.

Tim McCarver, working last Saturday's game against the Dodgers, says it is a shame that Chicago fans have become fickle toward Sosa. But these fans would say it's a shame that the aging Sosa has gone into a steep decline at the time when the emergence of a loaded starting rotation, a deep lineup and a winning manager have raised the stakes exponentially for the lovable losers.

Sosa missed 25 games from injury and a humiliating episode with a corked bat during the Cubs' remarkable rise in 2003. He drove in 100-plus runs for the ninth year in a row but wound up with his fewest since 1996. His .279 batting average and .911 OPS were his lowest since '97.

This season has been even worse for Sosa personally. He's already missed 31 games, spending a month on the disabled list with a bad back, and has seen his batting average and production numbers continue their descent.

In a 9-for-50 slump since Garciaparra's arrival, Sosa enters the series at Milwaukee hitting .258 with an .879 OPS. His total of 56 RBI ranks fourth on the team, and it's painfully clear that newcomers Aramis Ramirez, Derrek Lee and Garciaparra, none of whom were in Chicago at the All-Star break a year ago, are Baker's best options with games on the line.

Baker dropped Sosa from his preferred spot in the order, third, to fourth earlier this season. Sosa is hitting only .214 in the cleanup spot, yet Baker has thus far been reluctant to drop him further, admitting that he has to consider Sosa's "sensitive" nature.

This may not mark the end of Sosa's Hall of Fame career with the Cubs but you can see it from here.

Sosa exercised 2004 and '05 options after last season but the choice for '06 belongs to club president Andy MacPhail and general manager Jim Hendry, who were silent when Sosa suggested it would be nice if the club guaranteed him another $18 million for that season.

The Sosa situation is the one truly unsettling dynamic for a Cubs team that is positioned to blow away the competition for the National League's wild-card spot into the playoffs. With Kerry Wood and Mark Prior both healthy, and Greg Maddux again finishing strong, Baker has the best starting rotation in the majors. But every day Baker must either answer, or avoid, questions about Sosa's decline.

Like the Chicago fans, he is not unconditionally supportive of his franchise icon.

Last Friday, for instance, Baker was asked if Sosa was doing everything he can to get out of his slump.

With wrinkled brows, reporters tried to get Baker to explain himself. It was suggested there must be something else to the situation.

When fans first started to boo Sosa, during the St. Louis Cardinals' sweep of a two-game series at Wrigley in July, Sosa admitted he was stung.

"I'm like, 'Wow, what have I done?' " Sosa said. "I give 110 percent every day and it shocked and surprised me to hear that. Probably they want us to win so bad, that's one of the reasons why they react like that. I have been playing the best I can ... Sometimes, when they want us to come through, it's not going to happen every time they wish. I wish it would too. They have to understand a little bit more that we need some support, some love."

Sosa pleaded for some forgiveness.

"We come here every day trying to do our jobs, and sometimes it's not going to be the way we want," Sosa said. "But it doesn't mean we're not good players anymore or that the world is ending."

Always front and center when he is going well, Sosa has long been reclusive when he wasn't hitting home runs with regularity. It's not surprising that he has recently turned away reporters, keeping most of his thoughts to himself.

The reality is that, perhaps like never before in his career, the answer to any of his problems is right there in front of him.

Sosa is no longer being asked to do everything for a weak team. His job now is to do his part in getting a team with a vast upside into a World Series -- territory his franchise hasn't occupied since 1945. If he could help his team win the Series, something that last happened in 1908, he would be as beloved, maybe even more so, than ever. He would be in position to get the contract extension that would allow him to end his career with the Cubs.

MacPhail wouldn't turn his back on a Hall of Famer on a World Series team. But all bets are off it the Cubs don't become a postseason power.

This doesn't have to end unhappily.

"When you start banging, that takes care of everything," Baker said. "That's the key word, banging, and Sammy is going to bang. Count on it."

What other choice does Baker have?