Until his death in 1997, few topics got baseball play-by-play man Mark Holtz more cranked up than the years he worked Triple-A games in Denver.

Holtz would go on and on about the explosive nature of games at Mile High Stadium, whether speaking to one friend or holding the attention of a room full of reporters and scouts. Visitors from out of town would make special trips to the dining room at Arlington Stadium to hear the voice of the Texas Rangers retell the story about the Denver Bears' Fourth of July comeback.

One Montreal prospect after another hit home runs in the last two innings to give Denver a ridiculously unlikely victory before a packed house, which had come as much to watch fireworks as baseball.

More than 25 years and one beautiful $215-million ballpark later, Holtz's story still works to describe the craziness that is baseball at altitude.

Coors Field, the baseball-only heir to multipurpose Mile High, turns 10 years old on Tuesday. Its legacy is of beaten-up, exhausted pitchers, beginning with David Nied, the Rockies' first-round pick in the expansion draft, and extending through the likes of the late Darryl Kile, Mike Hampton and Denny Neagle  as well as the inflated statistics produced by the hitters lucky enough to be based there.

No one has been as lucky as Todd Helton, who has spent his entire career at Coors. He is the only player in history to have hit at least .315 with 25 home runs and 95 RBI in his first seven full seasons. Before him, only Joe DiMaggio had done it six times. Babe Ruth and Lou Gehrig are the only hitters who have ever done this for a longer stretch at any point in their careers.

Yet Helton has never finished higher than fifth in MVP voting. That's because voters have become numb to the diluted offensive totals of this era, especially those produced in the thin air and spacious outfield pastures of Coors Field.

By now, you probably know everything about the advantages hitters have at Coors Field. The ball carries almost 10 percent farther than at sea level, a phenomenon that prompted original owner Jerry McMorris and his general manager, Bob Gebhard, to tell HOK Sports to push the outfield fences way back.

But they might have been better off to just make all the outfield fences like Boston's Green Monster, because without a rover there's no way to cover all of the increased square footage of outfield real estate. Not only is Coors a great place to hit home runs, but it's also an outstanding park for singles, doubles and triples.

Making matters worse, breaking pitches don't have the same bite as they do elsewhere. This might be the worst factor of all, as it carries over for Rockies' hitters on the road. They often need the first few days of road trips to adjust to the normal sharpness of sliders and curveballs  Helton entered 2005 with a .298 career batting average on the road, compared to his .377 mark at Coors  and pitchers cannot get in a groove because of the changing conditions.

Trying to give pitchers a little help, Major League Baseball allowed the Rockies to begin keeping balls in a storeroom where both the humidity and temperature are controlled. The humidity is kept at about 40 percent, compared to the outdoor Colorado climate that often finds the humidity in the teens and sometimes even in single digits.

It had a significant effect in 2002, the year it was introduced, and has remained somewhat effective. However, offensive totals have declined throughout the majors due to a variety of other factors, the biggest of which is probably testing for steroids and other performance-enhancing substances.

Coors remains the best place in the majors to hit, which has even caused some to suggest that MLB should alter the ball to make the game more conventional there.

Because of the toll that playing in Coors takes on a pitching staff, for both the Rockies and their visitors, Henry Schulman of the San Francisco Chronicle proposes that rosters be expanded to allow teams to carry an extra pitcher there. 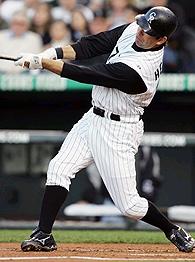 He calls it the DCP  Designated Coors Pitcher.

"I have thought about it because I managed there [in 1981]," said Alou, currently the San Francisco Giants manager. "I managed Triple-A. What a tough time that was. It was very difficult because you leave Denver and you're still managing in Denver. You suffer for a week to 10 days after you go there. After you leave, your pitching staff is a shambles.''

Year in and year out, no one's staff is a bigger mess than the Rockies'. They have had the highest ERA in the National League in all but two years that they've played in Coors  somehow finishing ahead of the salary-purged Florida Marlins in 1998 and Houston in 2000, which was the Astros' first year at Enron Field.

For a couple years there, it looked like the move from the Astrodome to the new retractable-roof stadium named after a soon-to-be-infamous corporation would cripple Houston's franchise. But the ballpark didn't stop Roger Clemens from winning the NL Cy Young Award last season or the Astros from going to the playoffs in two of the past four years.

Despite a variety of plans, including the throwing of about $170 million down a rat hole to sign Hampton and Neagle, the Rockies have not been able to adjust.

That is the biggest legacy of Coors Field. It has left the 16-team National League with only 15 teams that can win, greatly benefiting San Francisco, Arizona, Los Angeles and San Diego, the Rockies' rivals in the NL West.

Sure, the Rockies won the NL wild card in 1995, their first year in Coors. But that was a team without emotional baggage, getting an emotional lift from drawing about 3.4 million fans and, most importantly, playing a 144-game schedule because of the lingering player strike that had wiped out the playoffs in '94.

That '95 Colorado team  the Blake Street Bombers  banged out 200 home runs, 32 more than any other team. But it also allowed 160 homers and finished with the fattest ERA in the league. Don Baylor did a great job of managing to get to a 77-67 record and finish one game ahead of Houston in the wild-card race. The team's Pythagorean record (an estimate of a team's winning percentage given their runs scored and runs allowed) was 72-72, meaning that by rights it should have finished in a three-way tie for fourth in the wild-card race, a full seven games behind the Astros and also behind the Cubs and Mets.

So the only playoff appearance in Denver's major-league history was pretty much a fluke.

Since 1995, the Rockies have come within 10 games of a playoff spot only twice  finishing seven back of the wild card in '96 and seven back in the West in '97.

These were hardly the early expectations for a franchise that has spent heavily on talent throughout its history, finally committing to a full-fledged youth movement only in the past couple of years. The one constant has been 81 games a year at altitude, and it has not been a good thing for anything except hitters' averages.

Jay Payton, who played part of the 2002 season and the entire '03 season in Colorado, says a long year becomes staggeringly long when you're sucking for air.

"Anybody who plays there day in and day out realizes it takes its toll on your body," Payton told the San Diego Union-Tribune. "For me, the high altitude was tough, just being able to breathe. Your muscles and body ache all of the time, you don't sleep the same. It's just different living there, especially if you're not used to it. For me, when I was on the road, my body felt a lot better."

As it was back in the minor-league days, Denver baseball remains entertaining. But if the Rockies don't find a way to win, fans will lose their hope, and a decade from now this franchise could be the Montreal of the early 2000s  only with a much prettier park.