A little after the fact, for some of us, it's become clear how to pick the baseball playoffs -- in each series, just look at the regular-season records and then go with the team that looks less impressive. The key, it seems, is wasting as few wins as possible in the regular-season while advancing into the eight-team tournament.

In head-to-head matchups, the team with fewer regular-season wins went 5-2 in playoff series and has gone 30-17 in series over the last seven Octobers. We could have seen the St. Louis Cardinals coming if we suspended rational analysis and just went with the theory that there are no real upsets in the era of a three-round playoff format.

Oh well. Here's hoping it is easier to forecast the baseball winter than the fall. Here's a preview of the story lines that are going to command the most attention between now and spring training: 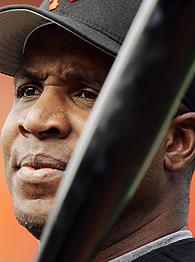 1. The Bonds watch
Barry Bonds, he of 734 home runs, was among the first players to file for free agency after the end of the World Series. His agent, Jeff Borris, says there have been no negotiations with the San Francisco Giants about his returning.

At this point, there don't appear to be a lot of teams lining up for the privilege of having the scandal-diminished slugger hit home runs Nos. 755 and 756 in their uniforms. Even the Giants seem to want to bring him back only if he loses the attitude and accepts the fact that guys who hit .270 with 26 home runs don't make $18 million.

Who knows what Bonds really thinks? "A lot of players are somewhat nervous or apprehensive about becoming free agents because of all the uncertainty," Borris told the Associated Press last weekend. "Barry has nerves of steel. That's also evident in the way he plays baseball."

With Felipe Alou out and Bruce Bochy in as manager, the Giants are a team in transition. They figure to lose their best pitcher, Jason Schmidt, to free agency and will be in a rebuilding mode next season.

Once a Gold Glover, Bonds has become a major liability in left field. If any team is going to make a move to pick up Bonds, it seems almost certain that it would be one of the 14 in the American League.

Oakland would have been a real possibility if not for just having been led to the playoffs by another designated hitter off the scrap heap, Frank Thomas. The A's and Thomas appear to be moving toward a two-year deal to bring him back, but Bonds could enter the picture if those talks hit a dead end.

None of the other 13 teams has even hinted at interest in bringing the circus to town.

Prediction: The new labor deal eliminated the requirement that would have forced the Giants to offer Bonds arbitration or re-sign him by December, so don't expect a resolution on this before January. In the end, he'll stay with the Giants for one more season.

2. Who will follow Lou Piniella to Wrigley Field?
Having seen the White Sox pass them in television and radio ratings a year ago, the Cubs are more motivated to import talent this winter than any of the other 29 teams, including the Yankees and Mets.

John McDonough, named as interim club president after Andy MacPhail's ouster, set the bar high for GM Jim Hendry by saying the goal was to win the World Series "next year and the year after next.'' Hope that he can deliver quickly is why Piniella was the choice over Joe Girardi to replace Dusty Baker as manager.

After years of counting on the arms of Mark Prior, Kerry Wood and Carlos Zambrano to get them to the top, the Cubs are addressing holes in their lineup and the rotation (if Wood is back, it will be as a reliever). Hendry is in the market for a run-producing bat and two starting pitchers. He says payroll will not stop him from filling his needs, which has prompted speculation that the Tribune Co. has agreed to raise the payroll by as much as $20 million, up to about $115 million.

The Cubs will be in the market for Alfonso Soriano and the top three free-agent pitchers on the market -- Japan's Daisuke Matsuzaka, Barry Zito and Schmidt. Before they do that, however, they must convince third baseman Aramis Ramirez not to exercise an early-out clause in his contract.

Prediction: Ramirez will be the first of a few players to get fat deals from a desperate organization, as the Cubs have few spare parts to trade. If Ramirez does leave, the Cubs will make sure they don't get outbid for Soriano, who could wind up playing center field.

3. It's all about the pitching
Almost every team in the majors is dealing with major pitching issues, including the World Series champs. Jeff Suppan and Jeff Weaver used the postseason to put themselves high in the tier of likely free agents behind Matsuzaka, Zito and Schmidt, and St. Louis GM Walt Jocketty will have to replace them if they become too expensive for him to re-sign.


A lack of healthy pitching doomed the Yankees and the Mets, which means they are going to be driving the bidding for the biggest names. When the signing period arrives, teams will have to decide whether they have a realistic shot at Matsuzaka, Schmidt and Zito or if they should turn their attention to guys like Ted Lilly, Suppan and Weaver, while they are available.

The White Sox are the one team that might have pitching to trade. They are expected to deal Jose Contreras, Freddy Garcia, Javier Vazquez or even Mark Buehrle to open up a spot in the 2007 rotation for Brandon McCarthy, who has been wasted in the bullpen. Also, the White Sox would like to add a set-up man or two to work in front of closer Bobby Jenks.

Because teams have focused on the flaws of Zito (incredibly reliable but with diminished stuff, witness one strikeout in 11 2/3 playoff innings) and Schmidt (nagging injuries, reduced velocity) the last few months, the mysterious Matsuzaka has moved to the top of the list of free-agent pitchers.

He is a restricted free agent in Japan, subject to the same "posting'' process as Ichiro Suzuki when he went to Seattle in 2001. The commissioner's office essentially runs a blind auction for his services, with the Seibu Lions selling the right to negotiate with him.

Prediction: Seattle strikes again to sign Matsuzaka, a move that will convince Suzuki not to go looking for greener pastures when his deal expires after next season. The Mets outbid the Dodgers for Zito and Schmidt winds up with the Cubs. At least two other Japanese starters accompany Matsuzaka to the United States, including Hiroki Kuroda, an unrestricted free agent.

4. Will the Yankees trade Alex Rodriguez?
"I've never run from problems,'' says Alex Rodriguez. "My commitment is 100 percent unconditional  [New York] is the only place I want to play.''

Yankees GM Brian Cashman says he's not looking to trade Rodriguez, and agent Scott Boras says there won't be a Rodriguez trade. He should know, as Rodriguez has a full no-trade clause. Yet this rumor won't die until Rodriguez actually shows up in Tampa next February, once again taking grounders alongside Derek Jeter.

The thought of Rodriguez surfacing elsewhere -- with the Los Angeles Angels, Cubs or White Sox -- is too sexy to be left alone for long. After all, remember when Texas was saying that it wasn't going to trade Rodriguez -- and then essentially pulled off two trades, including the one with Boston that was shot down by the players union.

Prediction: There will be more smoke over the winter, but not a fire. Rodriguez won't go anywhere. However, at least two other stars with American League East teams will. Look for Baltimore to finally deal Miguel Tejada and Boston to find a taker for Manny Ramirez, even if it has to pay some of the salary to move him.

5. Steroids, steroids, steroids
No, this story isn't going away any time soon. Baseball's slow response to the spread of performance-enhancing drugs is never out of view for long. That story will be bigger than ever when George Mitchell's committee issues its report.

There is no timetable for its release, but January seems like the first logical time. That would allow commissioner Bud Selig to weigh possible suspensions to Bonds, Jason Giambi and any others implicated in the findings and give the sport time to absorb the hit before the start of spring training.


One way or another, steroids are going to be in the news in January. That's because Mark McGwire is on the Hall of Fame ballot for the first time.

Big Mac would have figured to have been a first-ballot Hall of Famer before declining to discuss the past at the congressional hearing in March 2005, but now seems certain to fall far short as Cal Ripken Jr. and Tony Gwynn easily meet the 75-percent requirement for election.

Prediction: The Mitchell report, whenever it is released and whatever it actually says, is panned for not exposing an industry-wide conspiracy to use home run hitting to help baseball recover from the 1994-95 strike. McGwire is named on only 20 percent of the writers' ballots.

Phil Rogers is the national baseball writer for the Chicago Tribune, which has a Web site at www.chicagosports.com. His book, "Say It's So," a story about the 2005 White Sox, is available at bookstores, through amazon.com or direct order from Triumph Publishing (800-222-4657).