CHICAGO -- Lou Piniella has learned to bite his tongue, but he hasn't mastered the art. That became clear when he finally snapped on his second weekend with the Chicago Cubs.

On a day when his ace, Carlos Zambrano, couldn't hold the 5-0 lead he took to the mound in the fifth inning, Piniella was asked by a reporter what wasn't working for his team.

"What the hell do you think isn't working?'' Piniella shouted. "You see the damn game.''

Before momentarily losing his temper, Piniella had made a cryptic comment about the team he inherited from the widely respected Dusty Baker, sacked after a 96-loss season in 2006. 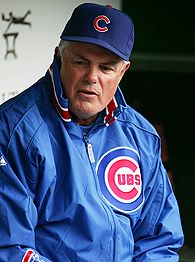 "I can start to see some of the ways this team has lost ballgames,'' Piniella said. "I can see it. We have to correct it.''

So much for miracle cures.

The hiring of Piniella and an offseason spending spree that saw general manager Jim Hendry commit almost $320 million to contracts were supposed to restore the competitiveness of a team that returned to its shabby past after coming within five outs of reaching the World Series in 2003. But the Cubs stumbled out of the gate, as usual, losing their first three games at home during a 4-7 start that renewed questions the winter's activity had failed to answer.

Why can't the Cubs win? Are they significantly improved after adding Alfonso Soriano, Ted Lilly, Jason Marquis, Cliff Floyd, Mark DeRosa and Daryle Ward? Will Piniella come to regret following the likes of Jim Riggleman, Don Baylor and Baker to a franchise that has been a graveyard for managerial careers?

The view here is give this a little time.

It might take a while for the improvement to become obvious, for Piniella to get a firm handle on his personnel and settle into a plan that works best.

He has an inventory of talent that includes solid veterans with shelf life (most notably Derrek Lee, Aramis Ramirez, Soriano, Cesar Izturis, Lilly, Marquis and the set-up combination of Bob Howry and Scott Eyre) and an intriguing cast of characters with something to prove, including Rich Hill, Ryan Theriot, Matt Murton, Felix Pie, Michael Wuertz, Sean Marshall, Carlos Marmol and, before too long, perhaps Tyler Colvin and Jeff Samardzija.

The parts are in place for the Cubs to have a winning season in 2007, maybe even compete for a playoff spot, and they should be in solid shape for future seasons, especially if they can succeed in re-signing Zambrano. The Tribune Co.'s sale of the team next winter should bring a fresh start under an owner seeking instant credibility, which is never a bad thing for a GM's checkbook.

Here are five reasons why the Piniella era should be better than the seven years Baker and Baylor were in charge:

1. Mark Prior and Kerry Wood are now a side dish, not the main course.


Nothing haunted Baker more than the injuries that left Wood and Prior with only 32 victories during 2004-06, the same total they combined to win in the Hollywood season of '03.

Both opened the season on the disabled list, again, but in reality have been on Piniella's back burner since he accepted the job in October. Piniella wasn't going to get caught counting on them, so the injury updates have become notebook material for the newspapers, not top-of-the-section headlines. Piniella seems ready to move on, putting the onus on the pitchers to prove that they can contribute before they get back on the Wrigley Field mound again (if they ever do).

2. Soriano will bring joy back to the ballpark.
He's a stylish player with plenty of substance, an excellent example in the clubhouse, and Piniella will be on to something good when he pairs Soriano in the outfield with his fellow Dominican, Pie, who this spring looked like a mirror image of Soriano.

Predictably, Soriano is not off to a fast start as he adjusts to his uncomfortable home park and the raw weather that has followed the Cubs. The expectations that followed his eight-year, $136 million contract might also be weighing on him, but there's little doubt that he will hit.

Soriano wants to stay in the leadoff spot but his ability to drive the ball gives Piniella options, especially if Theriot shows that his .392 career on-base percentage is not a fluke. Like Murton (.301 average in 202 big league games), Theriot makes the most of the chances that he's gotten. The Cubs haven't developed many position players like that since Mark Grace and Jody Davis were kids.

The gifted Pie (batting .438 at Triple-A Iowa) is stuck in the minors because Piniella wanted to take a chance with Jacque Jones and Hendry couldn't resist signing Floyd, whom he has known since Floyd's days at Thornwood High in Chicago's south suburbs.

Hendry and some others in the organization also aren't sure Pie is a disciplined enough hitter to lay off curveballs. By taking nine walks against only four strikeouts so far this season, the kid is trying to show he's ready. He's going to be in the mix at some point this season.

Soriano and Pie are destined to play alongside each other for many years. This will be a good thing, because Pie is a gifted fielder and a team player. He can also run like the wind.

Under Baylor and Baker, the Cubs weren't athletic enough. Soriano and Pie are the exact kind of players they were missing.

3. The Cubs should win more than they lose in the late innings.
Under Baylor and Baker, the Cubs' bullpen generally left a manager picking the lesser evil. Hendry prioritized it as an area that had to improve before 2006 and Piniella seems more likely to get better results than Baker, who was not a good handler of pitchers.

Closer Ryan Dempster will never scare an opponent, and left-hander Will Ohman has already drawn Piniella's ire for walking hitters on "30- and 40-foot curveballs,'' but the most encouraging number from the first two weeks of the Cubs' season is the 2.81 earned run average from the bullpen.


Howry and Eyre are a set-up combination that any contender would welcome, and Piniella seems smart enough to finally value Wuertz. This guy has gotten a much higher percentage of outs than the Cubs' higher-paid relievers over the last three seasons but somehow remained the 12th man on a 12-man staff, when he was shuttling back and forth to Iowa.

"That flight is no fun,'' Wuertz said, referring to the trip from Chicago to Des Moines, Iowa.

Here are surprising numbers: In parts of four seasons, the unsung Wuertz has struck out 167 while allowing only 118 hits in 148 2/3 innings. He's not blessed with a mid-90s fastball, so he's not going to be appreciated until he has built a volume of work. But there's no reason he can't be a better version of Shigetoshi Hasegawa, who did good work for Piniella in Seattle.

Marmol, who struck out 10 in 5 1/3 innings for Iowa on Saturday, could also evolve into a bullpen weapon.

4. Tim Wilken is the Cubs' secret weapon.
No team in the majors has had more high draft picks the last 20 years, and there hasn't been nearly enough to show for them. Wilken, highly respected for his work in Toronto and Tampa Bay, replaced John Stockstill as scouting director in 2006 and got terrific results in his first draft.

Hendry left Wilken without a second-, third- or fourth-round pick after signing ranked free agents Jones, Howry and Eyre, yet Wilken worked wonders. Samardzija, the Notre Dame wide receiver who would have been a high NFL pick if the Cubs hadn't money-whipped him, has No. 1 starter stuff. Colvin, a left-handed hitting outfielder, could join Samardzija in moving fast and arriving with an impact. Chris Huseby, Drew Rundle and Billy Muldowney could also turn out to be excellent middle-round picks.

Wilken will operate with the third overall pick this year. That's a very good thing.

5. Winning matters.
After the Cubs reached the doorstep of the World Series in 2003, ownership/management expected Wood, Prior and Greg Maddux to do more than their share of heavy lifting. Hendry and then-club president Andy MacPhail didn't push for an increased payroll after a disappointing 2004, allowing Baker to be handicapped by the $17 million that had to be spent to sever ties with Sammy Sosa.

Not even the White Sox's winning the 2005 World Series seemed to cause the Cubs much pain. But things changed when the Sox finished ahead of the Cubs in radio/TV ratings last season. There was a culture shift in the front office after John McDonough replaced MacPhail as president in October, and it was that shift that prompted Piniella to make Wrigley Field what he says will be the final stop of his career.

With Tribune Company purchaser Sam Zell putting the team up for sale, details about the future are shaky, but not the direction. The team is going to wind up in the hands of a Chicago-based group with deep roots and -- like the Tribune in 1981 -- the goal will be to win as quickly as possible. Hendry (or his successor, if 2007 winds up a flop) should have more money to spend next winter.