For the past two years, the scouting and statistics communities have feuded like members of rival families. Baseball lifers who evaluate players with their eyes are derided as over-the-hill beanbags who don't understand the next frontier. Numbers-oriented people are cast as cold, computer-wielding propellerheads with no appreciation for scouting intangibles. Not surprisingly, the camps have grown so polarized that they have retreated to their respective bunkers rather than engage in open and intelligent debate.

Instead of reporting on the gulf between the two sides, Baseball America is bringing them together. For the first time since the great "Moneyball" debate began two years ago, we have gathered two longtime scouts and two statistics experts to discuss all the great issues in this arena: the risks of high school pitchers, the use of minor league statistics, plate discipline as a tool and much, much more.

The four participants were Gary Hughes, the Cubs' assistant GM and a scout for over 30 years with many clubs; Eddie Bane, the Angels' scouting director and a former top pitching prospect himself; Gary Huckabay, one of the lead analysts for Baseball Prospectus and a statistical consultant for the A's; and Voros McCracken, another top numbers man who also consults for the Red Sox. All four were eager to finally sit down with the other side, debate these issues and -- most importantly -- let Baseball America readers listen in afterward.

Never before have these two sides gathered in such a public forum. We now invite you to pull up a chair ...

ALAN SCHWARZ: To start out, Gary Hughes, how would you characterize the relationship between the scouting community and the statistics community?

GARY HUGHES: I think the longtime scouting guys, probably the initial reaction is to get their back up and try to defend their position. They feel somewhat threatened by it because of all the publicity that's come out. It's probably become somewhat of an adversarial thing for maybe not a lot of well thought-out reasons.
A lot of what scouts feel they do is based on gut instinct, their history of being in the game. Their experience. They have a hard time quantifying it. And they see all these things in charts and graphs and things, and maybe when you don't understand something, you feel a little challenged by it.

EDDIE BANE: It is adversarial right now. Our guys, the so-called old-school guys, the thought is out there that we don't know how to handle a computer and we wouldn't know how to use that stuff. I'm very comfortable with a computer. Our people are very comfortable with a computer. We do have to drag some of our old-time guys through it. But the main adversarial thing is that some of our old-time guys are losing jobs that we didn't feel they should be losing. It was due to cutbacks. Maybe the cutbacks were due to money or whatever. But we correlate it to the fact that some of the computer stuff is causing that. And we resent it.

ALAN SCHWARZ: Gary (Hughes), is there less of a need for scouts today, compared to 25 years ago?

GARY HUCKABAY: And it costs a lot in terms of upside. You can talk about high school and college players all you want, but the reality is some of these high school kids are gonna be superstars, and if a club's not looking at them, that's a serious opportunity cost.

VOROS McCRACKEN: The lower-revenue teams are in a bit of a bind when it comes to high school prospects because they are more of an unknown. It becomes difficult for a team that's not bringing in that much in terms of revenue to take a big-money chance ...

GARY HUGHES: Why are they an unknown? I don't understand. Because of the data?

VOROS McCRACKEN: Because a player who is 21 is simply closer to his peak abilities than a player who's 18, for starters.

EDDIE BANE: My point would be that the reason to have at least as many scouts, if not more, is when you're drafting Marquis Grissom, as Gary Hughes did with Montreal from Florida A&M, he doesn't cost $100,000 anymore, he costs a million maybe. And his stats at Florida A&M can be thrown out the window. Because you need to see him in the two games a year that he plays against a pitcher that might have any ability whatsoever. That would be my reasoning to have more evaluators see this guy, because the bonus money is going to be astronomical on a guy like that if you have the guts to take him that high. Gary didn't care what his stats were. A player at UConn, his stats, compared to a guy that I'm watching in the Pac-10, mean almost nothing to me. I'm in the middle of a negotiation right now (with Jered Weaver) where a guy wants to compare our first-round pick's stats to Mark Prior's. And to me, there's no correlation whatsoever. 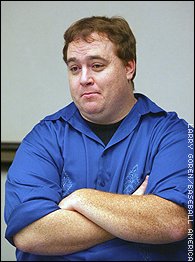 VOROS MCCRACKEN: My response to that would be that those sorts of things, say the difference between playing at Cal and playing at Florida A&M or UConn, you can study those sorts of things and find out what do the stats mean at UConn, what do they mean at Florida A&M, what do they mean at Cal? It's not as if we treat a guy like Rickie Weeks, his stats at Southern -- he had ridiculous stats at Southern, in a weak conference -- the same as if he was playing for USC or Arizona State. Those kinds of things are studied. You can find out information.

Obviously, I don't think it's useful to draft players simply based on their stats. The issue I would bring up is that for all of these issues -- level of play, the type of pitchers, his raw abilities like his speed, his strength, his size -- these are all things that can be, to an extent, measured. Six-foot-1 is a measurement. Five-foot-7 is a measurement. Hitters who are 6-1, do they turn out better than hitters who are 5-7, with similar stats at similar schools? These are the sorts of things that people can analyze, and I think it could provide useful information.

GARY HUGHES: All your statistics are going to tell you is what a guy has done. Somebody has got to make the decision on what the guy's gonna do.

VOROS MCCRACKEN: I have no idea what the guy's gonna do. But my point would be, the scouts also have only a limited idea of what the guy's gonna do. He might do this, he might do that, he might be somewhere in the middle. What you're trying to do is you're trying to take the guys who you think have the best chance. I fully admit that you can't tell the future via stats. My point is that scouting has that equal amount of unpredictability. You can only know so much. You're scouts, you're not fortune tellers.

GARY HUCKABAY: I think it's important to understand that a lot of people have overclaimed what you can do by statistical analysis. It's a tool. A car is a tool as well -- you can use it to drive to the store, or you can use it to drive into a tree. I think there's more of a dichotomy between good statistical analysis and bad statistical analysis. But all the information you can get your hands on -- as long as you understand what it's good for, and what its quality is -- is always a good thing. We're all after the same thing here: We're out to build a great baseball team. As long as you have X number of pieces of information, whether it's performance data -- a term I prefer to use rather than statistics, because these things are records of what happened on the field -- and then also, if you've got people who have tremendous insight who are well trained, they know how to scout a guy, give me that information too. I want both of it. What I don't want is someone going, "I want this guy because he had 120 RBIs."